This appendix provides an overview of the data sources used in the report. It then describes statistical methods used to summarize differences between men and women, including regression analysis methods. Next, it discusses the meaning of the term “gender” in the context of this report. Finally, it concludes with discussion of the thresholds of religious commitment used in this report.

While the April 2015 report focused on total population statistics, this report on gender differences presents for the first time distinct patterns of religious affiliation among men and women within 192 countries that were analyzed for the April 2015 report. The methodology for that report describes how religious affiliation data were estimated using data from more than 2,500 censuses, surveys, population registers and other sources. A list of the primary sources used for each country also is available.

As for the data on various measures of religious commitment presented in this report, they come from a variety of surveys carried out by Pew Research Center between 2008 and 2015. The surveys included:

Pew Research Center’s spring surveys that measure global attitudes in 25 to 40 countries also collect some data on religion. They ask questions about four indicators of religious commitment: religious affiliation, prayer frequency, frequency of attendance at worship services and how important religion is to a person (salience). This report uses data on these indicators collected during the 2011, 2013 and 2015 Global Attitudes surveys. Details about methods used in the 2011, 2013 and 2015 global attitude surveys are available online.61

Because this report relies on data collected by Pew Research Center, it benefits from consistency in survey questions, as well as rigor and transparency in methods and survey design. Surveys from other organizations were examined to help provide additional data in countries without Pew Research Center information. However, they were not ultimately incorporated into this report because their question wording and response categories differed from Pew Research Center surveys, limiting comparability. Others may build on the Center’s research by replicating the analysis presented here with other datasets and by extending the line of research to analyze religious commitment in countries not covered by this report.

The estimates of global religious affiliation in Chapter 1 are weighted by the size of populations within each country. In the rest of this report, data from each country are weighted equally without taking population size into account when calculating averages across all countries.

Because this report aggregates data from a wide range of surveys with complex designs, summary measures of the average differences in religious commitment levels between men and women across all countries are not classified in terms of statistical significance. Rather, the report calls attention to the substantive significance or insignificance of these cross-national averages. Additionally, the report counts the number of countries in which women are more religious, men are more religious, or differences are not statistically significant for each measure.

In order to have sufficient statistical power to make comparisons, this report examines only differences between men and women when the sample size for a particular religious group within a country has at least 300 survey respondents.

How data on labor force participation were analyzed

The findings presented in Chapter 7 of the gender gaps between women by work status and men on daily prayer, weekly attendance and the importance of religion were calculated using the same methods employed in the rest of the report; this accounts for country-specific clustering and weighting associated with complex survey design. (See sidebar starting on page 59.) In addition, researchers used multivariate regression techniques to test whether differences by women’s work status persisted after adjusting for other demographic factors. For each measure of religious commitment, researchers estimated binary logistic regression models where religious commitment (weekly attendance, daily prayer, religion is “very” important) was predicted by a three-category variable that combined gender and work status (all men, women in the labor force, and women not in the labor force), as well as age (18 to 29, 30 to 49, 50 and older), marital status (married, cohabiting, widowed, divorced, separated, never married), relative educational attainment (high vs. low, in order to compare across countries), religious affiliation and country (dichotomous indicators for each country). While the number of respondents surveyed in each country varied, all respondents were weighted so each country had equal influence in the analysis. From these models, researchers calculated average marginal effects for women in and out of the labor force relative to men using the margins command in Stata. 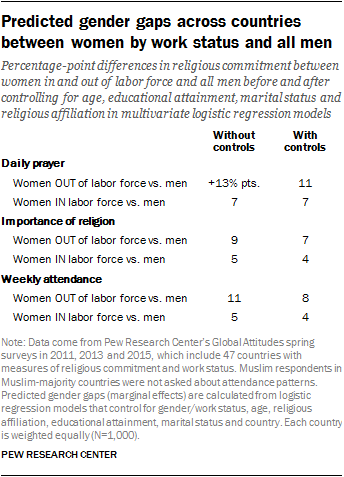 Researchers tested whether the results differed between Christians and Muslims on daily prayer and importance of religion (there were not enough Muslims to permit analysis on weekly attendance by religion). On daily prayer, there were significant differences between the two religious groups. For Christian women, being in the labor force was associated with lower religiosity and a smaller gender gap with men. Muslim women, by contrast, had similar levels of daily prayer, regardless of their labor force participation. This difference between religious groups was not found in importance of religion.

The second analysis, which examined the association between female labor force participation rate and the overall gender gap at the country level, relied on multiple data sources for a broader set of 81 countries.64 The religious gender gaps in daily prayer, importance of religion and weekly attending for the general population in each country were measured using the best available Pew Research Center surveys (see Sources, Appendix C). Data on women’s labor force participation rate came from the United Nation’s 2015 Human Development Report.

Linear regression models also showed that the negative association between women’s labor force participation and the gender gap in daily prayer at the country level among predominantly Christian countries remained statistically significant after controlling for gross national income per capita. Gross national income per capita is an indicator of economic development and was measured using data from the United Nation’s 2015 Human Development Report. The association between women’s labor force participation and the gender gap in the importance of religion among predominantly Christian countries was statistically significant after controls, but differences in the association between countries by largest religion (Muslim, other groups) were not significant. Among predominantly Muslim countries, this difference was largely due to an outlier country, Algeria, which had low levels of female labor force participation and a large gender gap. When Algeria was removed from the analysis of religion’s importance, the interaction term for predominantly Muslim countries was statistically significant before controlling for income and marginally significant (p-value = 0.52) after controlling for income.

Definitions of ‘sex’ and ‘gender’

Respondents to surveys used in this report were not usually asked directly about their gender identity, regardless of whether they were interviewed face to face or by telephone. Rather, interviewers coded interviewees as male or female.65 This report does not distinguish between transgender people, whose gender is different from their sex assigned at birth, and people whose gender and sex assigned at birth are the same. Pew Research Center asked about transgender identity and religion in a 2013 survey of LGBT Americans, but there were too few transgender respondents to make statistical comparisons. The Center has not asked about transgender identity in international surveys.

Social scientists often make a conceptual distinction between sex and gender. In general, “sex” is used to refer to biological differences between males and females, e.g., differences in anatomy, physiology and hormones, while “gender” refers to the social categories of men and women and the different rules and expectations for behavior, appearance and temperament that accompany those categories.66 Gender also is thought to be more fluid than sex – not only can men and women act or dress in ways that make them appear more or less feminine or masculine, but, in the case of people who identify as transgender, one’s gender also can differ from the sex assigned at birth.

When discussing differences in religiousness between men and women in this report, we use the term “gender gap” first and foremost for methodological reasons: In our surveys, we do not ask respondents about their physiological traits or verify whether respondents’ gender corresponds to their sex assigned at birth. For this reason, it would be inappropriate and potentially misleading to some readers to refer to “sex differences” in religious commitment when we have information only on respondents’ gender. At the same time, by using the term “gender” rather than “sex,” we are not claiming that gender differences in religious commitment are only social and not rooted, at least in part, in biology. While social scientists disagree about the degree to which biological and social factors explain one’s level of religiousness, it is possible that both sets of factors play some role and may even reinforce one another to produce religious differences between men and women. (See Chapter 7 for information on the theories about the religious gender gap.)

This report analyzes gender differences in the shares of men and women who report high levels of religious commitment. Other researchers have sometimes chosen lower thresholds of religious commitment to measure the gender gap – e.g., whether religion is merely “important” as opposed to “very important,” or whether one attends services at least monthly as opposed to weekly. In some cases, lower thresholds for religious commitment yield different results for the gender gap in a given country. There are sometimes larger gender differences at lower levels of commitment in less religious countries. For instance, in Germany, where 22% of women and 19% of men say religion is “very important,” a much larger share of women than men (60% vs. 47%) say religion is at least “somewhat important.” 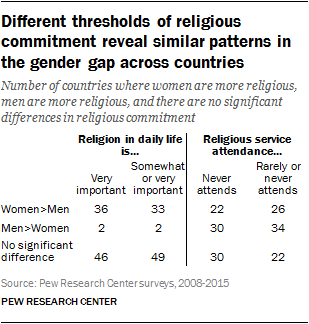 Given the global focus of this report and the inclusion of highly religious countries in sub-Saharan Africa and the Middle East and North Africa, which often have been overlooked in prior studies, Pew Research Center chose a relatively high threshold of religious commitment to compare across countries. Other studies that focus on countries in Europe or the Asia-Pacific region, which tend to be less religious than countries in other regions of the world, might make different decisions about the appropriate threshold for comparison. Even so, there were similar gender patterns across countries in the importance of religion, regardless of whether the threshold was “very important” or “somewhat important.” In most countries included in this report, the significance and direction of the gender gap did not change when the lower threshold was considered. So, for example, when asked if religion was “somewhat important,” the gender gap was no longer significant in nine countries and became statistically significant in six countries.

The Gender Gap in Religion Around the World 1. Women more likely than men to affiliate with a religion 2. Gender differences in worship attendance vary across religious groups 3. Women report praying daily at higher rates than men 4. Religion is equally or more important to women than men in most countries 5. Women and men about equally likely to believe in heaven, hell and angels 6. In the U.S., religious commitment is high and the gender gap is wide 7. Theories explaining gender differences in religion About this report Acknowledgments
Appendix A: Methodology
DataMethodsDefinitions of ‘sex’ and ‘gender’Consequences of alternate thresholds for measuring religious commitment