Compared with some other economically advanced countries, religious commitment in the United States is exceptionally high. When it comes to daily prayer, religion’s importance in people’s lives and weekly attendance at worship services, Americans of both genders display greater religious engagement than their counterparts in Canada, Germany, Australia, France and the United Kingdom, Pew Research Center data show.28

For example, 64% of American women and 47% of American men say they pray daily. Of the five other economically advanced countries analyzed, Canada comes closest to the United States on this measure; 30% of women and 28% of men in Canada say they pray daily. In France, by comparison, 15% of women and 9% of men report praying daily. Similar patterns are seen on the measures of religion’s importance and attendance at worship services: American men and women both display higher levels on these measures than men and women in the five other countries.

The U.S. also stands out for having consistently wider gender gaps than any of the other five countries.29 In daily prayer, religion’s importance and weekly attendance at worship services, American men and women differ from each other to a greater extent than men and women differ in Canada, Germany, Australia, France and the United Kingdom (see below graphic).

Looking at daily prayer, for example, the 17-percentage-point gap between American women and men (64% vs. 47%) is nearly double the 9-point gap in the United Kingdom (23% vs. 14%), and it dwarfs the 2-point gap in Canada (30% vs. 28%).30 The measure on importance of religion displays a similar pattern. Fully 60% of American women say religion is very important in their lives, as do 47% of men, a 13-point difference. Meanwhile, in the United Kingdom, women and men differ on this measure by only 6 percentage points (24.7% vs. 18.3%); in Australia the gap is only 7 percentage points (21.3% vs. 14.7%). Gender differences on religion’s importance are even smaller in Canada, France and Germany.31 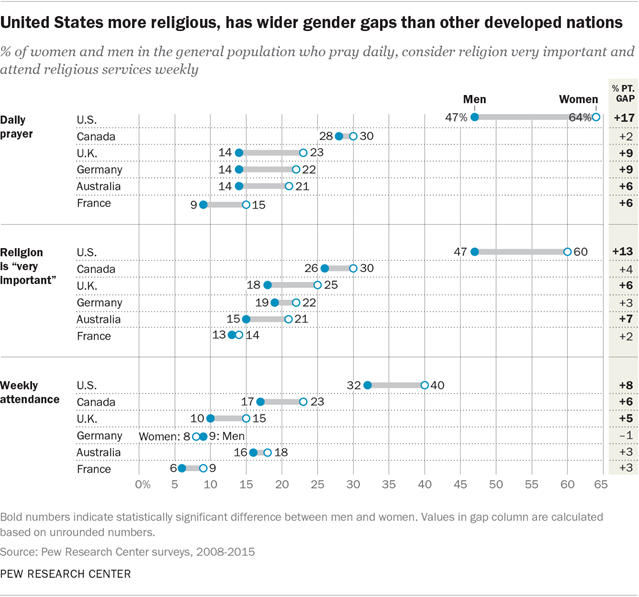 A similar pattern is seen when differences between men and women in the United States on various measures of religious commitment are compared to average gender differences found in Pew Research Center surveys in up to 83 other countries. The U.S. gender gap is often larger than the average.

In daily prayer, for example, the 17-point gap between U.S. men and women far exceeds the average 7-point gap across 83 other countries. Similarly, the 13-point gender gap between American men and women in the importance of religion is considerably larger than the 5-point average gap across a similar number of countries. In both cases, the U.S. gender gap is not the largest of all countries, but it is above average.32

In many countries outside the United States, the religiously unaffiliated share of the population is not large enough to garner a sufficient number of survey respondents (300) for reliable comparison between men and women. However, there are 13 countries with sufficiently large unaffiliated populations, including the United States, where such analysis is possible. Data from Pew Research Center surveys in these countries indicate that the gender gaps among unaffiliated Americans generally are larger than the overall averages from the 12 other countries.

The Gender Gap in Religion Around the World 1. Women more likely than men to affiliate with a religion 2. Gender differences in worship attendance vary across religious groups 3. Women report praying daily at higher rates than men 4. Religion is equally or more important to women than men in most countries 5. Women and men about equally likely to believe in heaven, hell and angels
6. In the U.S., religious commitment is high and the gender gap is wide
7. Theories explaining gender differences in religion About this report Acknowledgments Appendix A: Methodology