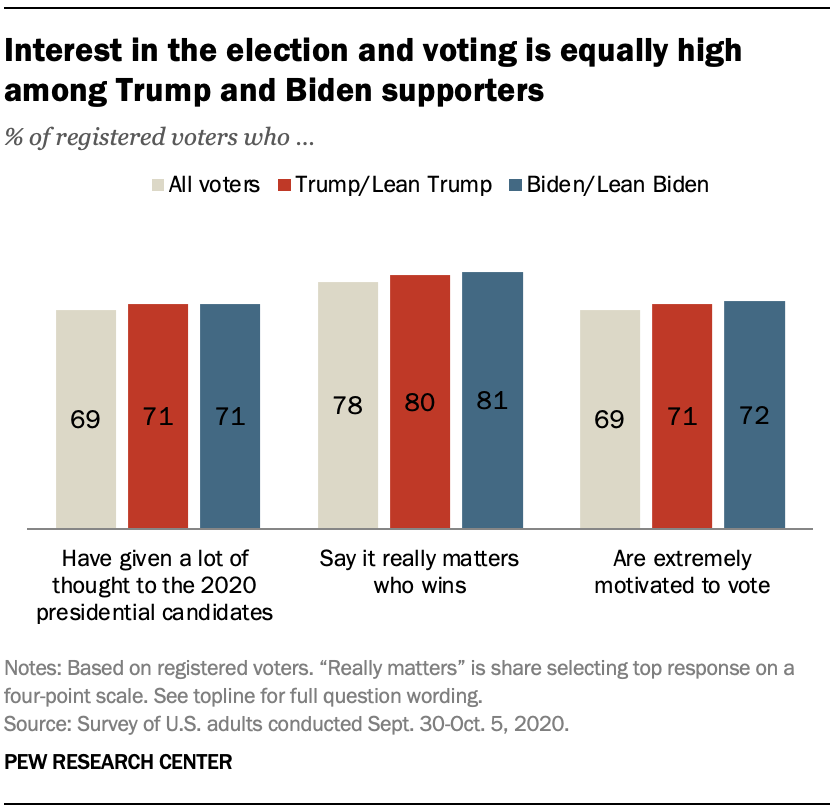 Voter engagement in the presidential election remains quite high. And interest and motivation to vote is equally strong among registered voters who support Donald Trump and those who favor Joe Biden.

On three measures of interest in the campaign and voting, there are no significant differences between Trump and Biden supporters.

Similarly, 80% of Trump supporters and 81% of Biden supporters say it really matters who wins. 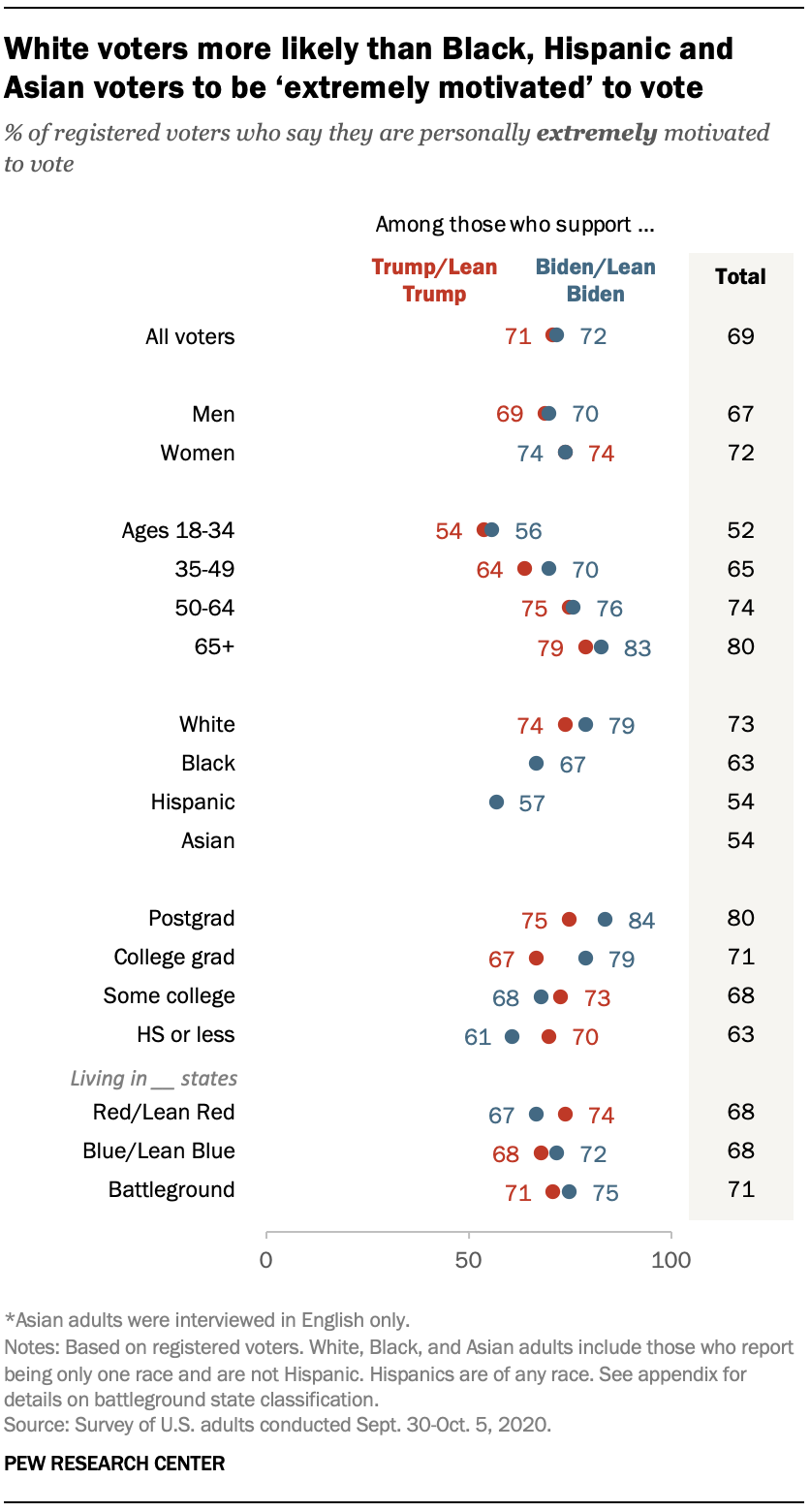 However, as in past elections, there are demographic differences in the shares expressing strong interest in voting. To some extent, these differences are seen in both electoral coalitions.

About three-quarters of White voters (73%) say they are extremely motivated to vote, compared with 63% of Black voters and 54% of both Hispanic voters and Asian American voters (54%).

These racial and ethnic differences are seen among Biden supporters: While 79% of White Biden supporters say they are extremely motivated to vote, smaller majorities of Black (67%) and Hispanic (57%) voters who back Biden say the same.

Among voters overall, those with higher levels of formal education are more likely than those with less education to say they have a strong desire to vote. But these differences are much more pronounced among Biden than Trump supporters. For example, there is a 23 percentage point gap in the shares of Biden supporters with postgraduate degrees (84%) and those with no more than a high school education (61%) who say they are extremely motivated to vote. Among Trump supporters, there is just a 5-point difference between postgraduates and those with more than a high school degree.

Trump and Biden supporters differ on how they plan to vote 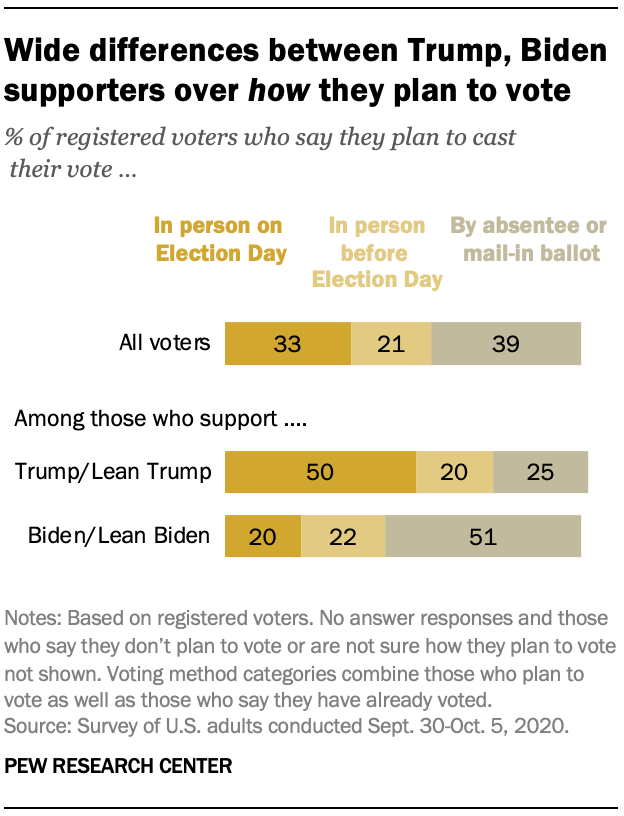 Among all registered voters, 6% say that this year is the first election year in which they are voting. 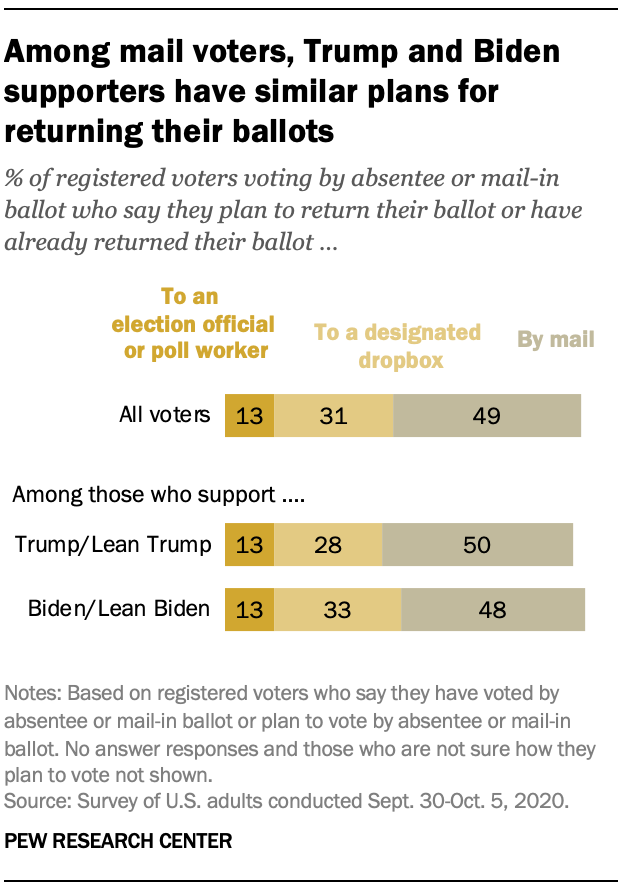 Despite ongoing concerns about the U.S. Postal Service’s ability to deliver ballots in a timely manner this fall, nearly half of those voting by mail or casting an absentee ballot (49%) say they intend to return their ballots by mail or have already returned their ballot by mailing it in. 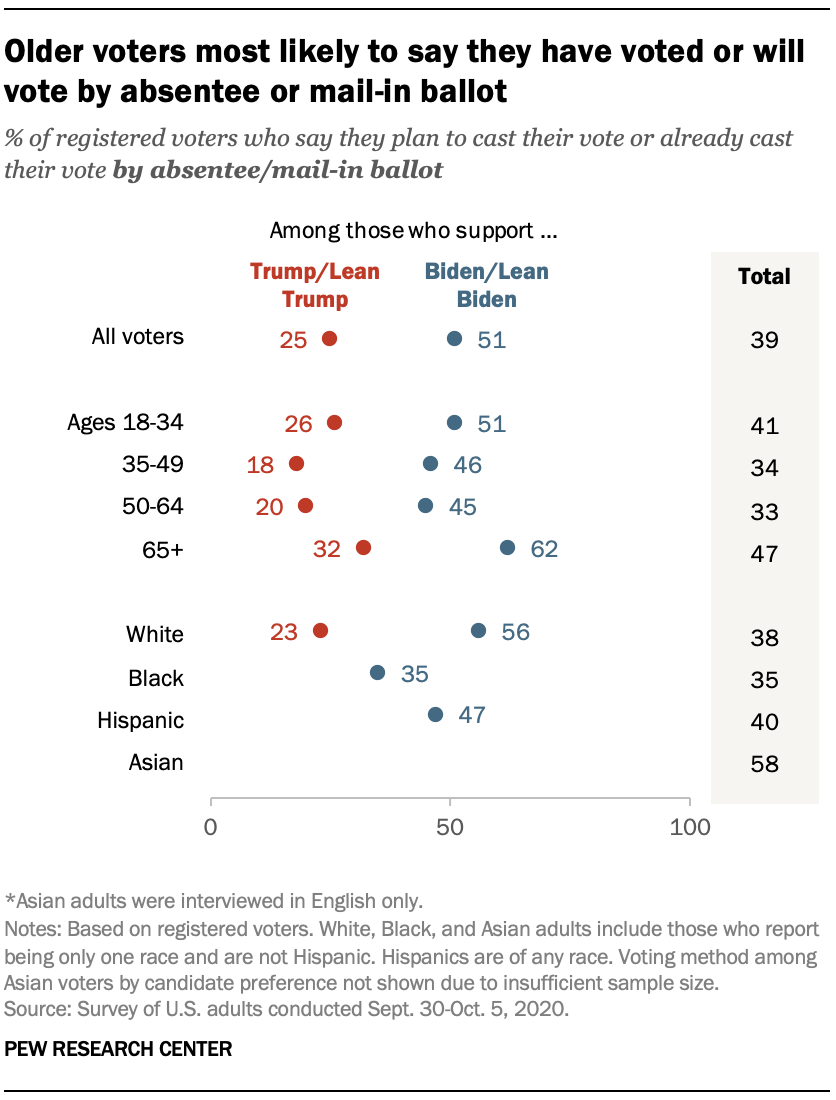 Voters age 65 and older are more likely than those in other age groups to say they have or will cast their vote by absentee or mail-in ballot, with 47% of those 65 and older saying this. That compares with 41% of younger voters (those ages 18 to 34) and about a third of those ages 35 to 64.

Across all age categories, Biden supporters are more likely than Trump supporters to say they have voted or will vote by absentee or mail-in ballot.

These differences can be partly explained by the fact that Black voters are more likely to live in states with stricter requirements for voting by mail. However, differences persist even after accounting for the geographic distribution of voters.

Next: 5. Views of the state of the nation and the U.S. economy
← Prev Page
Page1Page2Page3Page4You are reading page5Page6Page7Page8Page9
Next Page →

Amid Campaign Turmoil, Biden Holds Wide Leads on Coronavirus, Unifying the Country 1. The Trump-Biden presidential contest 2. Voters’ feelings about the election and possible outcomes 3. Perceptions of Trump and Biden
4. Voter engagement and interest, voting by mail and in person
Trump and Biden supporters differ on how they plan to vote
5. Views of the state of the nation and the U.S. economy Acknowledgments Appendix Methodology