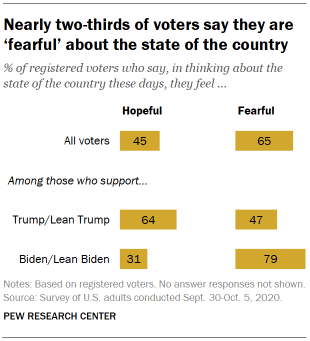 Voters who support or lean toward Joe Biden are especially likely to say they feel fearful thinking about the state of the country. Nearly eight-in-ten Biden supporters (79%) say this, compared with about half of Donald Trump supporters (47%).

And Trump supporters are about twice as likely as Biden supporters to say they feel hopeful about the state of the country (64% vs. 31%).

Public’s views of economy turn more positive, with most of the increase among Republicans 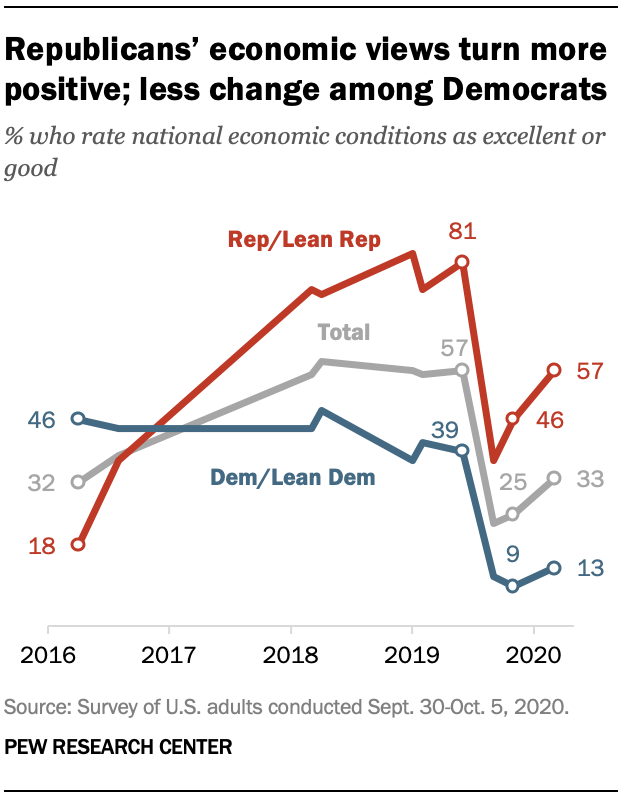 Among the public overall, views of the economy have become somewhat more positive since the first months of the COVID-19 pandemic. A third of Americans now say that national economic conditions are excellent or good, up from 25% in June and 23% in April.

Most of the increase in positive economic views has come among Republicans and Republican-leaning independents. The share of Republicans who say the economy is excellent or good has increased 11 percentage points since June and 20 points since April.

Democrats’ views are little changed over this period. Currently, 13% of Democrats and Democratic leaners say economic conditions are excellent or good, up slightly from 9% in June.

CORRECTION (October 9, 2020): In the chart “Nearly two-thirds of voters say they are ‘fearful’ about the state of the country” the percent of “Trump/Lean Trump” supporters who are fearful has been updated to 47%. The percent of Biden/Lean Biden supporters who are hopeful has been updated to 31%. The text was also updated to reflect this. These changes did not affect the report’s substantive findings.

Amid Campaign Turmoil, Biden Holds Wide Leads on Coronavirus, Unifying the Country 1. The Trump-Biden presidential contest 2. Voters’ feelings about the election and possible outcomes 3. Perceptions of Trump and Biden 4. Voter engagement and interest, voting by mail and in person
5. Views of the state of the nation and the U.S. economy
Public’s views of economy turn more positive, with most of the increase among Republicans
Acknowledgments Appendix Methodology