Overall, voters feel colder about Donald Trump than they do about Joe Biden. When asked to rate the two candidates on a “feeling thermometer” where 0 is the coldest rating and 100 is the warmest rating, 51% of registered voters give Trump a “very cold” rating of less than 25 (including 40% who give him a zero – the lowest possible rating) while 38% give Biden a “very cold” rating (including 25% who give him a zero rating). There is a more modest gap in the shares of expressing “warm” or “very warm” feelings: 43% give Biden a rating over 50, compared with 38% who give Trump a warm rating – with about one-in-three voters giving each of the candidates intensely positive ratings (a rating of more than 75 on the 100-point scale).

When it comes to negative views of the other party’s candidate, nine-in-ten Biden supporters give Trump a very cold rating (including fully 73% who give him the lowest possible rating – zero). By comparison, 79% of Trump voters give Biden a very cold rating (with 55% rating him at 0).

Among the small share of voters who are not supporting either major party candidate (6%), clear majorities give both Trump and Biden cold ratings.

Overall, voters give Biden an average rating of 45 on the 100-point scale compared with Trump’s score of 39. Across most demographic groups, Biden receives warmer ratings than Trump.

Among registered voters, Trump and Biden are viewed about equally on average by men (who give both candidates an average rating of 42), but women give Trump (36) substantially lower ratings than Biden (48). In 2016, men gave Clinton a significantly lower rating than Trump (34 to 41). Women’s ratings of the two major party candidates are little different from 2016.

Older voters are much more likely to give Trump a warmer rating than younger voters. Generation Z (33) and Millennials (30) give Trump his lowest ratings among the generations, while the ratings of oldest voters – members of the Silent Generation – are warmest (49). Biden’s average rating is more consistent across generations – he receives comparable ratings from Gen Z (44), Millennials (45), Gen X (45) and Baby Boomers (45). Biden’s rating is slightly lower among Silents (41) than among younger generations of voters.

Educational divides in ratings of the two candidates are widest among those with a college degree or more. These voters give Biden an average rating 23 percentage points higher than Trump (52 vs. 29). Voters with some college education give both candidates about an equal rating, while those with a high school degree or less education are somewhat warmer toward Trump (48) than Biden (41). 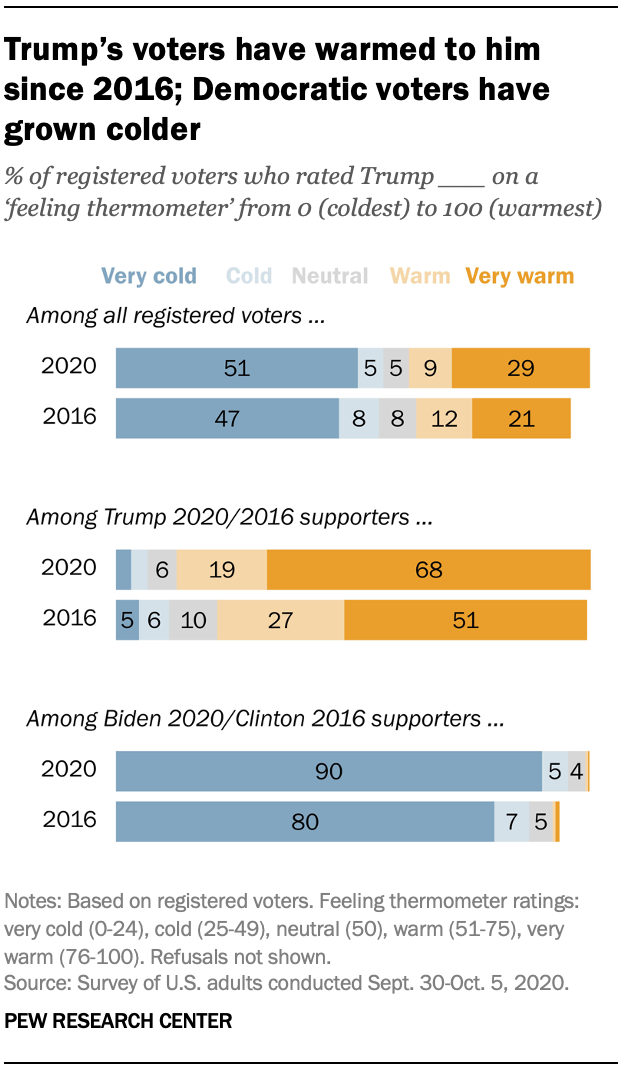 White voters give Trump a warmer average rating than Biden (45 for Trump and 39 for Biden), while Biden is viewed more warmly than Trump among Hispanic voters (54 for Biden, 32 Trump), Asian American voters (55 Biden, 24 Trump) and particularly Black voters (Biden garners an average rating of 72 among Black voters, while Trump’s average rating among this group is just 12).

Compared with a similar point in the 2016 campaign, voters’ views of Trump are somewhat warmer. Much of this movement occurred after he won the 2016 general election and Republicans – many of whom who were initially somewhat skeptical of their party’s nominee – warmed to him.

At this point in the 2016 campaign, about half (51%) of those who said they were planning on voting for Trump gave him a very warm rating. Today about two-thirds of those who intend to vote for Trump (68%) rate him very warmly. 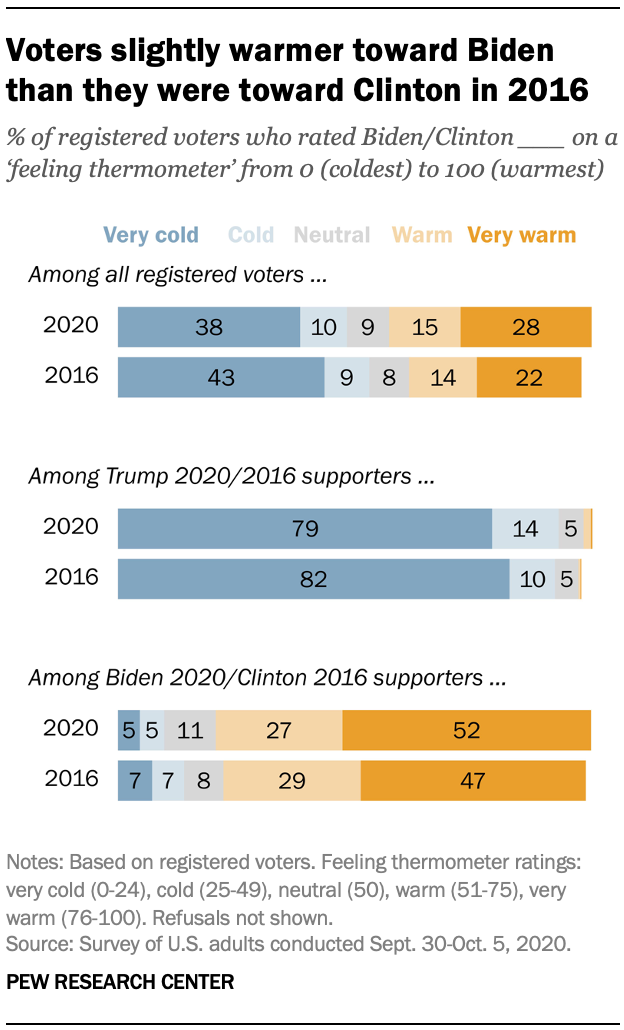 Biden receives slightly warmer ratings from voters this year than did Clinton at a similar point in 2016. Today, 38% rate Biden very cold compared with 43% who gave Clinton a very cold rating four years ago, and a slightly larger share of voters give him a very warm rating (28% vs. 22% for Clinton).

Among Trump supporters in 2016 and those today, there are only minor differences in ratings of his Democratic opponents: 82% gave Clinton a “very cold” rating in 2016, and roughly as many (79%) give Biden a very cold rating today.

Clinton supporters were only slightly less positive toward their candidate in 2016 than Biden voters are today (47% of her supporters gave Clinton a very warm rating in 2016, and 52% of Biden voters rate him very warmly today).

Overall, voters express higher levels of confidence in Biden than Trump across several domains, including handling the health impact of the coronavirus outbreak, making good foreign policy decisions and selecting good Supreme Court nominees. At the same time, roughly equal shares of voters express confidence in Trump and Biden on the economy, though more say they are very confident in Trump in this area. 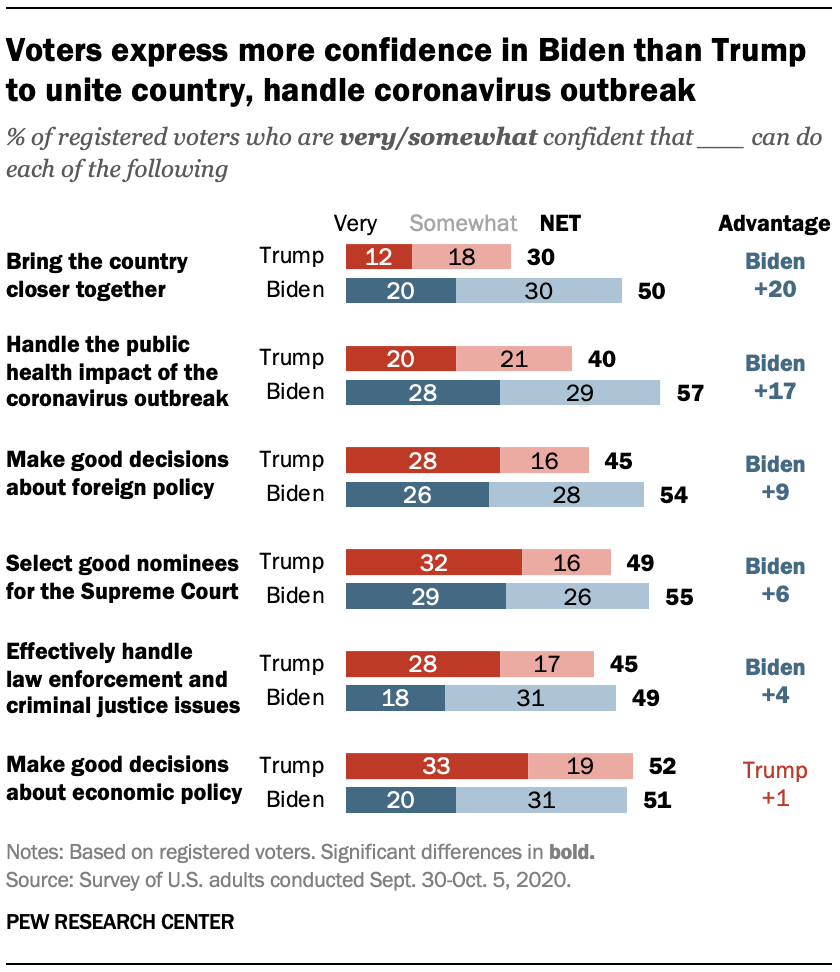 Majorities of registered voters say they are very or somewhat confident in Biden to handle the public health impact of the coronavirus outbreak (57%), select good nominees for the Supreme Court (55%) and make good decisions about foreign policy (54%). By comparison, half or fewer voters say the same for Trump in these areas.

Just three-in-ten voters say they are at least somewhat confident that Trump can bring the country closer together. By comparison, half of voters say they are confident in Biden to do this. A similarly large gap exists between the shares of voters who are at least somewhat confident in Biden to handle the public health impact of the coronavirus outbreak (57%) and those who say the same about Trump (40%). Note: The survey was in the field when Trump announced on Twitter, early on the morning of Oct. 2, that he and first lady Melania Trump had contracted COVID-19. There are no significant differences in confidence in the two candidates to handle the impact of the coronavirus before and after his announcement. 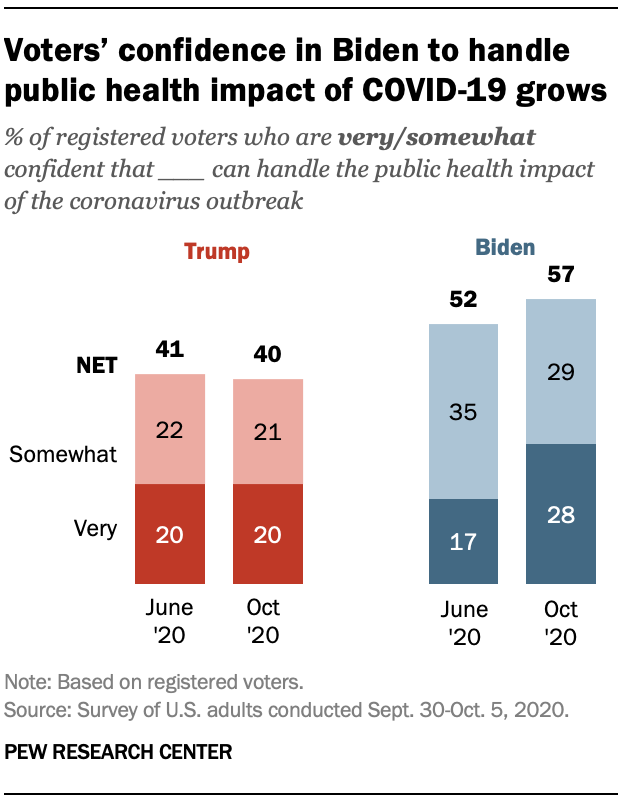 Today, similar shares of voters express confidence in Trump to handle the economy (51% in June, 52% today). At the same time, confidence in Biden to make good decisions about economic policy has risen modestly (48% then vs. 51% today).

Biden supporters have grown much more confident in Biden across all issue areas. The share of Biden supporters who are very or somewhat confident that Biden can bring the country closer together has risen 11 percentage points since June, from 76% then to 87% today. Similarly, there are 9-point increases among Biden supporters in the shares expressing confidence that he can make good decisions about economic policy, handle the public health impact of the coronavirus outbreak and effectively handle law enforcement and criminal justice issues.

Trump supporters’ confidence in their candidate is little changed over this period, although more now say they are very confident that Trump can effectively handle law enforcement and criminal justice issues than they were in June. 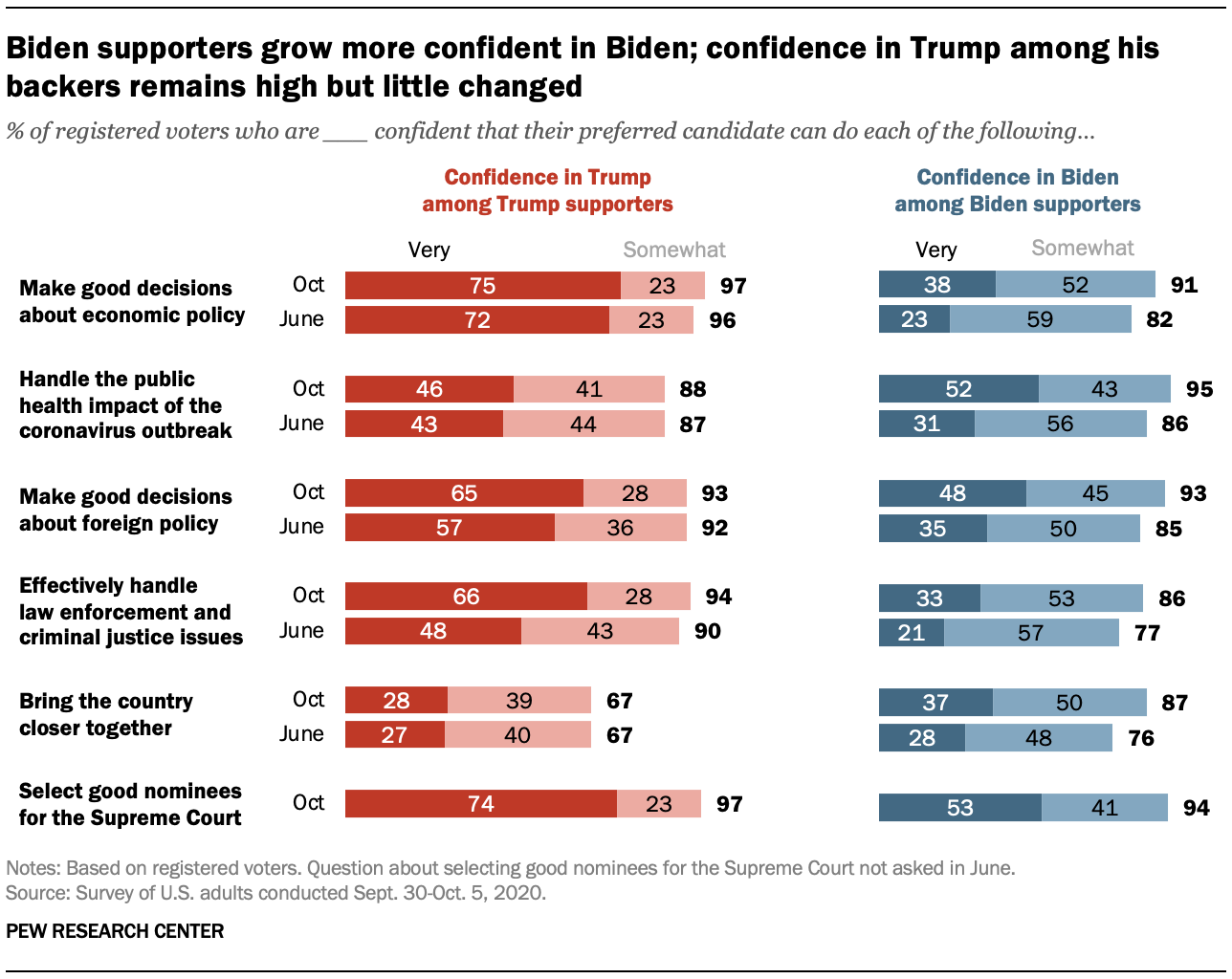 Next: 4. Voter engagement and interest, voting by mail and in person
← Prev Page
Page1Page2Page3You are reading page4Page5Page6Page7Page8Page9
Next Page →

Amid Campaign Turmoil, Biden Holds Wide Leads on Coronavirus, Unifying the Country 1. The Trump-Biden presidential contest 2. Voters’ feelings about the election and possible outcomes
3. Perceptions of Trump and Biden
Biden seen as better able to handle COVID-19 outbreak than Trump
4. Voter engagement and interest, voting by mail and in person 5. Views of the state of the nation and the U.S. economy Acknowledgments Appendix Methodology