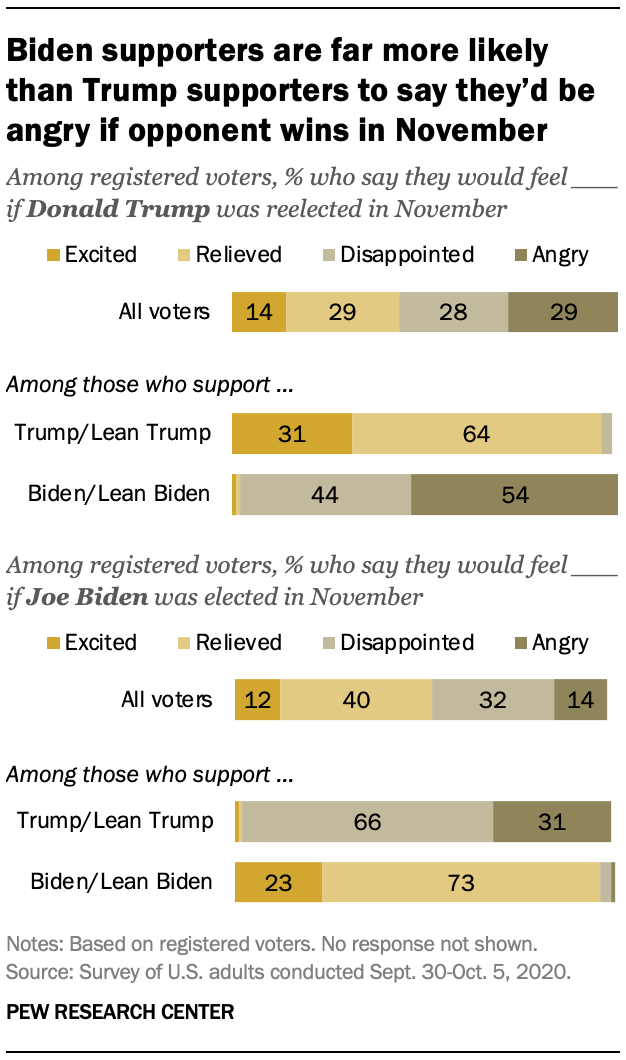 About half of voters (53%) say they would feel either excitement or relief if Biden won the 2020 presidential election, compared with 46% who say they would have negative reactions – disappointment or anger – toward his possible victory.

By contrast, more voters say their reaction in response to Trump winning the election would be negative (57%) than positive (42%). About twice as many voters say they would be angry if Trump wins reelection (29%) than if Biden was elected president (14%).

Supporters of both candidates are somewhat less likely to say they would be angry in the event of the opposing candidate’s election than they were in August (61% of Biden supporters then, 54% now; 37% of Trump supporters then, 31% now). 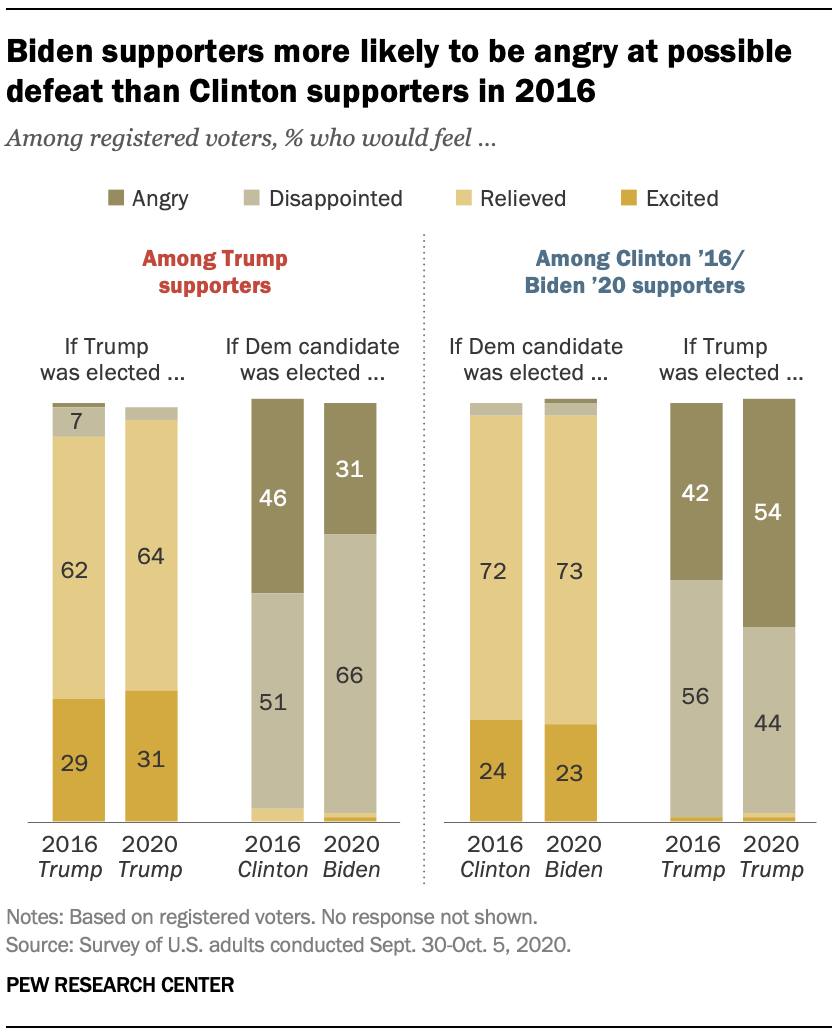 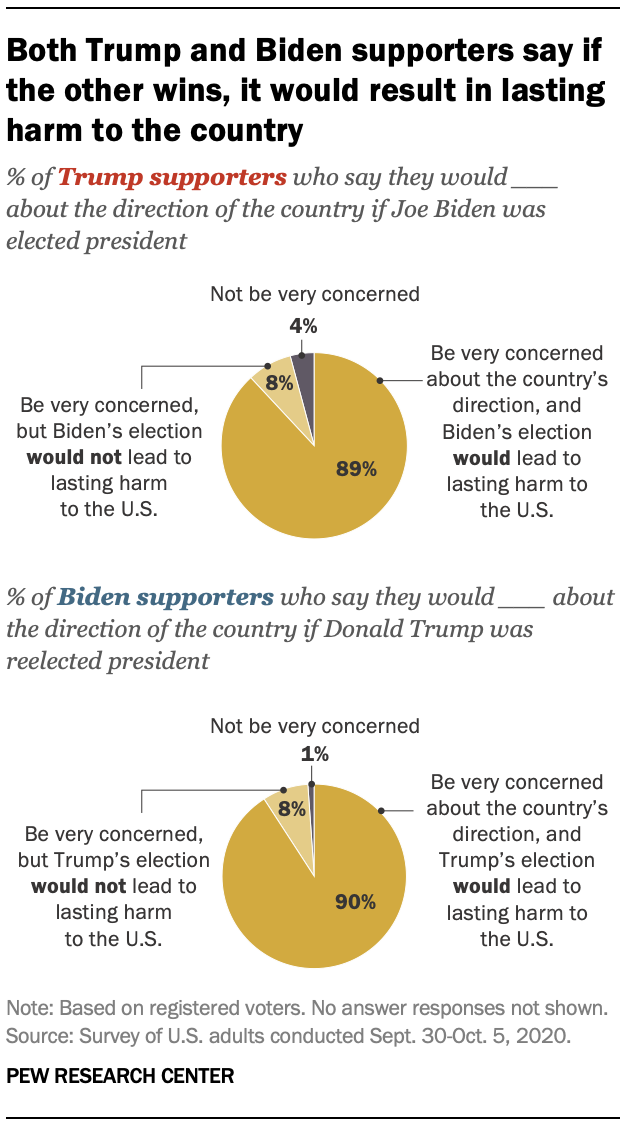 Overwhelming majorities of both Biden and Trump supporters say that if the other candidate wins in November they would not only be very concerned about the country’s direction, but that this would lead to lasting harm to the nation.

Trump and Biden supporters overwhelmingly want their candidate, if elected, to focus on concerns of all Americans 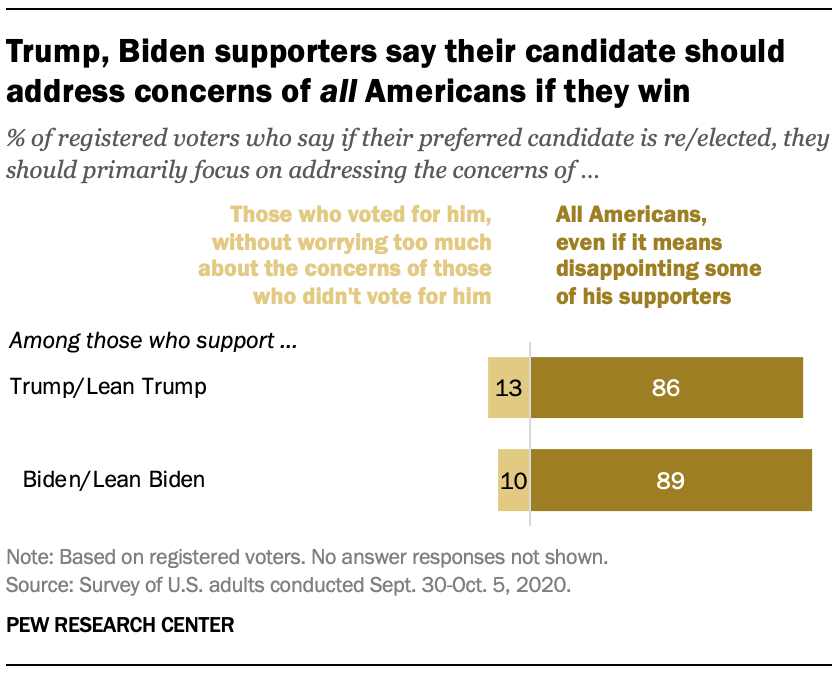 Majorities of both Trump (86%) and Biden (89%) supporters say that their preferred candidate, if elected, should focus on addressing the needs of all Americans, “even if it means disappointing some of his supporters.” Only about one-in-ten in each camp (13% of Trump and 10% of Biden supporters) say their candidate should focus on the concerns of “those who voted for him, without worrying too much about the concerns of those who didn’t vote for him.”

Although there are no major differences across demographic groups who express this viewpoint, younger supporters of both Trump and Biden are slightly less likely to say that their candidate should address the concerns of all Americans than older supporters. 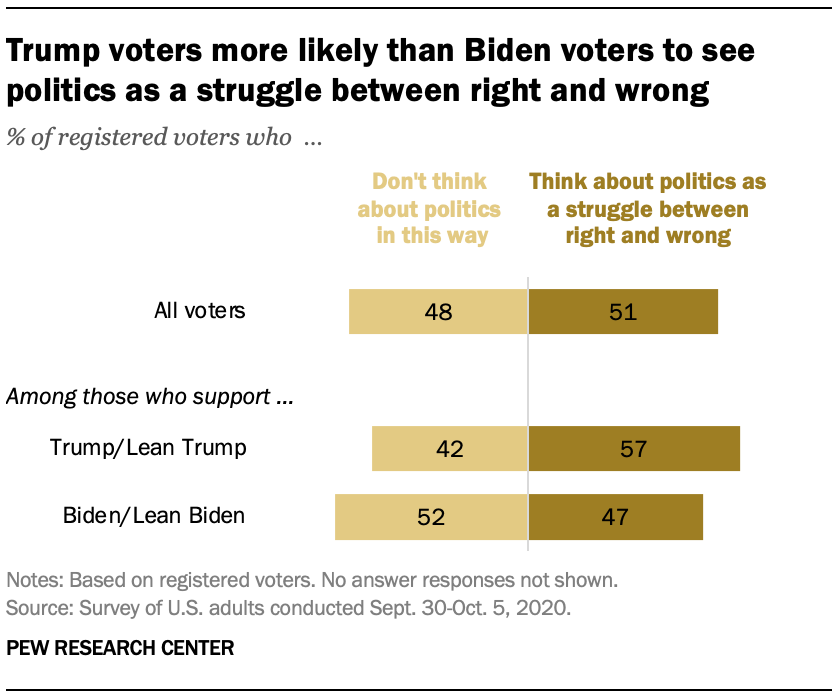 Next: 3. Perceptions of Trump and Biden
← Prev Page
Page1Page2You are reading page3Page4Page5Page6Page7Page8Page9
Next Page →

Sharp Divisions on Vote Counts, as Biden Gets High Marks for His Post-Election Conduct
Election 2020: Voters Are Highly Engaged, but Nearly Half Expect To Have Difficulties Voting
Voters Say Those on the Other Side 'Don't Get' Them. Here's What They Want Them to Know.
Large Shares of Voters Plan To Vote a Straight Party Ticket for President, Senate and House
Most Americans Say Trump Was Too Slow in Initial Response to Coronavirus Threat