With less than three months until the 2020 presidential election, a larger share of registered voters say they would support Joe Biden (53%) over Donald Trump (45%) if the election were held today. But when it comes to how strongly voters back their chosen candidate, 66% of Trump supporters say they support him strongly, while just 46% of Biden supporters say the same. 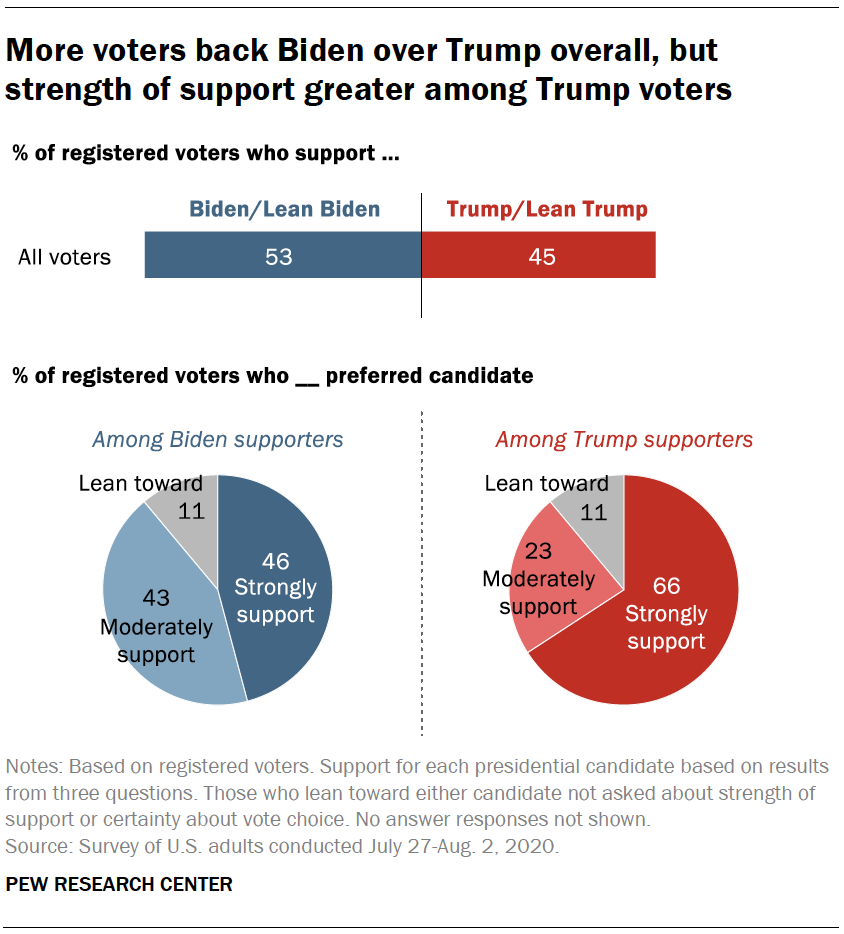 Nearly a quarter of voters who back Trump say they support him moderately (23%). Another 11% say they lean toward Trump (voters who declined to express a preference between the two major candidates in an initial question were asked which candidate they lean toward).

Support for Biden is more tepid; 43% of registered voters who say they would vote for Biden if the presidential election were held today say they moderately support him. About one-in-ten (11%) lean toward Biden.

The overwhelming majority of registered voters who currently support Biden and Trump (excluding those who lean toward either candidate) are locked into their choices. More than eight-in-ten Biden voters (84%) and Trump voters (85%) say they are certain to support their preferred candidate in the upcoming presidential election. Only about 5% of voters who support either of the two candidates say there is a chance they will change their mind (5% of Biden supporters, 4% of Trump voters). 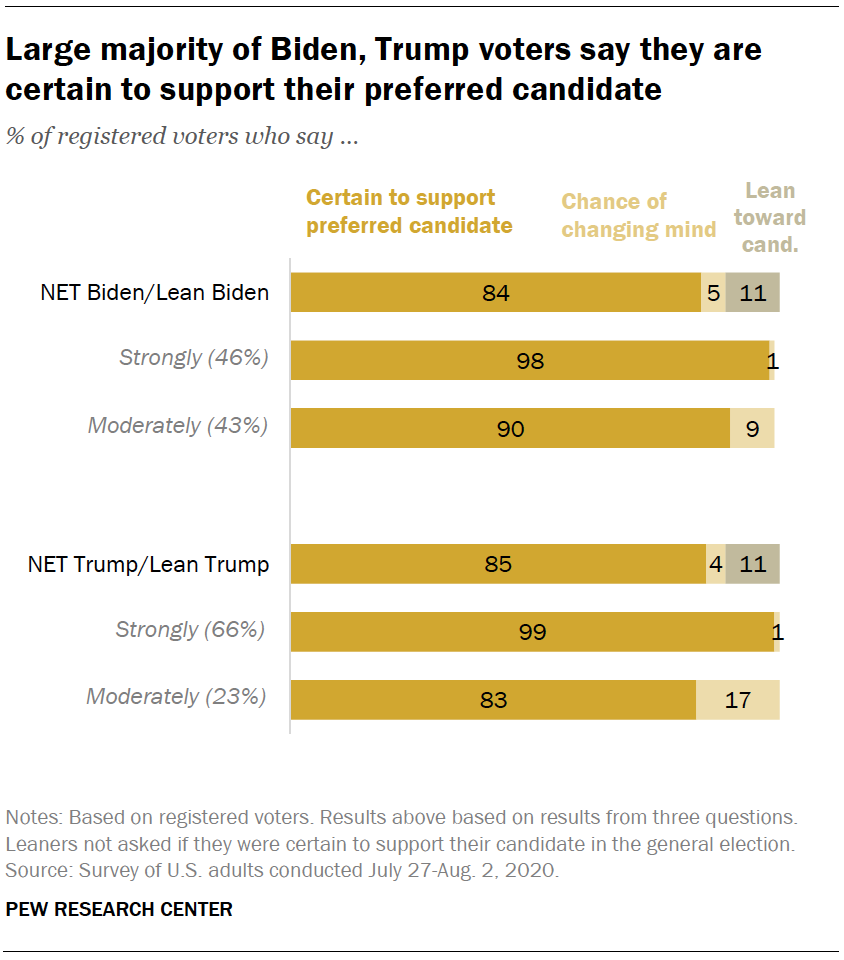 However, while a much larger share of Biden supporters support him moderately compared with Trump supporters (43% vs. 23%), they are more certain in their choice than are those who say they support Trump only moderately. 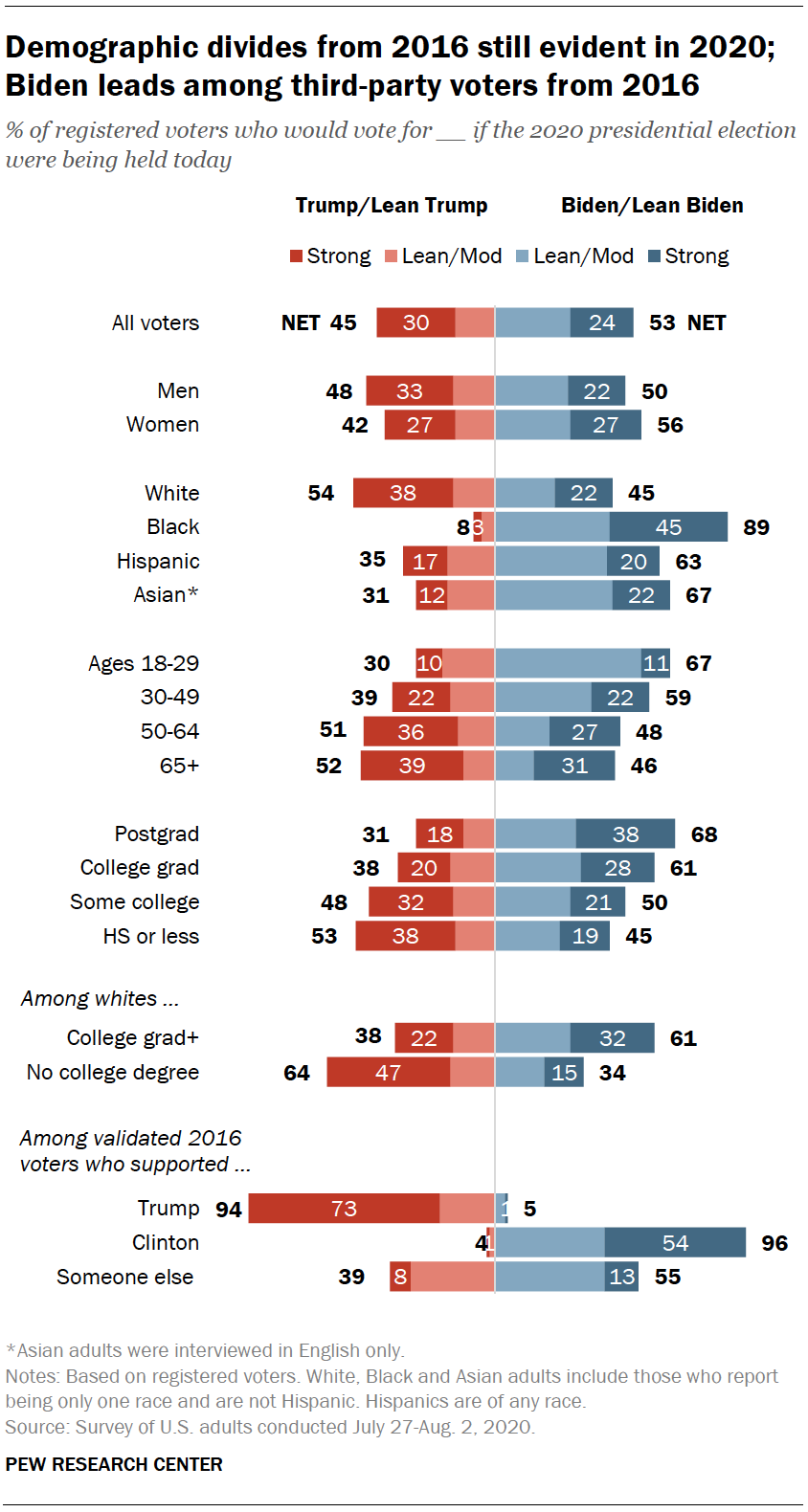 Many of the demographic divides that were evident in the 2016 presidential contest are just as wide today as they were four years ago – especially by race, education and gender. (See detailed tables for further information on voter preferences.)

While Biden enjoys more support among women, Black, Hispanic, and Asian American voters, Trump fares better among older and less-educated voters. These divisions were evident earlier this summer, as well as four years ago.

And while gaps in support among these groups are not new, many of the differences in strength of support are striking. For example, while a 54% majority of white voters favor Trump, 38% support him strongly. Fewer white voters support Biden (45%), including just 22% who back him strongly.

Today, substantial majorities of registered voters who cast ballots for Trump or Clinton in 2016 are largely sticking to their same party’s candidate. Among those voters who were matched to a voter file and reported supporting Trump in 2016, 94% say they will vote for Trump again this November; about 5% say they will support Biden.

The pattern is largely the same among 2016 Clinton voters: 96% say they will cast a ballot for Biden this fall, while just 4% say they will support Trump.

Among those voters who reported casting a ballot for someone other than Trump or Clinton in 2016, including Gary Johnson and Jill Stein, more say they would support Biden over Trump (55% vs. 39%) if the election were held today. Relatively small shares report either candidate strongly (8% say they support Trump strongly vs. 13% who say they support Biden strongly).

Registered voters divided on which candidate will win

Overall, registered voters are divided over who they think will win the 2020 November election: While 50% of voters believe that Trump will win the presidential election, 48% predict a victory for Biden. 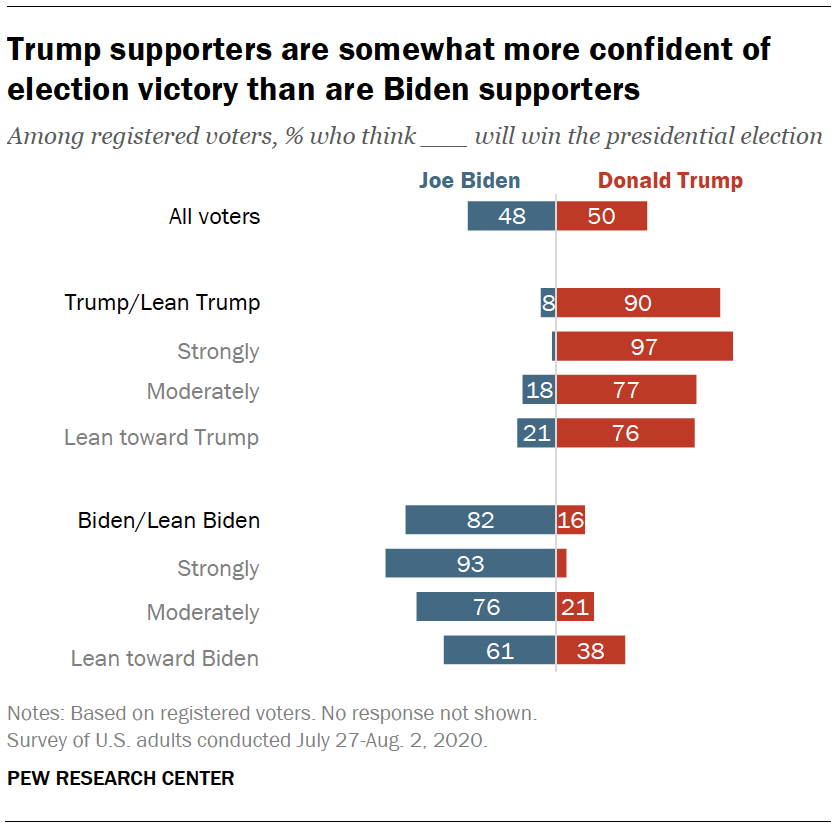 And although voters’ predictions for who will win the presidential election largely align with their candidate preference, voters who support Trump or lean toward voting for him are slightly more likely than Biden supporters to say that their candidate will win (90% vs. 82%).

Throughout the 2016 presidential campaign, majorities of voters consistently expected a Hillary Clinton victory. In August of 2016, 55% said Clinton would win, compared with 42% who expected Trump to win.

By contrast, roughly the same share of Biden supporters are confident of victory today (82%) as Clinton supporters four years ago (85%).

Today, voters who are more certain of their choice in candidate are more likely to expect that their candidate will win the 2020 election. Nearly all strong Trump supporters (97%) expect him to win, compared with 77% of his more moderate supporters. Similarly, among Biden supporters, those who support Biden strongly (93%) are more likely than those who support him moderately (76%) to expect him to win the November election.

How Trump and Biden supporters would react to victory and defeat 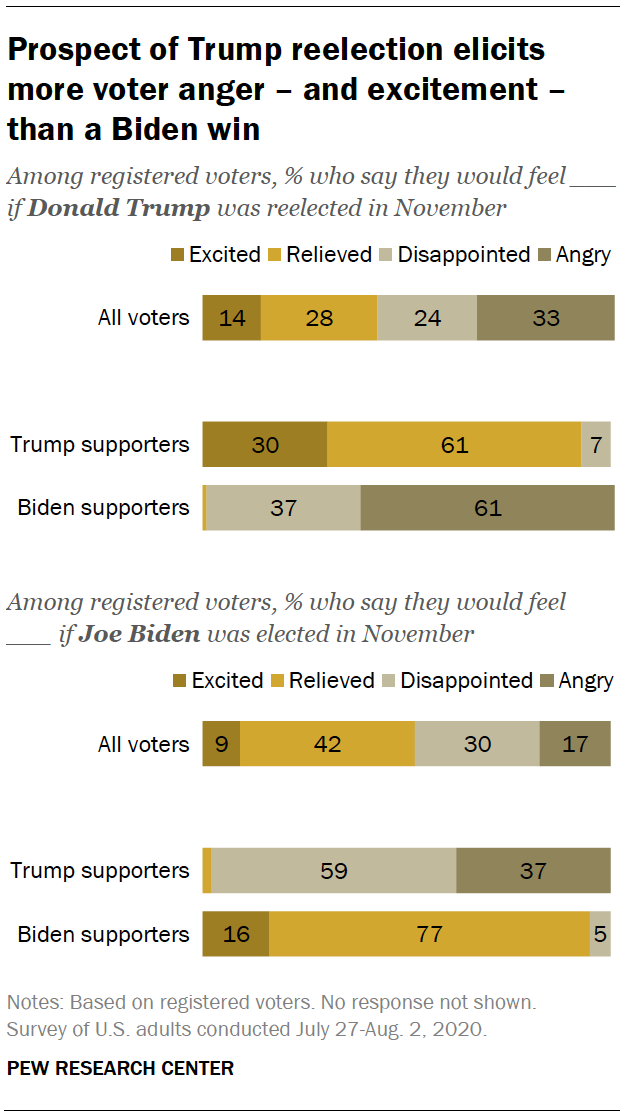 When asked about their reactions to the outcome of the November 2020 election, voters say they would have more positive reactions to Biden winning the election than to Trump being reelected president. And voters’ reactions to Trump’s possible reelection are more intense – both positively and negatively – than to a Biden victory.

Among voters who say they would react positively to a Biden victory, far more would be relieved (42%) than excited (9%). Among those who expect to react negatively, more say they would be disappointed (30%) than angry (17%).

Yet somewhat more voters also say they would be excited by a Trump victory than a Biden victory.

By contrast, Biden supporters are more likely to express relief about the possibility of their candidate winning. About eight-in-ten Biden supporters (77%) say they would be relieved if Biden were elected in 2020, compared with 61% of Trump supporters. 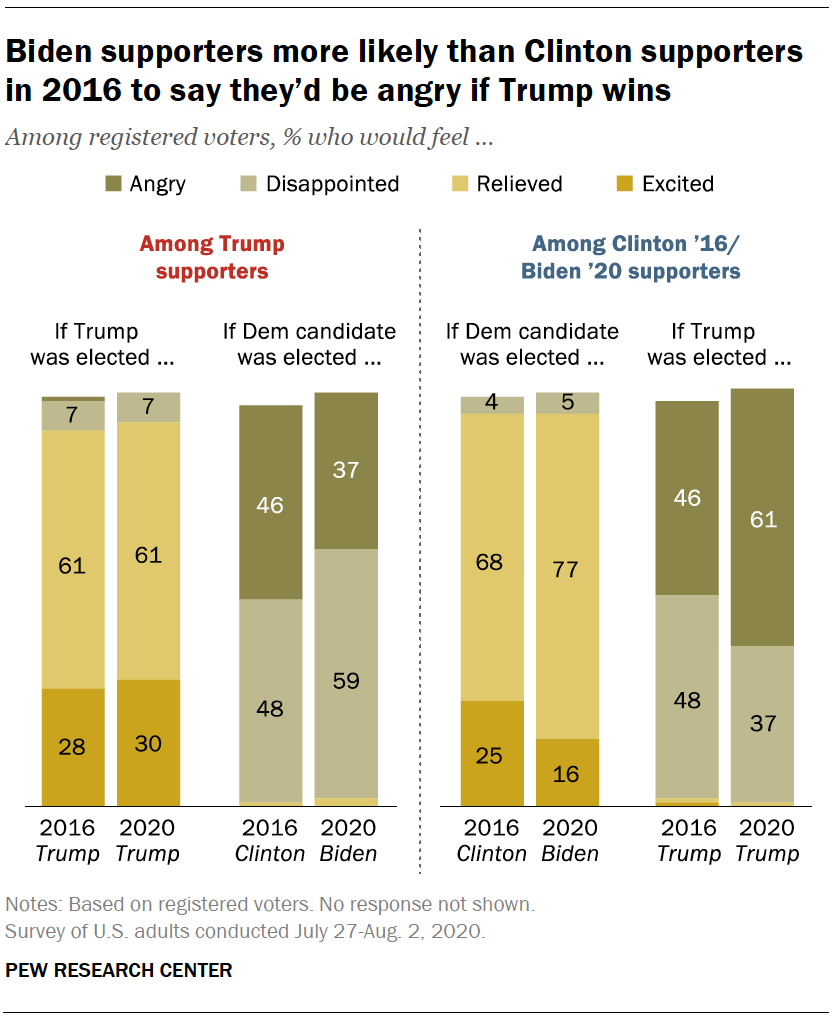 Among Trump supporters, the outlook toward a possible Trump victory is little different than it was in 2016. As was the case then, far more Trump supporters say they would be relieved (61%) than excited (30%) if Trump wins. However, when asked about their potential reaction to Biden winning the presidential election in 2020, a smaller share (37%) say they would be angry than the share who said they would react in this way (46%) in 2016 when asked about a possible Clinton victory.

Next: 2. Perceptions of Trump and Biden
← Prev Page
Page1You are reading page2Page3Page4Page5Page6Page7Page8
Next Page →

Election 2020: Voters Are Highly Engaged, but Nearly Half Expect To Have Difficulties Voting
1. The 2020 Trump-Biden matchup
Registered voters divided on which candidate will winHow Trump and Biden supporters would react to victory and defeat
2. Perceptions of Trump and Biden 3. Views of the 2020 campaign and voting in November 4. Important issues in the 2020 election Appendix: Validated vote measures Acknowledgments Methodology