The 2020 presidential campaign is attracting a high level of interest from voters. Three measures of voter attitudes and engagement are among the highest seen for presidential elections over the last few decades. 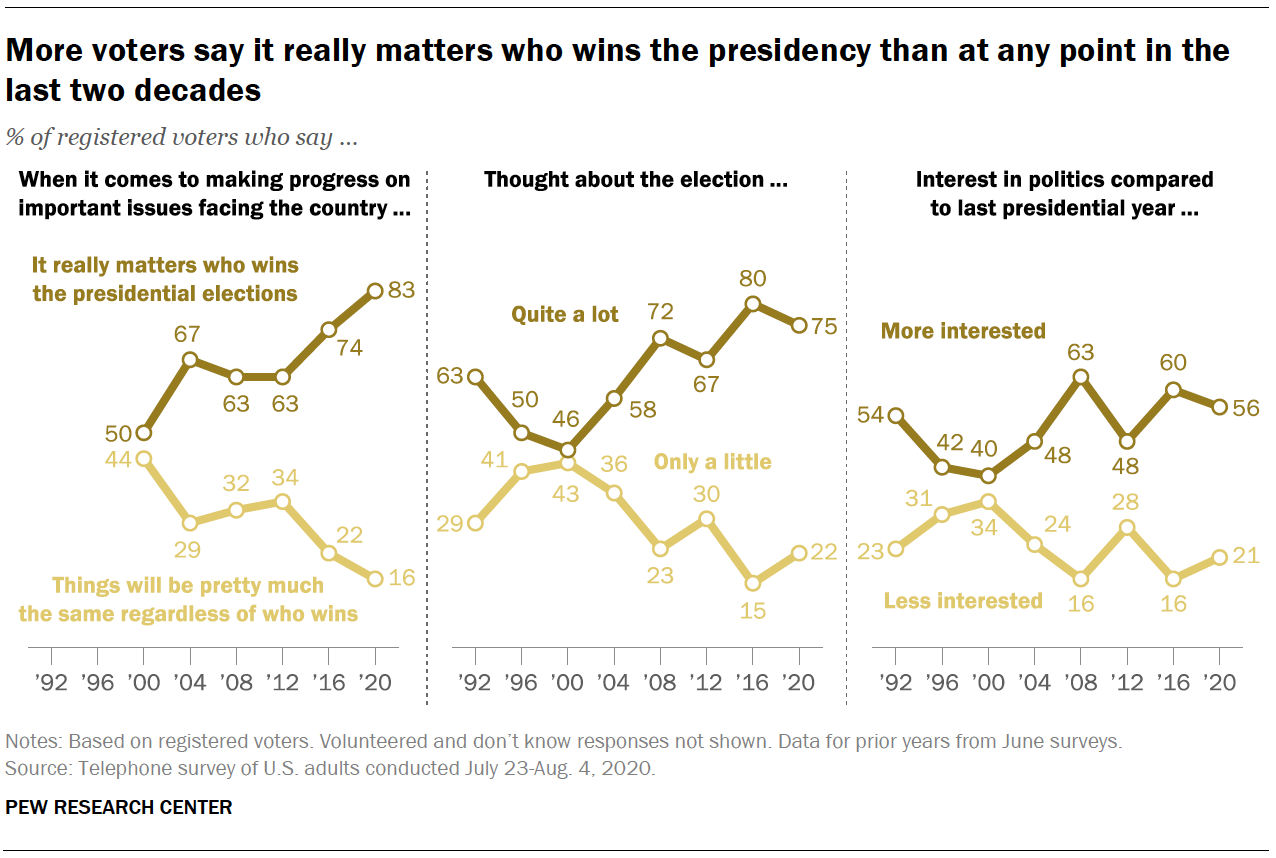 Republican (86%) and Democratic (85%) registered voters are about equally likely to say this year’s election outcome really matters – and record shares in both parties say this. There are also no significant differences in the shares of Republican and Democratic voters who say they have thought quite a lot about the election (77% and 78%, respectively) or say that they are more interested in politics than they were in 2016 (57% and 59%, respectively). 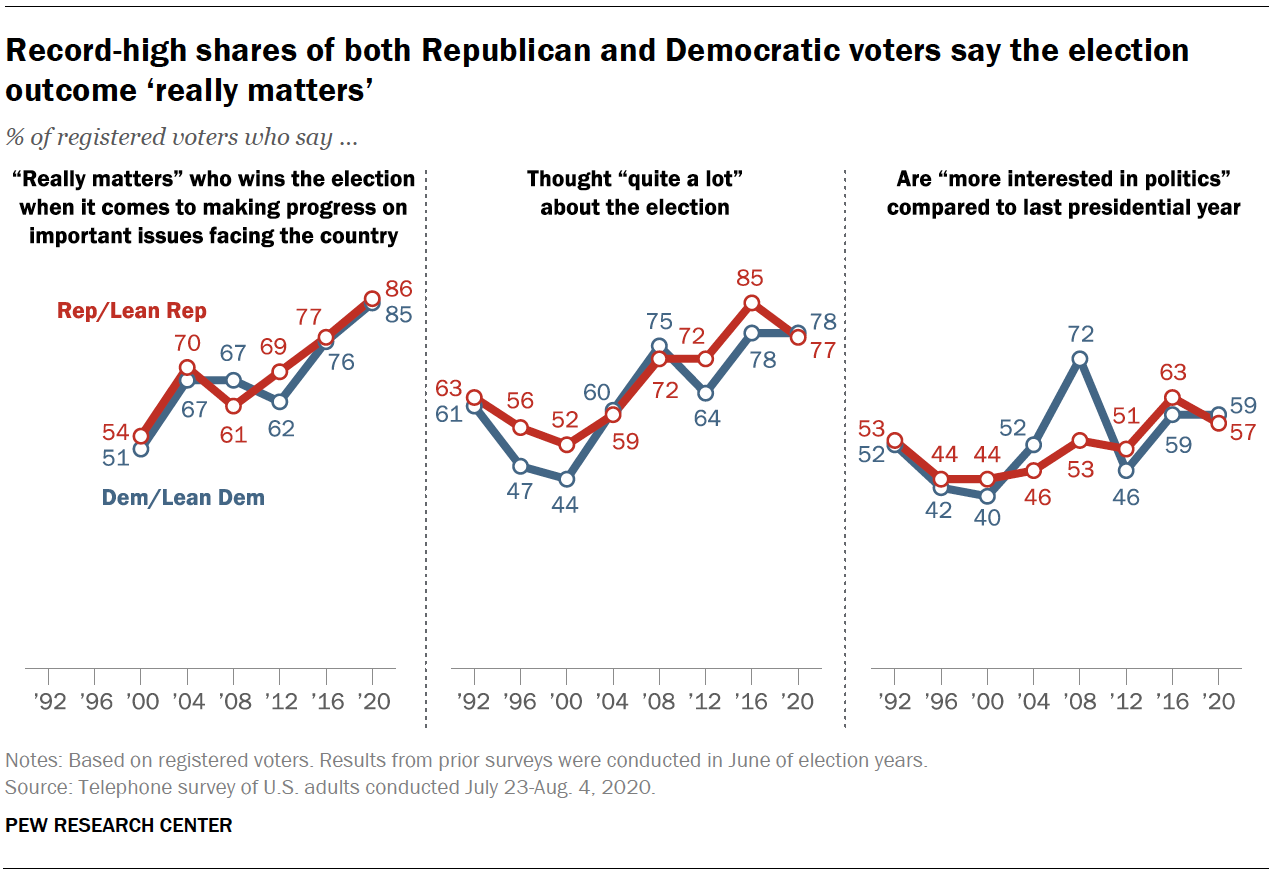 Most say 2020 campaign not focused on important policy debates

About half of registered voters say the presidential campaign has been interesting (48%), with roughly as many characterizing it as dull (45%). Voters are finding the 2020 campaign far less interesting than they found the 2016 race – three-quarters (77%) said the 2016 campaign was interesting, higher than for any prior election dating back to 1992. Still, the share of voters saying the campaign is interesting is higher than in the last several elections involving an incumbent president. 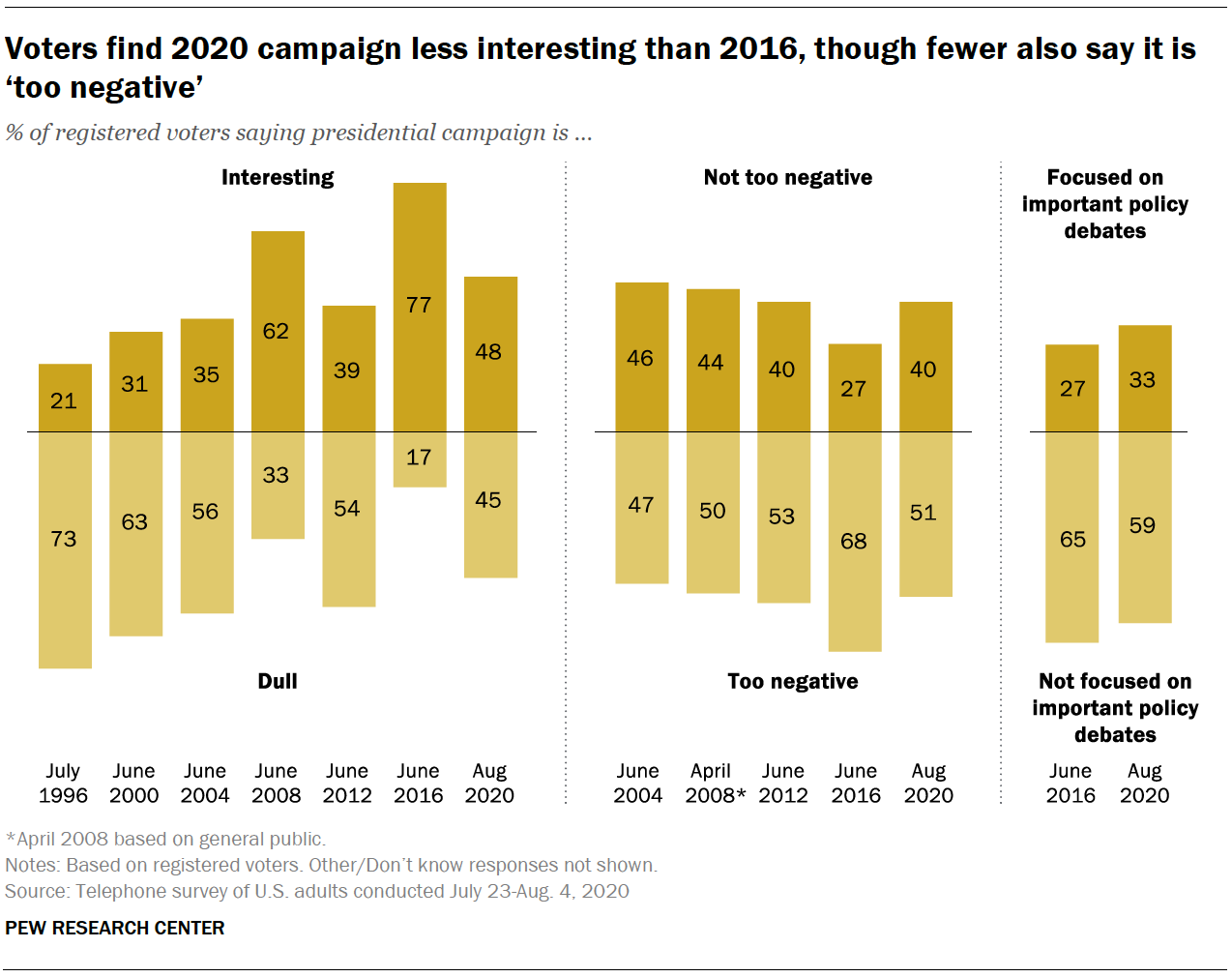 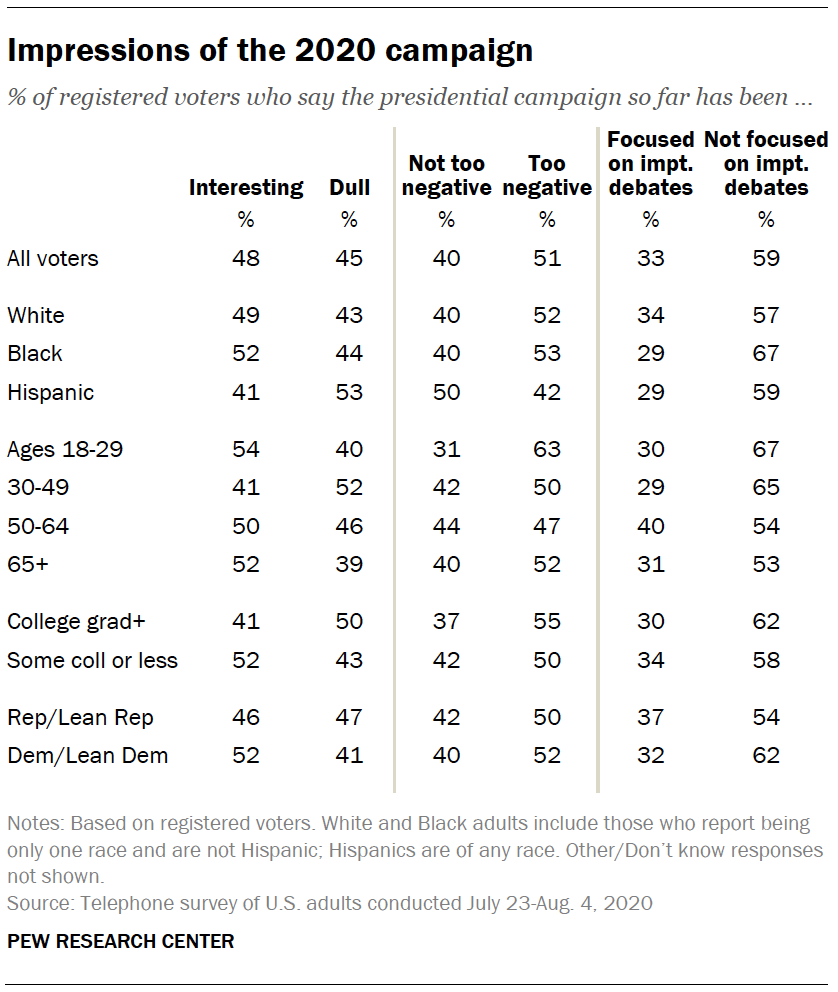 While demographic differences on these measures are relatively modest, there are some age and educational differences.

Voters without a college degree are more likely than those with one to say that the presidential campaign has been interesting (52% vs. 41%).

Trump, Biden supporters differ over whether they prefer to vote in person or by mail in November 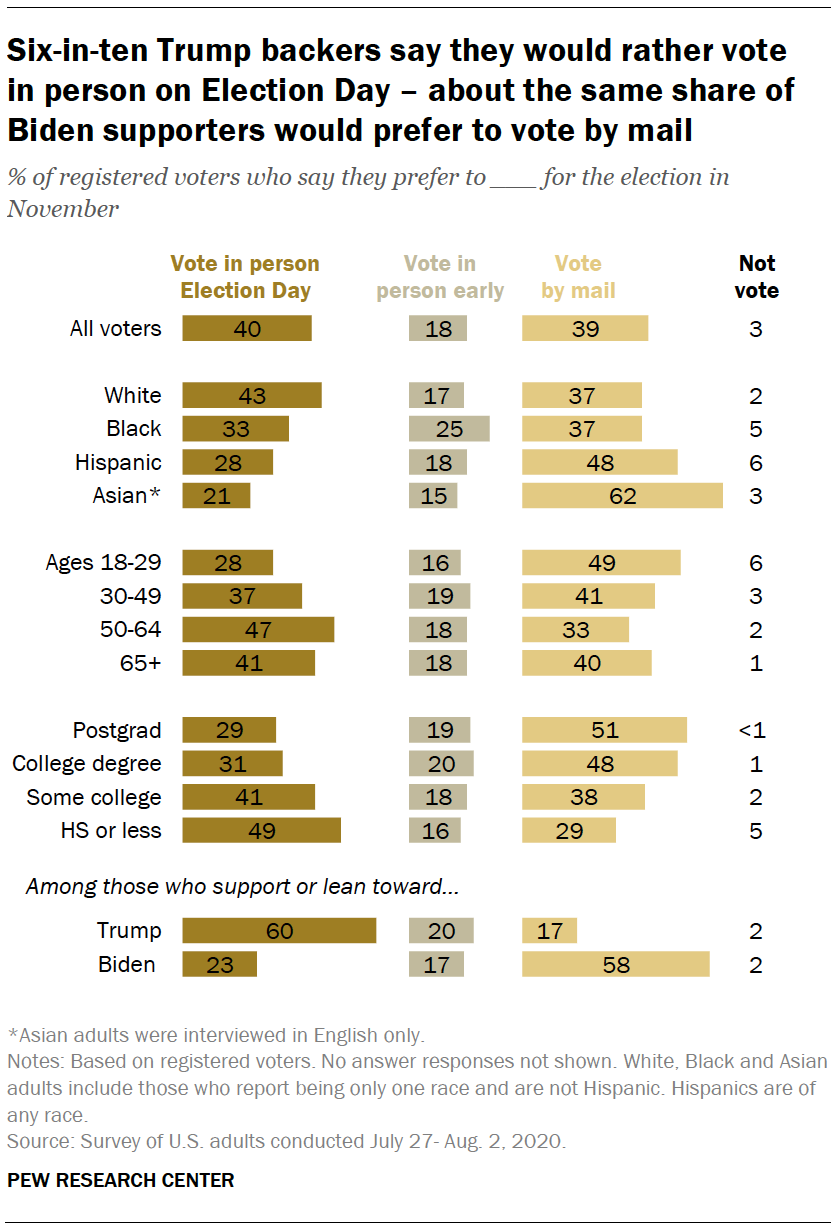 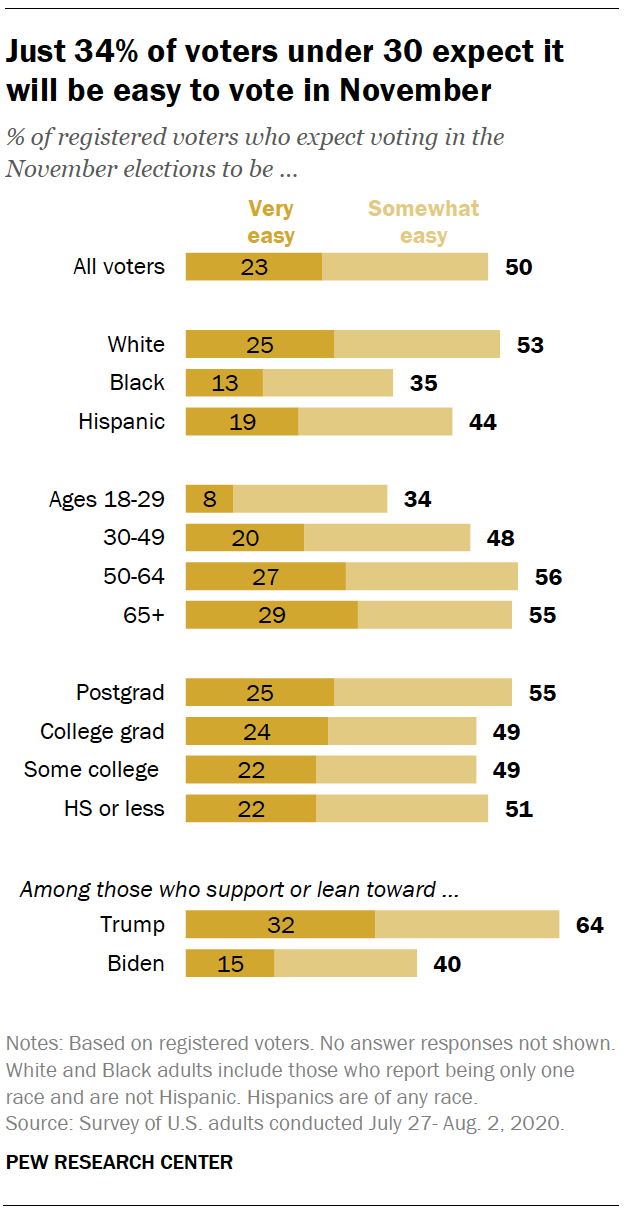 Overall, 50% of registered voters say that they expect voting in the November election will be at least somewhat easy, with 23% saying they think it will be very easy.

Trump supporters are much more likely than Biden backers to say that they expect voting in the November elections will be easy (64% of Trump voters say this, compared with 40% of Biden voters).

Overall views of how difficult or easy it will be to vote in November vary only modestly by education, with those with a postgraduate education more likely than others to say they expect voting to be easy in November.

Next: 4. Important issues in the 2020 election
← Prev Page
Page1Page2Page3You are reading page4Page5Page6Page7Page8
Next Page →

Election 2020: Voters Are Highly Engaged, but Nearly Half Expect To Have Difficulties Voting 1. The 2020 Trump-Biden matchup 2. Perceptions of Trump and Biden
3. Views of the 2020 campaign and voting in November
Most say 2020 campaign not focused on important policy debatesTrump, Biden supporters differ over whether they prefer to vote in person or by mail in NovemberBlack voters less likely than others to say voting in November will be ‘easy’
4. Important issues in the 2020 election Appendix: Validated vote measures Acknowledgments Methodology