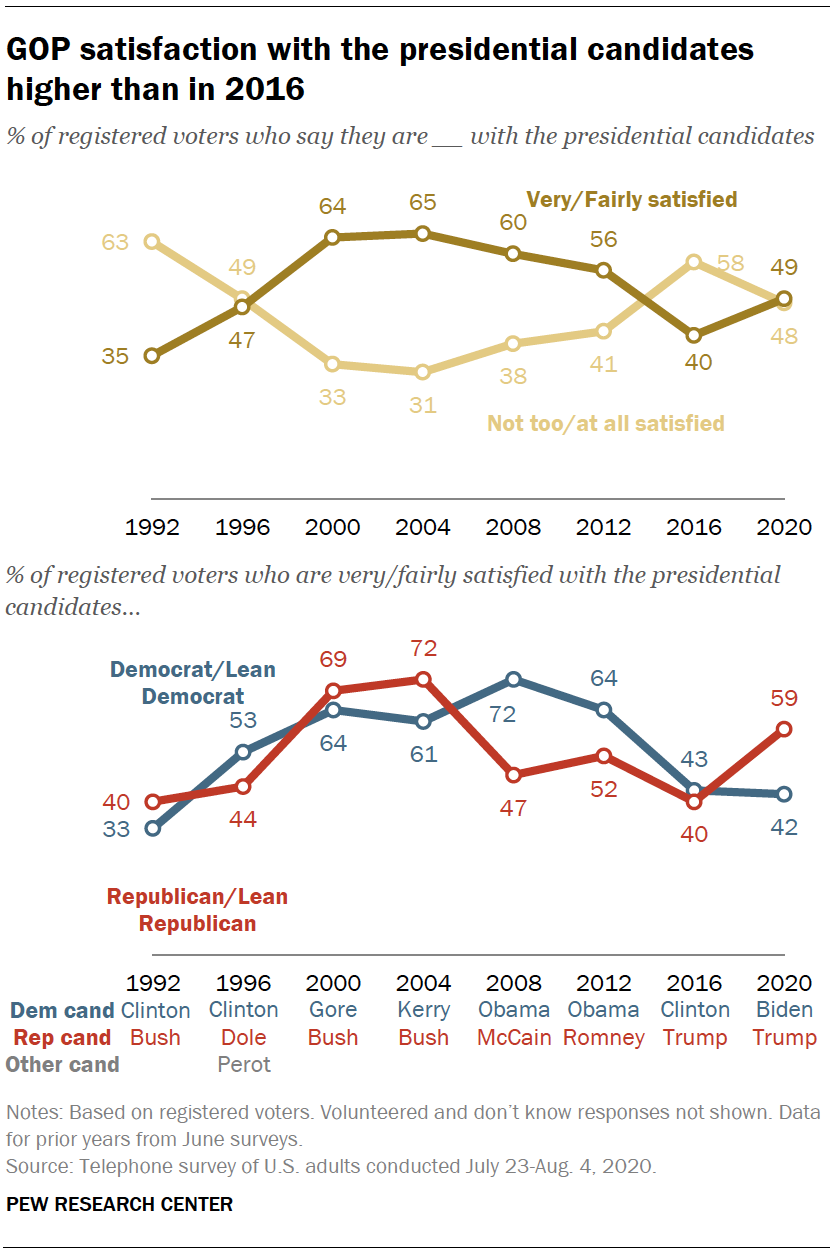 About six-in-ten Republican voters (59%) say they are very or fairly satisfied with the presidential candidates, compared with 42% of Democratic voters. In 2016, there was no significant partisan gap in satisfaction with the candidates.

Few say neither Trump nor Biden would make a good president; even fewer say either would 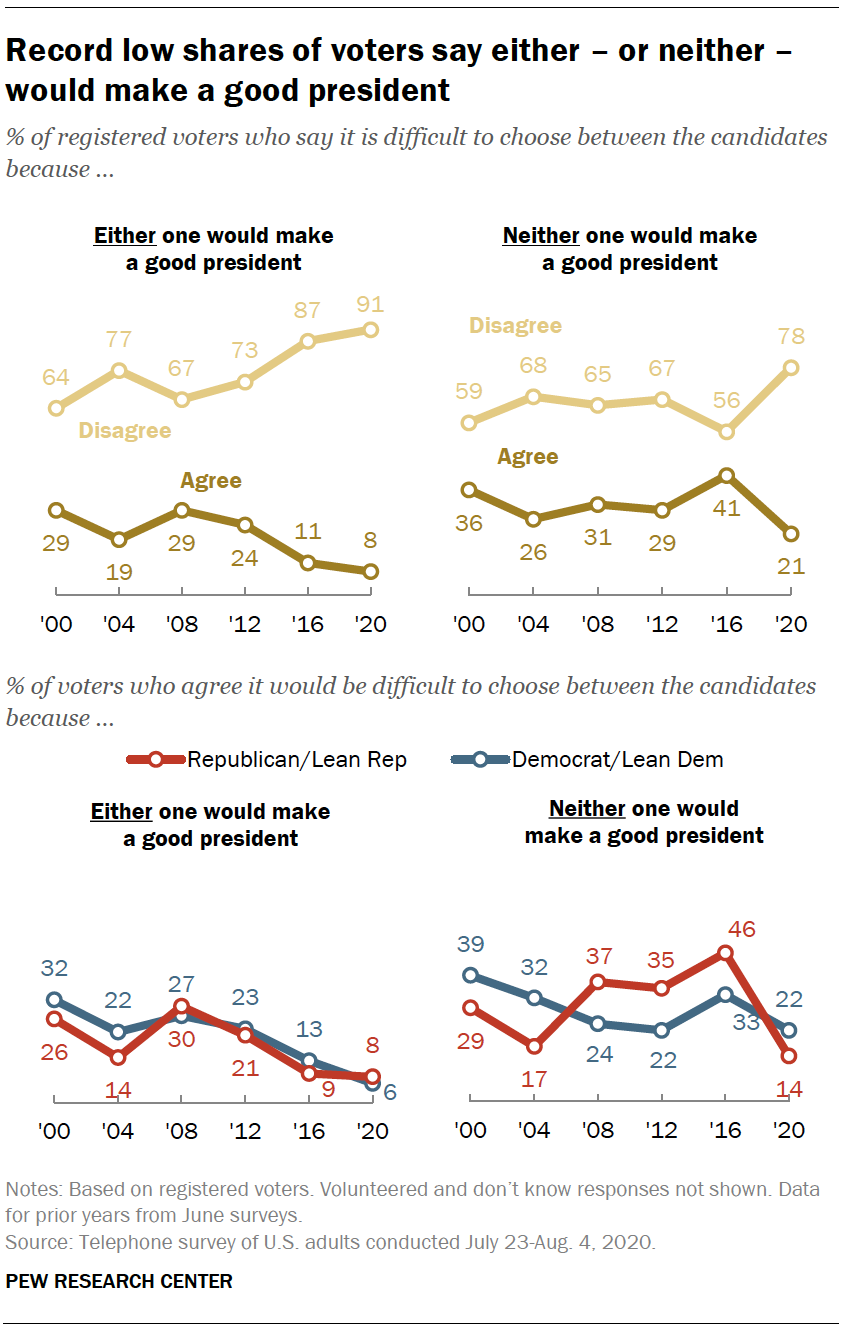 Few in either party say it would be difficult to choose between the candidates because either one would make a good president (just 8% of Republican voters and 6% of Democratic voters).

Just 14% of GOP voters say it would be difficult to choose between the candidates because neither one would make a good president – 46% said this of the Trump-Clinton race in 2016. While a slightly larger share of Democratic than Republican voters today say the choice is hard because neither Biden nor Trump would make a good president, just 22% say this, down from the 33% of Democratic voters who said this about the choice between Clinton and Trump in 2016. 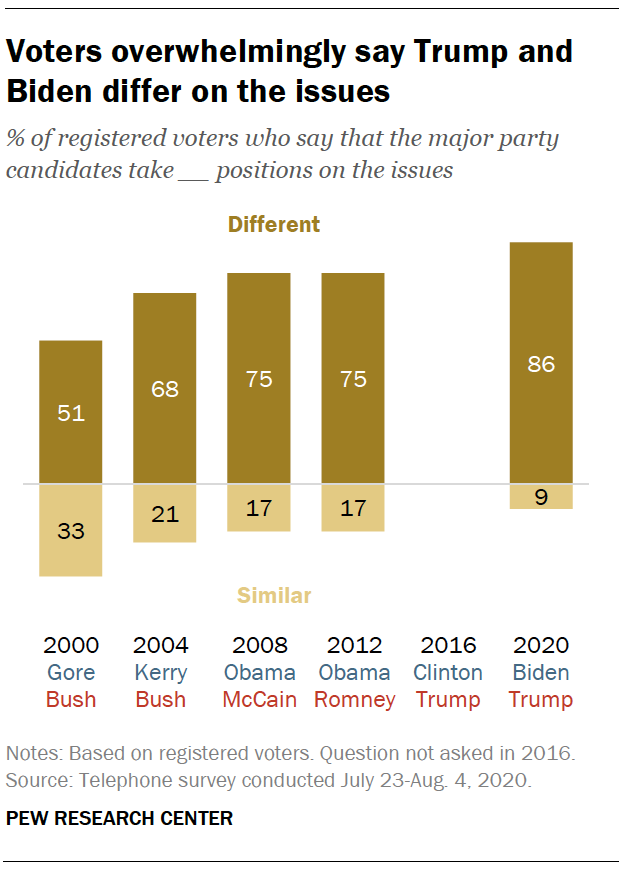 In their own words: Supporters of Trump and Biden give reasons for their voting decisions and concerns about their candidates

When asked to explain in their own words the main reasons why they support Joe Biden or Donald Trump, Biden supporters are far more likely than Trump supporters to volunteer that opposition to the other candidate is a main motivating factor.

A majority (56%) of registered voters who support Biden and those who lean toward supporting him say their main reason for supporting him is that he is not Trump. Just 19% of Trump supporters cite opposition to Biden as a central motivation.

Voters who cite negative reasons for their support of a candidate do not mince words when describing the opponent. A 37-year-old living in the South says the main reason they support Biden is “because having Trump as president for another four years will be a disaster for this country.”

A 44-year-old Southern Trump supporter uses similar language to explain their rationale for voting for Trump, saying simply, “Because Biden would be a disaster.”

Biden supporters’ relatively large emphasis on voting against Trump, and Trump supporters’ relatively large emphasis on other factors, represents a change from four years ago. In 2016, nearly identical proportions of Trump supporters (33%) and Clinton supporters (32%) said that opposition to the other candidate was a main factor in their likely vote choice. In 2020, supporters of both candidates are more likely to cite their attitudes about Trump, the incumbent, in explaining their decisions.

About one-in-five Trump supporters (23%) say they are basing their support on Donald Trump’s leadership or performance, while a similar share (21%) cite Trump’s position on the issues. About one-in-ten (11%) point to Trump’s personality and willingness to speak his mind, compared with about 19% of Trump supporters who cited similar reasons in 2016. A 58-year-old Trump supporter in the South explains their choice this way: “Because he gets stuff done. He’s not perfect, but he’s honest and tries.”

While opposition to Trump is cited most often as the main reason for supporting Biden, 19% mention Biden’s leadership and 13% cite his performance or his personality. Some Biden supporters describe Biden’s attributes in relative terms: As a 41-year-old Northeastern Biden supporter writes, “I think he has stronger moral fortitude, is kinder, and will think more before he speaks than our current president.”

When asked what, if anything, concerns them about their preferred candidate, one-quarter of registered voters who support Trump express concerns about his temperament or personality. This includes 13% of Trump supporters who specifically worry that he speaks without thinking or is too hot-headed.

A relatively large share of Trump supporters (14%) also express concerns about their candidate’s use of Twitter. Some say that Trump spends too much time or focuses too much of his attention on Twitter, while others worry about the content he posts. One 47-year-old supporter in the West writes that they are concerned about: “His tweets. He doesn’t THINK before he tweets.” Several others describe his use of Twitter as “immature” or “childish.”

About one-in-ten Trump supporters (11%) express concerns about the president’s performance in office to date. A similar share (9%) are concerned about one or more of his issue positions, including 3% who specifically cite his handling of the COVID-19 pandemic.

About three-in-ten Biden supporters list Biden’s age or health as a major concern regarding their chosen candidate. While many simply say that his age concerns them, others are more specific. For example, one 73-year-old Biden supporter in the Northeast wishes that “he were younger so that I could feel confident in him in the remaining days of the campaign. I worry about him screwing up.” A Western 46-year-old writes: “Biden’s age concerns me but I am also concerned about Trump’s age. I am not sure either when one considers age and race can fully grasp what is happening in the country but Biden is more empathetic to the plight and needs of people of color.”

Despite several Biden supporters noting the candidates’ similar ages (Trump is currently 74 while Biden is 77), just 1% of Trump supporters name the incumbent’s age or health as a concern when discussing their own preferred candidate.

Voters who support Biden also express concerns about his issue positions (15%), his performance as a candidate (12%), his history in public life (11%) and the magnitude of the job he would face in office (10%). Included among those concerned about Biden’s history are 4% of Biden supporters who specifically note his behavior toward women, some of whom mention recent allegations of sexual misconduct.

Next: 3. Views of the 2020 campaign and voting in November
← Prev Page
Page1Page2You are reading page3Page4Page5Page6Page7Page8
Next Page →