Pew Research Center conducted this study to understand how Americans view the upcoming 2020 presidential election and the presidential candidates. For this analysis, we surveyed 11,929 U.S. adults, including 10,543 registered voters, during the last week of September and the first week of October 2020. The survey was in the field when Trump announced, early on the morning of Oct. 2, that he and first lady Melania Trump had contracted COVID-19.

Everyone who took part in this survey is a member of Pew Research Center’s American Trends Panel (ATP), an online survey panel that is recruited through national, random sampling of residential addresses. This way nearly all U.S. adults have a chance of selection. The survey is weighted to be representative of the U.S. adult population by gender, race, ethnicity, partisan affiliation, education and other categories. Read more about the ATP’s methodology.

The 2020 presidential campaign has been repeatedly rocked by seismic events – from the outbreak of a devastating pandemic to President Donald Trump contracting COVID-19. Yet in at least two important respects, not much has changed: Joe Biden continues to hold sizable advantages over Trump on most major issues and key personal traits, as well as in overall voter preferences. And voters continue to be highly focused on the election and attach great importance to its outcome.

With less than a month to go before the election, a majority of registered voters (57%) say they are very or somewhat confident in Biden to handle the public health impact of the coronavirus, while 40% express a similar level of confidence in Trump. In June, Biden held a narrower, 11 percentage point lead on handling the coronavirus outbreak (52% Biden, 41% Trump).

The new survey by Pew Research Center, conducted Sept. 30-Oct. 5 among 11,929 U.S. adults, including 10,543 registered voters, finds that Biden maintains an overall lead in voter preferences: 52% of registered voters say if the election were held today, they would vote for Biden or lean toward voting for him, while 42% support or lean toward voting for Trump. Another 4% of voters back Libertarian Jo Jorgensen, while 1% support Green Party candidate Howie Hawkins in the 2020 election. (See detailed tables for full demographic breaks on voter preferences.)

The survey was in the field when Trump announced on Twitter, early on the morning of Oct. 2, that he and first lady Melania Trump had contracted COVID-19. There are no significant differences in voter preferences, or in confidence in the two candidates to handle the impact of the coronavirus, before and after his announcement.

Trump’s handling of the nation’s economy remains a relative strong point. About half of voters (52%) express confidence in Trump to make good decisions about economic policy, one the highest shares expressing confidence in the president on any of the six issues on the survey. However, about as many voters (51%) have confidence in Biden on the economy.

The survey finds that voters view Biden much more positively than Trump for compassion, honesty and being a good role model. Nearly twice as many voters say “compassionate” describes Biden very or fairly well than say it applies to Trump (67% vs. 34%). More than half of voters (53%) say Biden is honest, compared with 35% who describe Trump as honest. And far more voters say Biden is a good role model (54% vs. 28%). 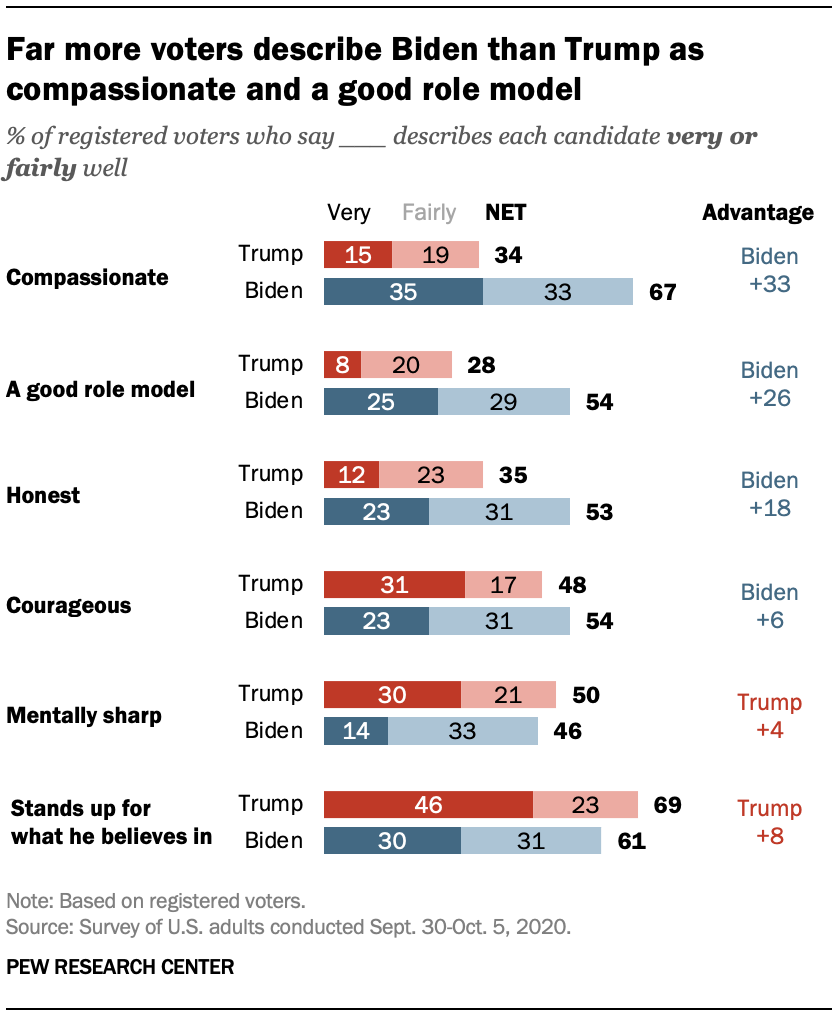 The gap is narrower on other personal attributes. Biden holds a narrow 6-point edge in “courageous” (54% Biden, 48% Trump); slightly more say Trump than Biden is mentally sharp (50% Trump, 46% Biden). Among six personal traits included, Trump holds his widest edge in standing up for his beliefs: 69% say this describes Trump very or fairly well, compared with 61% who say it describes Biden well.

As was the case in the summer, voters’ preferences – regardless of whom they favor – remain very much centered on Trump. Just 36% of Biden voters view their vote more as an expression of support for the former vice president; 63% view it as vote against Trump. By contrast, 71% of Trump supporters say their vote is a vote for Trump. These views have changed only modestly since June.

The supporters of both candidates remain highly engaged in the election. Identical shares of registered voters who favor Trump and Biden (71% each) say they have given a lot of thought to the candidates running for president. And nearly eight-in-ten voters (78%) – again, comparable majorities of both candidates’ supporters – say it “really matters” who wins.

While voters on both sides share a sense of the importance of the election, they also share concern about the country’s future if the opposing candidate wins. Fully 89% of Trump supporters say that if Biden wins, they not only would be very concerned over the country’s direction, they believe it would lead to “lasting harm” for the country. A nearly identical majority of Biden supporters (90%) say Trump’s election would result in lasting harm to the United States. 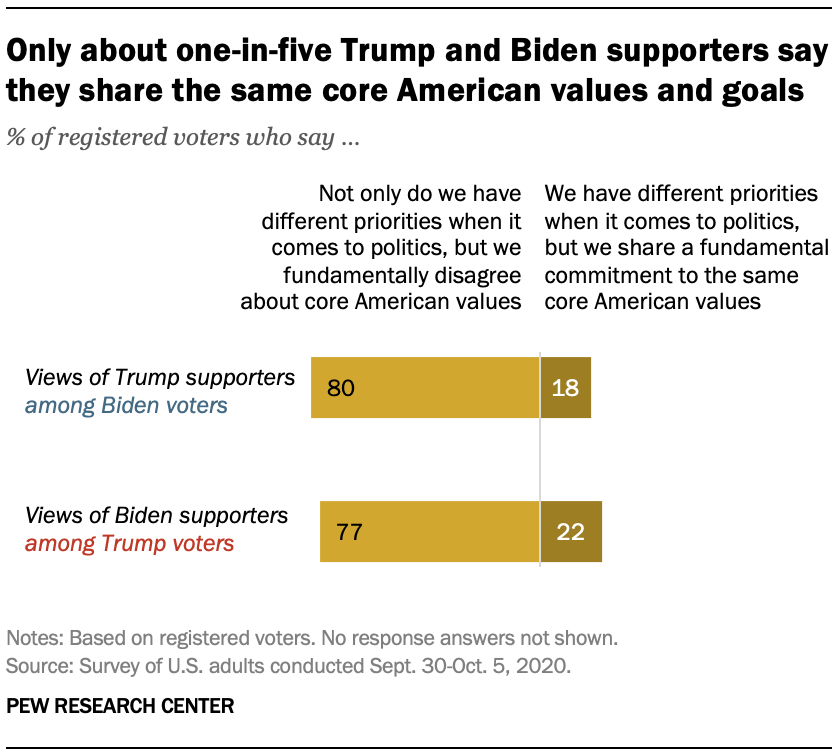 And voters who support both Trump and Biden say their differences extend beyond policies to disagreements over core values. Overwhelming shares of voters who support each candidate say that, when asked to think about those who favor their opposing candidate, they not only have different views on politics and policies, they also have “fundamental disagreements on core American values and goals.”

Roughly eight-in-ten of those who support Biden (80%) and Trump (77%) say they fundamentally disagree about core values; only about one-in-five say their differences are limited to politics and policies.

However, there is a widespread sense among voters that if their candidate wins the election, the next president should primarily focus on the concerns of all Americans, not just those who voted for him. This view – like the belief that the country may face lasting harm if the opposing candidate wins – is shared widely among the supporters of both candidates. Fully 89% of Biden supporters and 86% of Trump supporters say that if their candidate is victorious, he should focus primarily on the concerns of all Americans, even if it means disappointing some of his supporters.

Next: 1. The Trump-Biden presidential contest
← Prev Page
You are reading page1Page2Page3Page4Page5Page6Page7Page8Page9
Next Page →

Amid Campaign Turmoil, Biden Holds Wide Leads on Coronavirus, Unifying the Country
1. The Trump-Biden presidential contest 2. Voters’ feelings about the election and possible outcomes 3. Perceptions of Trump and Biden 4. Voter engagement and interest, voting by mail and in person 5. Views of the state of the nation and the U.S. economy Acknowledgments Appendix Methodology