The public’s evaluation of the way Trump is handling his job as president is now roughly on par with views at the outset of his presidency, reflecting a modest rise in approval over the last month. Today, 37% of Americans approve of the job that Trump is doing, while 56% disapprove; last month, 32% approved while 63% disapproved.

Those with postgraduate degrees are significantly less likely than others to approve of Trump’s job performance. Just 23% say they do compared to 31% of those with bachelor’s degrees, and 40% of those with less education.

There also are wide divides by religious tradition. White evangelical Protestants continue to be the religious group with the strongest approval of Trump’s job with 72% approving. White mainline Protestants are divided (48% approve, 44% disapprove). Six-in-ten Catholics (60%) disapprove of the job Trump is doing in office, and Black Protestants and the religiously unaffiliated overwhelmingly disapprove of how he is handling his job (76% and 73%, respectively). 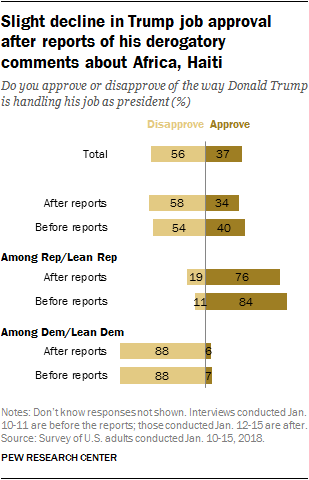 During the period the survey was being conducted it was widely reported that Trump made derogatory remarks about African countries and Haiti during a bipartisan meeting in the Oval Office on Jan. 11. Overall, Trump’s approval was slightly higher in the days before widespread coverage of his remarks (40% Jan. 10-11) than after his comments sparked controversy (34% Jan. 12-15).

The dip in Trump approval was concentrated among Republicans and those who lean toward the Republican Party. Prior to the reports of Trump’s comments, 84% of Republicans said they approved of the job he was doing. After the comments were widely reported, that figure dropped to 76%. There was no significant difference in evaluations of Trump’s job performance over the period of the survey among Democrats and those who lean toward the Democratic Party.

How will Trump’s presidency be viewed in the long run? 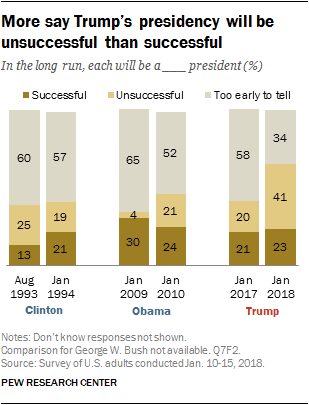 As Donald Trump’s presidency approaches the one-year mark, 41% say Trump will be an unsuccessful president in the long run, while 23% say he will be successful and 34% say that it is too early to tell.

The share of the public who say Trump’s presidency will be successful over the long term is little changed from shortly before he took the oath of office last January. But the share who now say Trump will be unsuccessful has increased 21 percentage points (from 20% to 41%) since then, while the share who say it is too early to say has dropped from 58% to 34%.

While the share who expect Trump to be successful in the long run is similar to the share who said this of Barack Obama (24%) and of Bill Clinton (21%) at the same points in their presidencies, only about two-in-ten Americans expected that Obama (21%) or Clinton (19%) would be unsuccessful in the long run. Instead, for both of these prior presidents, a majority of Americans felt it was too early to say. (This question was not asked about George W. Bush in early 2002.) 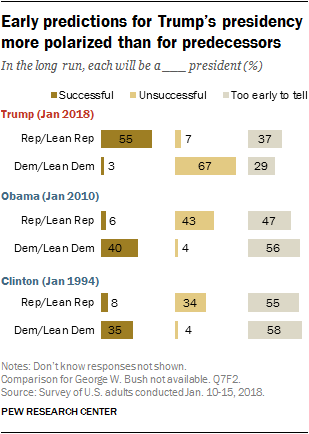 Republicans and Democrats have very different views of whether Trump’s administration will be a success in the long run. And in both parties, smaller shares reserve judgement than did so for Obama and Clinton, resulting in even more polarized early assessments of Trump’s presidency than for his predecessors.

Currently, just 37% of Republicans say it is too early to tell how the Trump presidency will unfold; majorities of Democrats said this of Obama in January 2010 (56%) and Clinton in 1994 (58%). For all three presidents, fewer than one-in-ten of those who affiliate with or lean to the president’s party say the president will be unsuccessful.

Conversely, while two-thirds of Democrats (67%) say Trump will be unsuccessful in the long run, that compares with 43% of Republicans who said this of Obama in January 2010 and 34% of Clinton in 1994. While few Republicans expected Clinton or Obama’s presidencies to be successful, roughly half said it was too early to tell at this point, compared with just 29% of Democrats who say the same today of Trump. 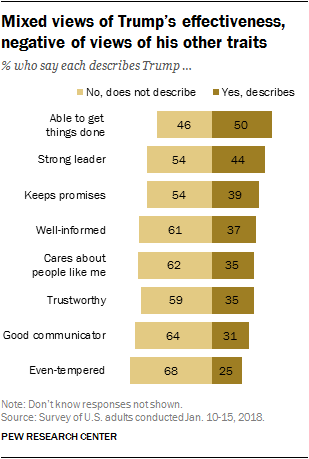 The public holds generally negative assessments of Trump across a range of personal traits and characteristics, and there has been little change in public perceptions of most of these traits since February 2017, shortly after he took office.

Perceptions of Trump’s other personal traits have changed less over the past year. Half describe Trump as able to get things done, while 46% say this does not describe him. On all other traits included in the survey, more view him negatively than positively. 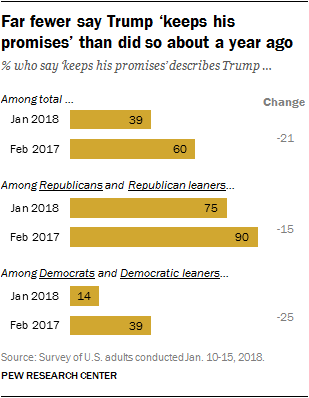 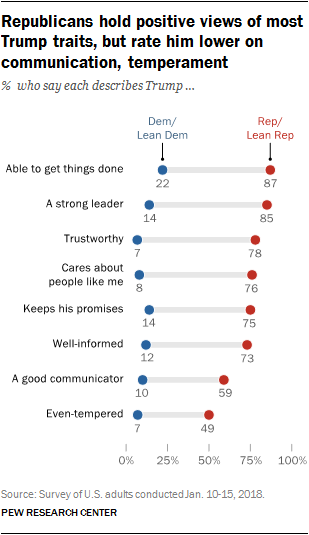 Across most dimensions, large shares of Republicans and Republican leaners describe Trump positively. For instance, 87% think of him as able to get things done and 85% call him a strong leader.

About three-quarters (76%) describe Trump as someone who “cares about people like me,” while a similar share (73%) say he is well-informed. On both of these measures, GOP views are 12 percentage points lower than they were last February (when 84% and 81% said this, respectively).

A smaller majority of Republicans describe Trump as a good communicator (59% say this today, down from 67% last year). Trump gets his lowest marks among Republicans when it comes to his temperament: 49% say they think of him as even-tempered, while 44% say they do not think of him this way; this is nearly identical to GOP views on this trait at the beginning of Trump’s presidency. 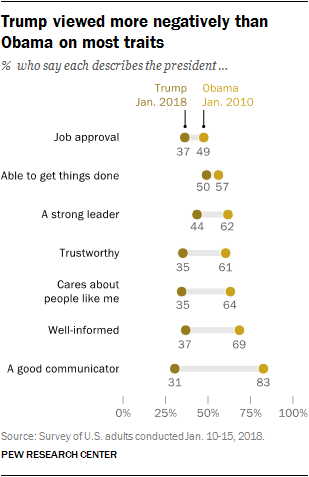 At the close of his first year in office, impressions of Trump on six personal traits lag behind those of his predecessor, Barack Obama, at a similar point. Yet the size of the differences varies across characteristics.

On the other hand, the differences are much narrower in perceptions of each president’s ability to get things done. In January 2010, 57% of the public said Obama was “able to get things done,” compared with 50% who say this of Trump today. This seven percentage point gap is smaller than for other traits included in both surveys.

Confidence in Trump on key issues 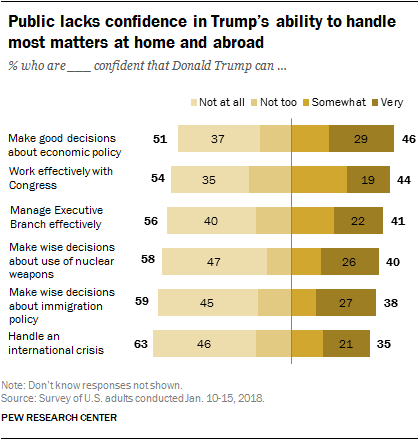 The public expresses mixed or low confidence in Donald Trump to handle a range of issues and aspects of the presidency. Roughly half (46%) say they are very (29%) or somewhat (17%) confident that Donald Trump can make good decisions about economic policy, while about as many (51%) say they are not too (14%) or not at all (37%) confident in him in this area.

Public views tilt more negative when it comes to Trump’s handling of other aspects of the presidency. Overall, 54% say they are not too or not at all confident that Trump can work effectively with Congress, compared with fewer (44%) who are very or somewhat confident in Trump’s ability to do this. Similarly, more express little or no confidence in Trump to manage the executive branch effectively (56%) than say they are very or somewhat confident that he can do this (41%).

Doubts about Trump extend beyond his ability to manage Washington: Nearly six-in-ten express little or no confidence in Trump to make wise decisions about immigration policy (59%) or the use of nuclear weapons (58%). When it comes to his ability to handle an international crisis, 63% say they have not too much or no confidence at all in Trump, compared with 35% who say they are very or somewhat confident in him.

These partisan differences are particularly pronounced over confidence in Trump’s ability to make wise decisions about immigration policy and nuclear weapons. 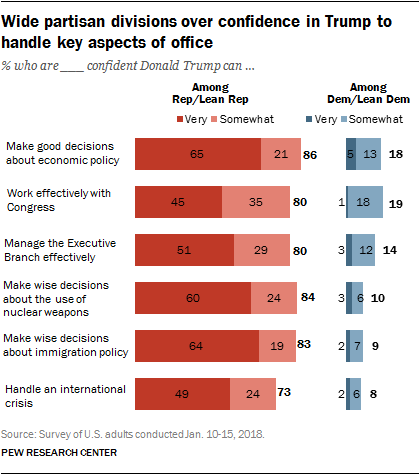 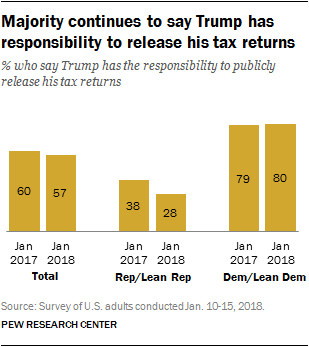 Democrats remain far more likely to say this than Republicans: 80% of Democrats and Democratic leaners say Trump has this responsibility; just 28% of Republicans and Republican leaners say the same.

While Democratic views on this question are similar to last year, there has been a 10-percentage point drop in the share of Republicans who say Trump has a responsibility to release his tax returns publicly since January 2017.

The public remains skeptical that Trump keeps his own business interests separate from the decisions he makes as president: About four-in-ten (41%) say they are very (23%) or somewhat (18%) confident Trump does this, while a 57% majority is either not at all (43%) or not too (14%) confident. These views are little different from February 2017. 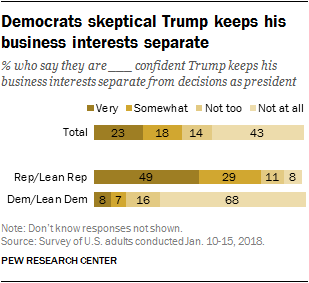 No change in views of Mueller’s handling of Russia investigation 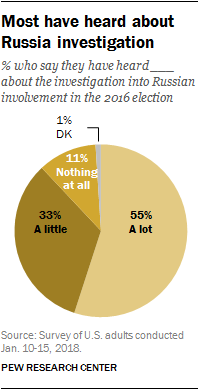 While majorities across all demographic groups have heard about the investigation, older people and those with more education are more likely than others to say they have heard a lot. For example, while 69% of those ages 65 and older report hearing or reading a lot about the Russia investigation; that compares with 53% of those 30-49 and just 36% of those who are 18-29. 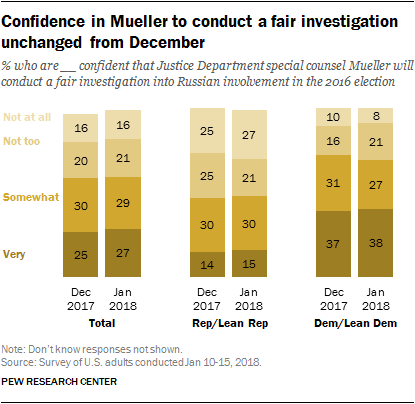 The partisan divide in confidence in Mueller is also little different than it was in December. Among Republicans and Republican-leaning independents, 45% say they are very or somewhat confident he will conduct a fair investigation, while 48% express little or no confidence. By contrast, about two-thirds of Democrats and Democratic-leaning independents (65%) are at least somewhat confident in Mueller to conduct a fair inquiry; just 29% say they are not too or not at all confident. 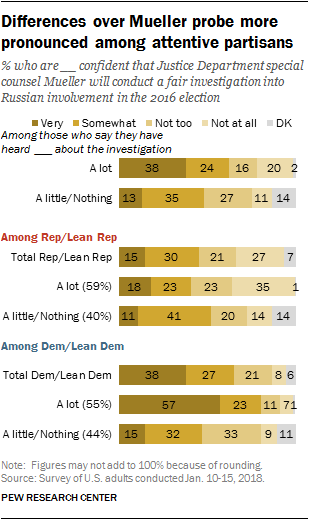 Next: 2. The 2018 congressional elections
← Prev Page
Page1You are reading page2Page3Page4Page5
Next Page →

Public Sees Better Year Ahead; Democrats Sharpen Focus on Midterm Elections
1. Trump at year one: Job approval, confidence on issues, personal traits
How will Trump’s presidency be viewed in the long run?Views of Trump’s personal traits and characteristicsPublic perceptions of presidential traits: Trump and Obama at first yearConfidence in Trump on key issuesTrump’s tax returns and business interestsNo change in views of Mueller’s handling of Russia investigation
2. The 2018 congressional elections 3. Outlook for 2018, views of political compromise Methodology