The public’s expectations for 2018 are much more positive than they were for 2017. But as been the case for more than a decade, the outlook for the year ahead is divided along partisan lines.

About twice as many Republicans and Republican-leaning independents as Democrats and Democratic leaners expect this year to be better than last year (88% vs. 42%). Still, the partisan gap was even wider last year, following the 2016 election; 83% of Republicans expected a better year in 2017, compared with just 24%of Democrats. 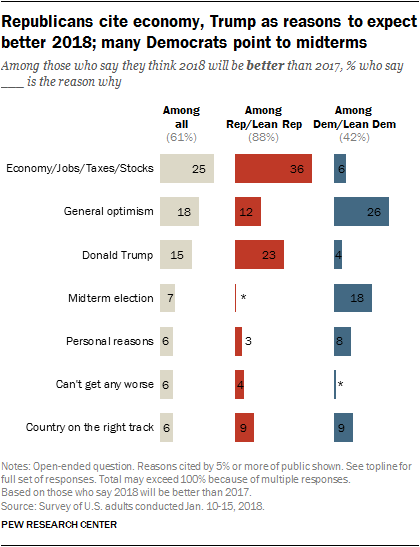 Republicans and Democrats who expect a better year ahead offer very different reasons for their views. Among Republicans and Republican leaners, 36% cite the economy and jobs, while 23% say Trump is a reason they think 2018 will be better than 2017.

Few Democrats and Democratic leaners say the economy (6%) or Trump (4%) are reasons they are optimistic about the year ahead. Instead, 26% of Democrats describe general optimism about the new year, and 18% say they think 2018 will be better than 2017 because of the midterm elections this fall. Fewer than 1% of Republicans cite the midterms as a reason they expect a better year in 2018. 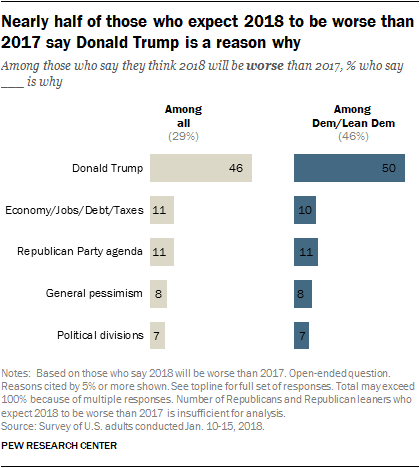 Among those who expect a worse year in 2018, an overwhelmingly Democratic group, Trump is the most frequently cited reason they feel this way. Almost half (46%) of those who expect a worse year in 2018 say Trump is a reason for this view. Far smaller shares cite other factors, such as the economy, debt and taxes (11%) or the Republican Party’s agenda (also 11%) as to why they think 2018 will be worse than 2017.

Should Trump and Democratic leadership work together in 2018? 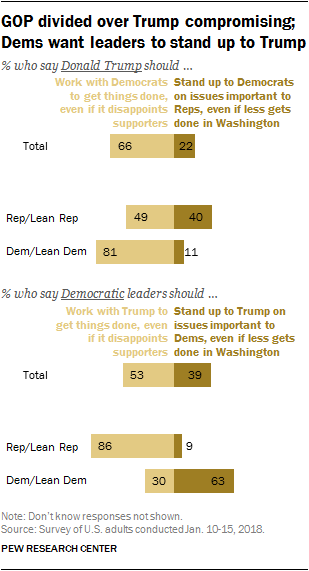 In November 2016, the pattern of opinion was similar among those who had voted in the presidential election.

Public Sees Better Year Ahead; Democrats Sharpen Focus on Midterm Elections 1. Trump at year one: Job approval, confidence on issues, personal traits 2. The 2018 congressional elections
3. Outlook for 2018, views of political compromise
Should Trump and Democratic leadership work together in 2018?
Methodology