With 10 months to go before the congressional elections, the divisions reflected in results from recent national elections – by race and ethnicity, age and education – are evident in preferences on the generic ballot for Congress.

There also are stark divides across levels of educational attainment. A substantial majority (70%) of registered voters with a postgraduate degree say they would vote for or lean toward the Democratic candidate. A smaller majority (58%) of those with a college degree say the same. By contrast, those with a high school degree or less education are more divided (45% support the Democratic candidate, 48% the Republican candidate).

Among whites, the education divide is even wider. By roughly two-to-one, a majority of whites with a postgraduate degree say they support the Democratic candidate over the Republican candidate (65% vs. 29%). Among whites with a high school degree or less education, the reverse is true: 65% support the Republican candidate, compared with just about a quarter (28%) who prefer the Democratic candidate.

More Democrats than Republicans are ‘looking forward’ to the election 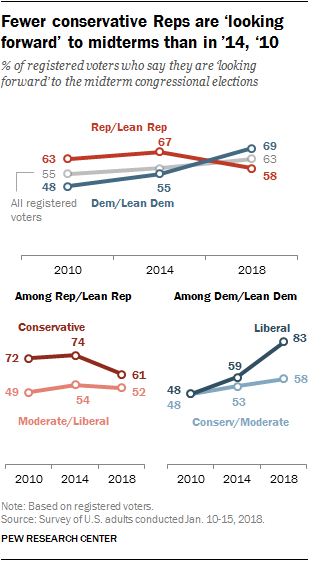 Reflecting partisan control in Washington, interest in congressional elections among partisans has shifted since the past two midterms.

Today, Democrats and Democratic leaners (69%) are more likely than Republicans and Republican leaners (58%) to say they are looking forward to the congressional elections. By contrast, in the midterm years during Barack Obama’s presidency, Republicans expressed more enthusiasm than Democrats.

Trump a factor in midterm vote – for opponents and supporters 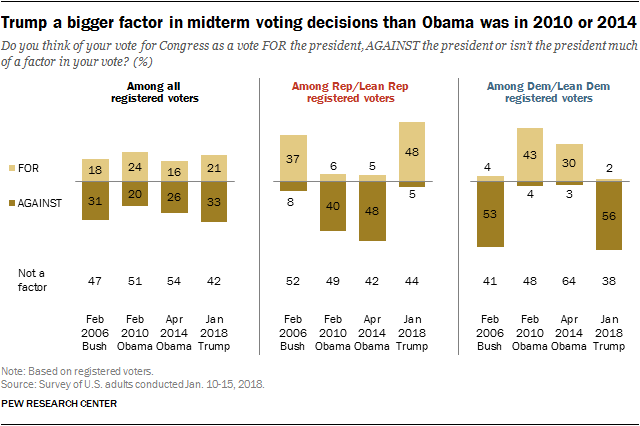 Nearly half of Republicans and Republican-leaning voters (48%) say they consider their vote for Congress as a vote for Donald Trump; 5% say it’s a vote against the president, and 44% say Trump isn’t much of a factor. More GOP voters today say their vote is in support of Trump than said this in February 2006 (37%), during Bush’s second term. 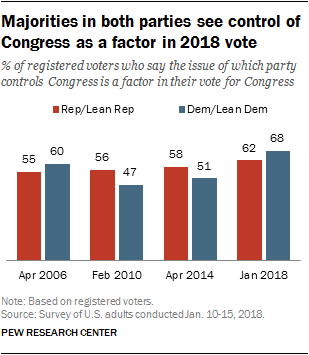 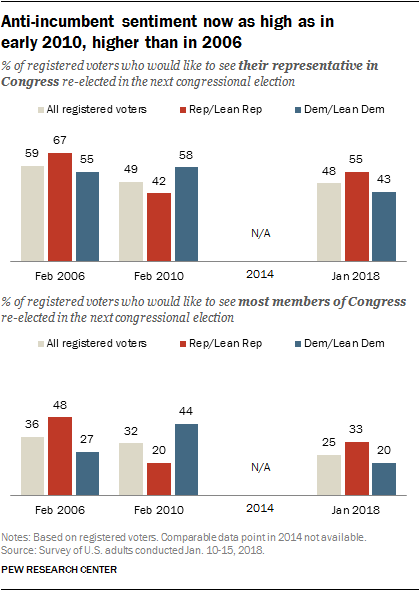 While the Republican Party has majorities in the House and Senate, Republican voters are generally less supportive of incumbents than they were in early 2006, when they also had congressional majorities.

Democrats are even less likely than Republicans to express support for congressional incumbents. Just 43% want their own members of Congress re-elected, while 20% say they would like to see most lawmakers re-elected.

Next: 3. Outlook for 2018, views of political compromise
← Prev Page
Page1Page2You are reading page3Page4Page5
Next Page →