In a major survey of opinions about government last year, 79% of Americans said the country is more politically divided than in the past. In the wake of Trump’s election, few expect partisan relations in Washington to improve. 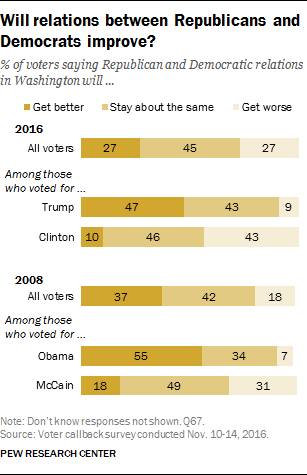 Today, about a quarter of voters (27%) think that relations between the two parties will improve in the coming year, while as many (27%) say they will worsen; 45% expect they will stay about the same.

Trump voters are much more optimistic in their feelings about the prospect of a better relationship. Nearly half of Trump voters (47%) feel that partisan relations will improve compared with only 9% who say they will get worse (43% expect little change).

There was somewhat more optimism about improved partisan relations eight years ago, after Obama’s first victory. At that time, 37% expected relations between Republicans and Democrats to get better, while just 18% said they would get worse; 42% expected little change.

Trump’s supporters are slightly less optimistic about improvements in partisan relations than Obama voters were eight years ago (47% of Trump voters expect improvements, 55% of Obama voters did in 2008). And Clinton voters are more likely than McCain voters were in 2008 to say relations will get worse (43% of her voters say this today, 31% of McCain’s said this in 2008).

Should Trump and Democratic leadership work together? 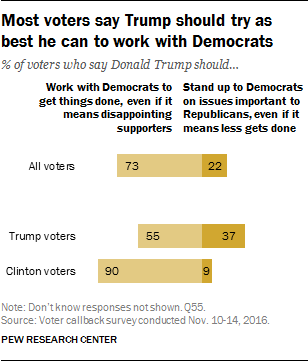 Almost three quarters (73%) of all voters – including 55% of his own supporters and fully 90% of Clinton’s – say that Donald Trump should try as best he can to work with Democratic leaders in Washington to accomplish things, even if it means disappointing some groups of Republican supporters.

About four-in-ten Trump voters (37%) say that he should stand up to the Democrats – who are in the minority in both the House and Senate – on issues that are important to Republican supporters, even if it means less gets done in Washington.

In 2012, the pattern of opinion was very similar: 56% of Obama voters and 90% of Romney backers wanted to see Obama work with Republicans, who controlled the House at the time.

In 2008, as Barack Obama was first preparing to enter office, nearly eight-in-ten (78%) of Obama’s voters said that Democratic leaders in Washington should work with Republicans even at the risk of disappointing their supporters, and a similar proportion of McCain’s voters (76%) said the same. 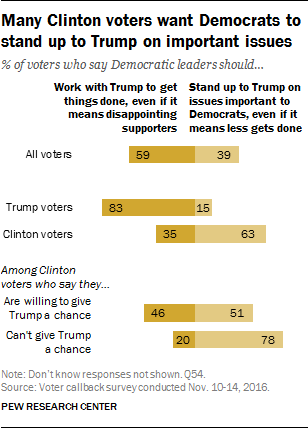 More than eight-in-ten Trump voters (83%) say Democratic leaders should work with Trump to get things done even if it means disappointing their supporters, but that view is held by just 35% of Clinton voters. Nearly two-thirds (63%) of Clinton voters say that Democrats should stand up to Trump on issues that are important to Democrats even if it means less gets done in Washington.

This contrasts with the feelings among those who voted for the losing candidate in 2008, when 58% of McCain voters said Republican leaders should try their best to work with Obama.

Democrats are more divided over whether their party’s future should be more liberal (49%) or more moderate (47%). The share of Democratic voters who would like to see a more liberal stance is up significantly from recent years. Two years ago, in the week after the midterm election, just 38% wanted to see the party move to the left. And following both of Obama’s presidential victories, only a third of Democratic voters said this. 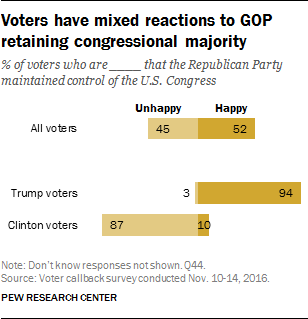 Voters have mixed reactions to the results of congressional elections. About half (52%) of voters say they are happy that the Republican Party maintained control of the U.S. Congress, while 45% say they are unhappy.

These feelings predictably align by support for the top of the ticket. Trump voters overwhelmingly say they are happy (94%) the GOP retained congressional control, while the vast majority of Clinton supporters (87%) are unhappy.

Next: 3. Voters’ evaluations of the campaign
← Prev Page
Page1Page2You are reading page3Page4Page5Page6
Next Page →

Low Marks for Major Players in 2016 Election – Including the Winner 1. Presidential election reactions and expectations
2. Prospects for bipartisan cooperation, ideological direction of the parties
Should Trump and Democratic leadership work together?Growing share of Democrats want to see the party move to the leftDivided reaction to the GOP maintaining congressional control
3. Voters’ evaluations of the campaign 4. The voting process Methodology