When voters are asked to grade the candidates, parties and press on how they conducted themselves during the presidential campaign, they award the lowest grades for nearly all involved since the quadrennial post-election surveys began in 1988. 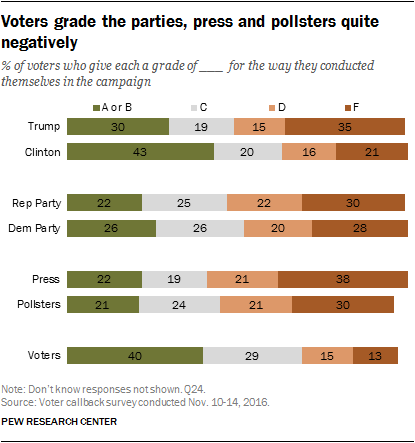 Hillary Clinton’s grades are better than Trump’s, which marks the first time a losing candidate has received more positive grades than the winner. Clinton receives an A or B from 43% of voters; 20% award Clinton a C, while nearly four-in-ten give Clinton a D (16%) or F (21%). Clinton’s average grade is a C.

The press and pollsters also are viewed negatively for their performance during the campaign. Only 22% give the press an A or B grade; 38% give them a failing grade. For pollsters, just 21% give them an A or B, while three-in-ten (30%) give them an F.

Voters also are not particularly positive about their own conduct in the campaign. Just 40% say “the voters” deserve a grade of A or B, 29% give them C, 15% D and 13% F. Still, on average, voters give themselves C, which is higher than grades they give other campaign actors aside from Clinton. 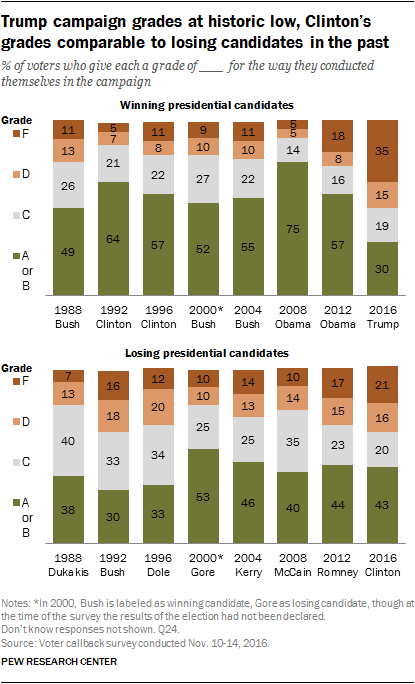 Trump receives historically low grades overall (30% A or B), in part because his own supporters are not all that positive about his campaign conduct. While a majority (58%) of Trump voters give Trump an A or B for his conduct during the campaign, just 17% give him an A.

Looking at Obama’s two campaigns, only 12% of McCain voters gave him a failing grade in 2008, while 37% of Romney voters gave Obama an F four years ago. And just 22% of John Kerry’s voters in 2004 gave George W. Bush a failing grade.

Clinton’s overall grades are comparable to Romney’s in 2012 and only slightly worse than McCain’s in 2008. Today, 38% of Trump voters give Clinton a failing grade, similar to the share of Obama supporters who “failed” Romney in 2012 (32%), though just 15% of Obama voters gave McCain an F in 2008.

Both political parties receive their lowest grades ever for their conduct during the campaign. In the past, the party that won the White House was graded more positively than the losing party, but that is not the case this year. (In 2000, the grades for the two parties immediately following the election were nearly identical in the post-election survey conducted several weeks before the outcome was certified.)

Overall, just 26% grade the Democratic Party at A or B, while 22% give the same grade to the GOP; nearly identical shares also “fail” both parties (30% Republican, 28% Democratic).

Although the Republican Party won the White House and retained control of the House and Senate, Trump voters are less positive about the performance of the GOP than Romney’s supporters were four years ago. Just 38% of Trump voters give the GOP an A or B for its campaign conduct. That is much lower than the 58% of Romney voters who gave the party an A or B in 2012, though about the same as the share of McCain voters who did so four years earlier (43%).

Negative assessments of the way the press and pollsters conducted themselves in the campaign also are higher than in previous elections.

Overall, 38% of voters give the press a failing grade – including 60% of Trump supporters. Voters who back Republican candidates have long been highly critical of the press, but this marks the first time a majority of any presidential candidate’s supporters has “failed” the press for its campaign conduct. In 2008, 44% of McCain voters gave the press a grade of F, as did 45% of Romney voters four years ago.

As is almost always the case, “the voters” receive lower grades from supporters of the losing candidate than from those who back the winning candidate. Just 27% of Clinton supporters give the voters a grade of A or B; by contrast, a majority of Trump backers (55%) give top grades to the voters.

In each of the four elections going back to 2000, two-thirds or more of voters expressed satisfaction with the candidates. In 2012, 70% of voters said they were satisfied with their choices; just 28% were not very or not at all satisfied.

This perspective may have set in early with 2016 voters. In June, registered voters expressed comparably sour views on their choices. Just 40% said they were satisfied with the candidates in the race.

Supporters of losing presidential contenders consistently express less positive views of the field after elections, but Clinton voters are particularly dissatisfied. Only 25% express satisfaction with their options for president this year. Not since Bob Dole lost to Bill Clinton in 1996 have the supporters of a losing candidate expressed so little satisfaction with their choices. Then, just 31% of Dole’s voters said they were ultimately satisfied with the candidates running.

Campaign viewed as heavy on negative campaigning, light on issues

Voters in 2016 found this presidential campaign to be far more negative than past elections and to include far less discussion of issues than usual.

Almost across the board, voters saw this campaign as more negative than past elections. About nine-in-ten (92%) say there was more mudslinging or negative campaigning compared with previous contests, up from 68% who said that in 2012, up 38 points from 2008 (54% more negative) and 20 points higher than the previous high of 72% in 2004.

Trump voters and Clinton voters overwhelmingly agree it was a more negative campaign than previous elections (90% and 95%, respectively).

Large majorities of both Trump and Clinton voters say there was less discussion of issues than usual, though Clinton voters are more likely to say this (81% vs. 65%).

While most say there was far less discussion of issues, the vast majority of voters (81%) say that they learned enough about the candidates and issues to make an informed choice. The percentage who feels they learned enough to choose a candidate fell slightly from 2012 (87%) but is on par with other recent elections.

About six-in-ten voters (63%) said the presidential debates were very or somewhat helpful in deciding which candidate to vote for. This is similar to voters’ assessments of the debates usefulness in recent elections. 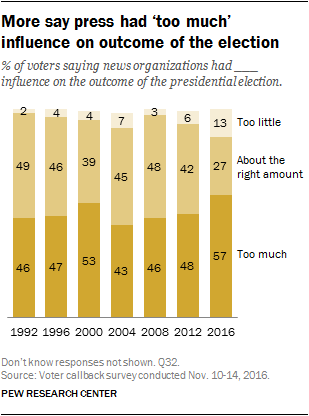 Fewer Trump voters (20%) than Clinton voters (34%) say news organizations had about the right amount of influence on the outcome of the election, while similarly small shares of each candidate’s voters said the press had too little influence (14% of Clinton voters, 13% of Trump voters).

Voters are critical of how the press treated the candidates 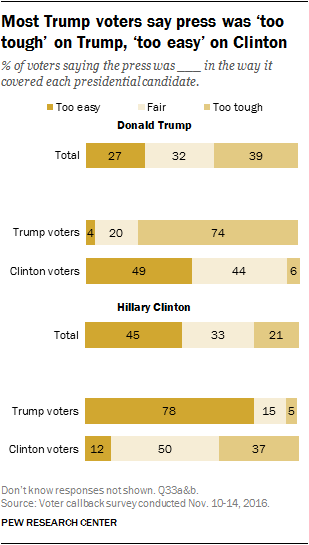 That the press is viewed by voters as having been easier on Clinton and harder on Trump is largely the result of higher levels of press criticism among Trump voters than Clinton voters: About three-quarters of Trump voters say both that the press was too tough on him (74%) and too easy on her (78%). By contrast, Clinton voters are roughly as likely to say the press treated Trump fairly as they are to say it was too easy on him (49% vs. 44%). And while 37% of Clinton voters say the press was too tough on their candidate, half (50%) say she was treated fairly.

Next: 4. The voting process
← Prev Page
Page1Page2Page3You are reading page4Page5Page6
Next Page →

Low Marks for Major Players in 2016 Election – Including the Winner 1. Presidential election reactions and expectations 2. Prospects for bipartisan cooperation, ideological direction of the parties
3. Voters’ evaluations of the campaign
Campaign grades 1988-2016Low satisfaction with voting choicesCampaign viewed as heavy on negative campaigning, light on issuesMost voters feel news media had too much influence on election outcomeVoters are critical of how the press treated the candidates
4. The voting process Methodology