Favorable views of the Supreme Court 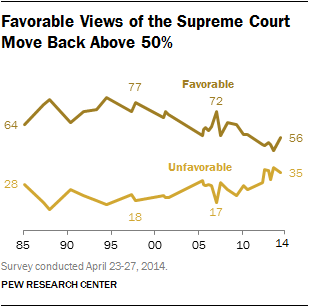 are back above 50%, having rebounded from historic lows reached in the summer of 2013. However, the court still has several major decisions pending that could impact the public’s views, including rulings on challenges to the Affordable Care Act’s requirement that employers include contraceptive coverage in their employees’ health plans.

The latest survey by the Pew Research Center, conducted April 23-27 among 1,501 adults, finds that 56% have a favorable view of the court, while 35% have an unfavorable view. (The survey was conducted before the court’s ruling that a town council in New York and, by extension, other legislatures, can begin meetings with a Christian prayer.) Last July, following high-profile rulings on the Voting Rights Act and same-sex marriage, about half held a favorable view of the court (48%), among the lowest measures recorded in Pew Research surveys. 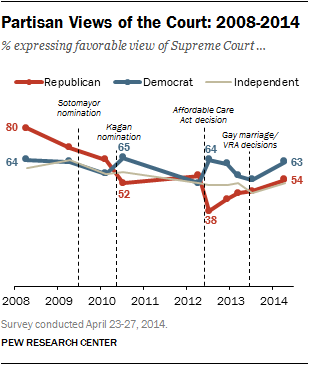 Currently, more Democrats (63%) than Republicans (54%) have a favorable impression of the Roberts court, though the gap has narrowed considerably since July 2012. At that time, shortly after the court upheld most of the provisions of the Affordable Care Act, 64% of Democrats viewed the court favorably compared with just 38% of Republicans. 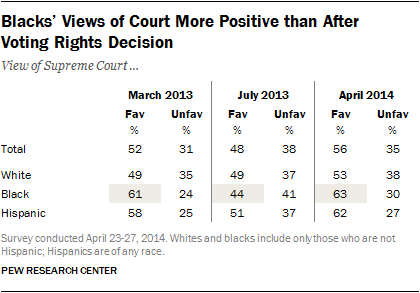 That survey was fielded shortly after the Supreme Court struck down the core elements of the Voting Rights Act of 1965, widely seen as a landmark piece of legislation enacted to prohibit discrimination in voting. Current views of the court among blacks are similar to those expressed in March 2013, before the Voting Rights Act ruling.

Views of the Court’s Ideology 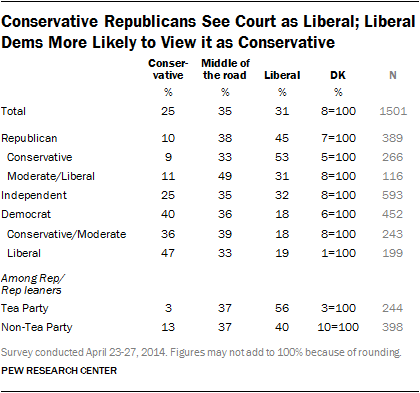 The public is divided when it comes to views of the Supreme Court’s ideology. About a third (35%) say that the court is middle of the road, while 31% call it liberal and 25% call it conservative. The percentage calling the court liberal has edged up five points since the summer of last year. In July 2013, about as many described the court as liberal (26%) as conservative (23%), while 42% called it middle of the road.