In the wake of the Supreme Court’s ruling upholding most of the 2010 health care law, the percentage of Americans expressing an unfavorable opinion of the court is at its highest point in more than 25 years. 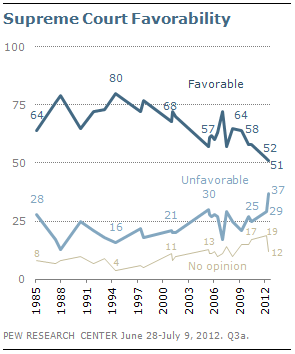 While there were virtually no partisan differences in views of the court three months ago, there is a sizable gap today. Nearly twice as

many Republicans as Democrats now view the court unfavorably (51% vs. 26%). In April, 25% of Republicans and 33% of Democrats had unfavorable opinions of the court. (For more, see “Supreme Court Favorability Reaches New Low,” May 1, 2012.) 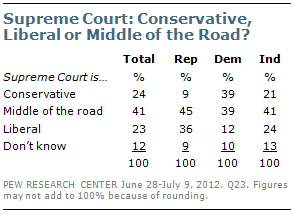 Republicans are more likely than Democrats to view the court’s ideology as liberal (36% vs. 12%). But the percentage of Republicans viewing the court as liberal is little changed from two years ago (34%). 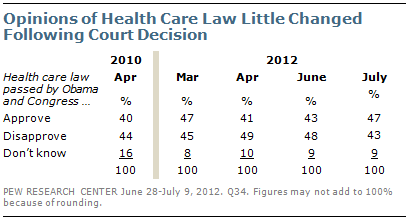 The court’s decision has had only a modest impact on the public’s views of the 2010 health care law. Currently, 47% approve of the law while 43% disapprove. In June, the balance of opinion was somewhat more negative than positive (43% approve, 48% disapprove). 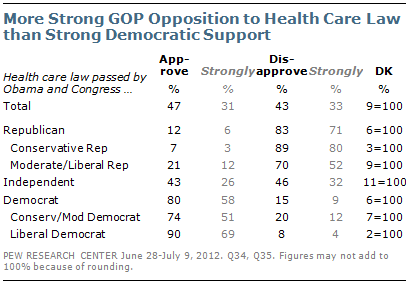 Currently, about as many strongly approve (31%) as strongly disapprove (33%) of the health care law. Last month, there was more strong disapproval than strong approval (35% vs. 26%). 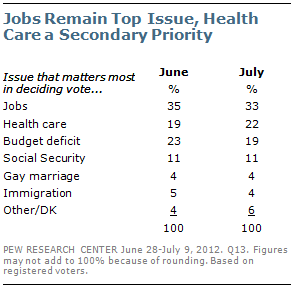 As was the case in June, jobs are the top issue for voters. Currently, 33% cite jobs as the issue that matters most in deciding their vote, little changed from last month (35%). The percentage citing health care as the top voting issue also is largely unchanged – 22% now, 19% then.

About as many voters cite the budget deficit (19%) as their top voting issue as cite health care. Smaller percentages say gay marriage and immigration will matter most in their vote (4% each).