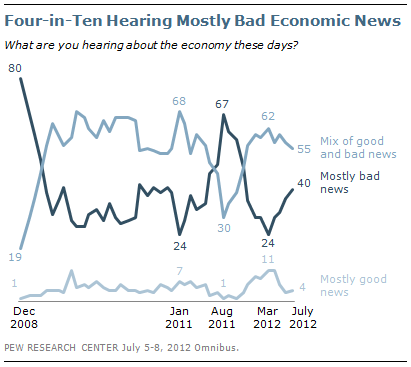 The public’s perceptions of the tone of news about the economy have changed little over the past month, but are far more negative than they were earlier this year.

Currently, 55% say they have been hearing a mix of good and bad news about the economy these days, while 40% say the news has been mostly bad. This is largely unchanged from a month ago (57% mixed, 37% mostly bad). Only small percentages have said they are hearing mostly good economic news (4% now, 3% in June). 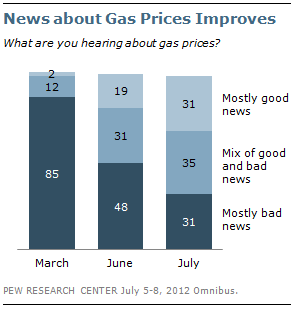 But things seem far better than last summer and fall. In August 2011 – shortly after the debt ceiling standoff in Washington – two-thirds (67%) said they were hearing mostly bad economic news. 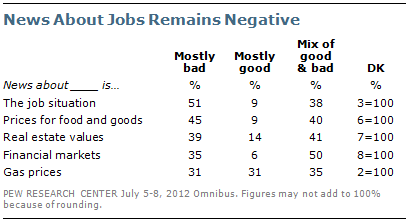 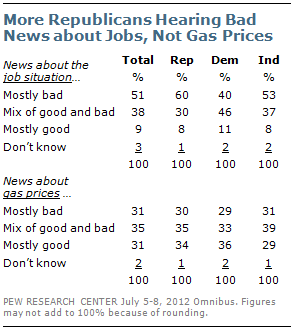 Looking at individual economic sectors, Republicans are much more likely than Democrats to say they are hearing mostly bad news about the jobs situation. Six-in-ten Republicans say this (60%), compared with 40% of Democrats. Just more than half of independents (53%) say this as well.

On the other hand, there are no significant partisan differences in perceptions of news about gas prices. About three-in-ten Republicans (30%), Democrats (29%) and independents (31%) say the news they have been hearing about gas prices has been mostly bad. Similar numbers in each group say recent news has been mostly good: 34% of Republicans say this, as do 36% of Democrats and 29% of independents.