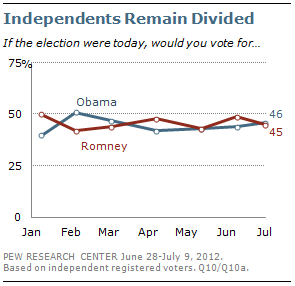 The general election contest between Obama and Romney has changed little over the past few months. Currently, 50% of registered voters support Obama or lean more toward him, while 43% back Romney or lean toward him. In June (June 7-17), Obama held a slight four-point edge (50% to 46%) and in May, Obama led 49% to 42%.

Similarly, the preferences of key groups of voters have remained fairly stable. Independents are evenly divided (46% Obama vs. 45% Romney), which is little changed from last month (49% Romney vs. 44% Obama). Obama continues to hold wide leads among blacks, Hispanics, women, college graduates and younger voters. Romney continues to hold a double-digit lead (currently 54% to 40%) among 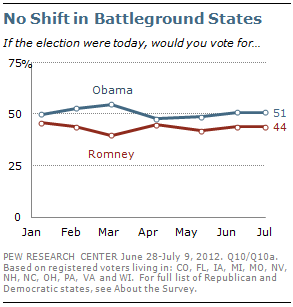 whites. As has been the case throughout this year, Romney’s advantage is particularly strong among working-class whites – he leads by a 58% to 35% margin among whites without a college degree, while white college graduates are divided (50% Obama, 47% Romney). (For trends in the race among selected demographic groups, see “Presidential Race Among Key Groups”).

Despite a steep increase in campaign advertising and other campaign activities in many key battleground states over the past month, there has been no shift in voter preferences. Currently, Obama holds a slim 51% to 44% margin among voters in 12 of the most competitive states. This is identical to the balance of support in these states in June. 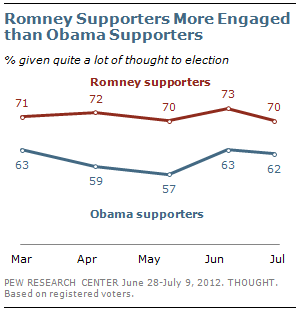 Romney continues to hold an engagement advantage over Obama in the presidential race. Currently, 70% of Romney voters say they have given quite a lot of thought to the election, compared with 62% of Obama supporters.

The GOP’s lead on voter engagement has held fairly steady over the past several months. Four years ago, by contrast, the Democrats either led or ran about even with the GOP on most engagement measures. In June 2008, 75% of Obama supporters and 73% of the supporters of John McCain said they had given quite a lot of thought to the election. (For more, see “GOP Holds Early Turnout Edge, But Little Enthusiasm for Romney,” June 21, 2012).

Views of Candidates and the Issues 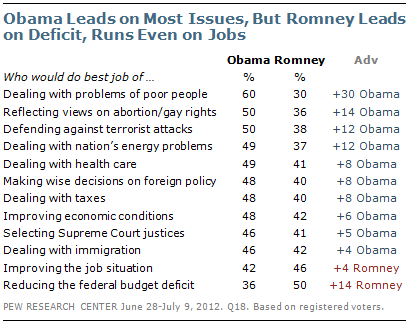 Obama holds wide leads over Romney on several issues, including dealing with the problems of the poor (by 30 points), reflecting people’s views on social issues like abortion and gay rights (14 points), defending against terrorist attacks (12 points) and dealing with the nation’s energy problems (12 points).

Voters’ evaluations are more divided on the issues that are at the top of their agenda – improving economic conditions and the job situation. And Romney leads by a wide margin as the candidate best able to reduce the federal budget deficit (50% Romney vs. 36% Obama). 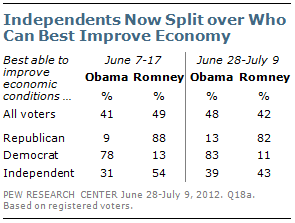 And while voters were evenly divided last month over whether Obama (45%) or Romney (44%) could best deal with health care, today Obama holds an eight-point lead on this issue (49% Obama vs. 41% Romney).

Obama runs stronger on foreign policy and national security against Romney than he did against John McCain in 2008. But he does worse on economic issues, especially reducing the budget deficit.

In 2008 Obama had a 15-point advantage over McCain as the candidate best able to improve the economy. His edge over Romney on this issue is just six points today. And on reducing the budget deficit, Obama’s wide 20-point lead over McCain in 2008 has disappeared and the budget deficit is now Romney’s strongest issue: He leads Obama as the candidate best able to deal with the deficit by a 50%-36% margin. However, Obama leads on dealing with taxes by about the same margin as he did over McCain four years ago (eight points now, 11 points then).

McCain led Obama as the candidate best able to defend the country from future terrorist attacks by 15 points in 2008. Today, Obama leads Romney by 12 points on dealing with the terrorist threat. And while Obama and McCain ran about even on making wise foreign policy decisions four years ago, Romney trails Obama by eight points in the current survey. 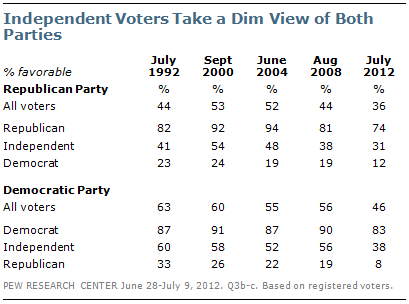 Next: Section 2: The Supreme  Court and Health Care
← Prev Page
Page1You are reading page2Page3Page4Page5
Next Page →

Obama Holds Lead; Romney Trails on Most Issues
Section 1: The 2012 Race, Issue Strengths, Views of the Parties
Romney Maintains Engagement AdvantageViews of Candidates and the Issues2012 vs. 2008Views of the Parties
Section 2: The Supreme  Court and Health Care Section 3: Perceptions of Economic News About the Surveys