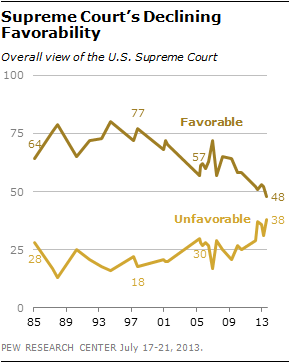 The Supreme Court’s favorability rating has edged below 50% for the first time in nearly three decades of Pew Research Center polling. Currently, 48% have a favorable opinion of the court while 38% have an unfavorable opinion.

In March, before the court’s end-of-term decisions on same-sex marriage and the Voting Rights Act, 52% had a favorable impression of the Supreme Court while 31% had an unfavorable opinion.

The national survey by the Pew Research Center, conducted July 17-21 among 1,480 adults nationwide, finds that African Americans’ views of the court have become much more negative in the aftermath of the court’s decisions.

In March, 61% of blacks viewed the court favorably while 24% had an unfavorable opinion.

Today, their opinions are divided (44% favorable vs. 41% unfavorable). This is among the lowest favorable ratings for the Supreme Court among blacks in polling dating to 1985. 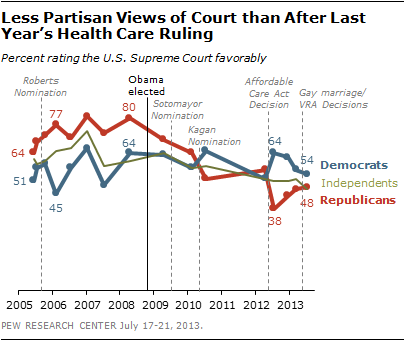 The survey finds that partisan differences in opinions about the Supreme Court – which widened substantially last year after the court’s ruling on the Affordable Care Act – have narrowed since then. Currently, 54% of Democrats, 48% of Republicans and 47% of independents express favorable opinions of the court. 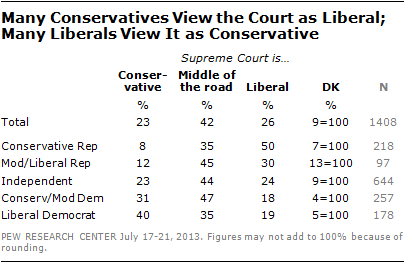 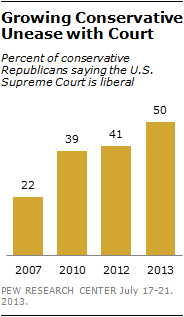 Democrats are far more likely to say the court is conservative (40%) than liberal (19%), with 35% saying it is middle of the road.

Nearly half of conservative and moderate Democrats (47%) say the court is middle of the road, as do 45% of moderate and liberal Republicans and 44% of independents.