As the Supreme Court prepares to hear arguments on two same-sex marriage cases, and with several other high-profile cases on its docket, the court’s favorability rating remains close to an all-time low.

A national survey by the Pew Research Center, conducted March 13-17 among 1,501 adults, finds that 52% view the court favorably, while 31% view it unfavorably. Those ratings have changed only modestly since last July, shortly after the court’s ruling to uphold most of the Affordable Care Act.

Republicans’ views of the court, which tumbled 18 points following the court’s ruling on the health care law, have rebounded somewhat in the current survey. Nearly half of Republicans (47%) have a favorable opinion of the Supreme Court, up from 38% last July, but still lower than the 56% who viewed the court positively prior to its decision on the health care law.

The public continues to have mixed perceptions of the Supreme Court’s ideology. A plurality (40%) now say the court is middle of the road, while 24% say it is liberal and about the same share (22%) says it is conservative. 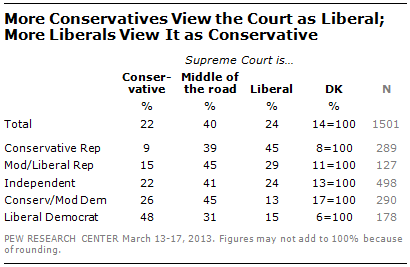