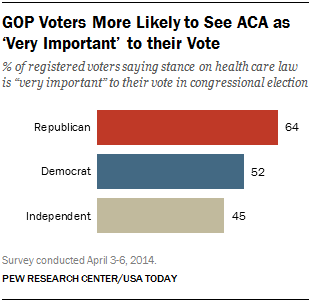 In looking ahead to this fall’s elections, Republicans are more likely than Democrats to view a candidate’s position on the Affordable Care Act as very important to their vote. A new national survey finds that 64% of Republican registered voters say a candidate’s stance on the health care law will be very important in their voting decision, compared with 52% of Democrats and 45% of independents.

The new national survey by the Pew Research Center and USA TODAY, conducted April 3-6 among 1,010 adults, finds more continue to disapprove (50%) than approve (37%) of the 2010 health care law. Last month, the balance of opinion was similar – 53% disapproved of the law, while 41% approved.

Opinion about the 2010 health care law, as well as its views of its current and future impact, remains deeply divided along partisan lines. By roughly eight-to-one (83% to 10%), Republicans disapprove of the law while Democrats, by a less lopsided margin (73% to 16%) approve of it. Only about a third of independents (34%) approve of the law while 54% disapprove. Opinions across partisan groups are little changed from last month. 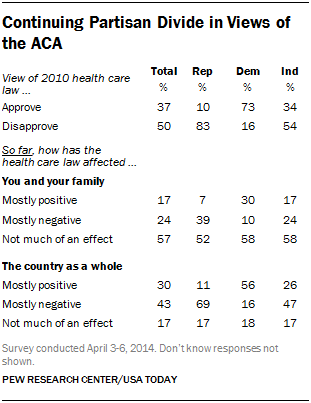 A majority of Americans (57%) say the health care law has not had much of an effect on themselves and their families, though somewhat fewer say that today than did so last September (63%). About a quarter (24%) say the law’s impact has been mostly negative while 17% say it has been mostly positive.

The public’s assessments of the law’s future impact also remain more negative than positive. Currently, 35% say in coming years the law will have a mostly negative effect on them and their families, 29% expect the effect will be mostly positive, while 30% say the law will not have much of an effect.

Comparable percentages of Democrats (58%) independents (58%) and Republicans (52%) say the law has not yet had much of an effect on them or their families. But most Republicans (61%) expect the law will have a mostly negative personal impact; by contrast, 55% of Democrats think the law’s impact will be mostly positive. Independents have mixed expectations about the law’s effects – 34% say it will be mostly negative, 28% say mostly positive and 31% think it won’t have much of an effect. 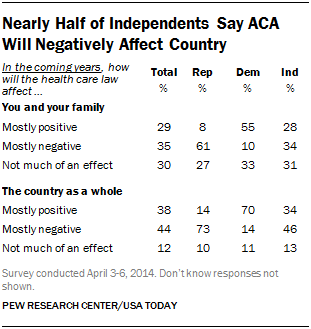 While independents are divided over the law’s potential personal impact, more say it will have a mostly negative (46%) than a mostly positive (34%) effect on the country.