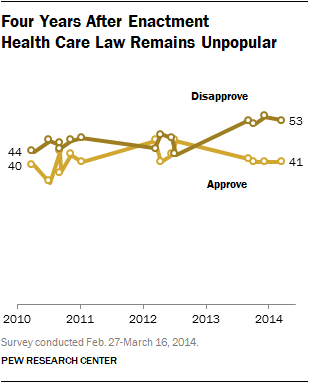 As the four-year anniversary of the Affordable Care Act approaches, the law remains unpopular with the public. Currently, 53% disapprove of the 2010 health care law while 41% approve of the law. Opinion of the measure is virtually unchanged since last September.

However, the new national survey by the Pew Research Center, conducted Feb. 27-March 16 among 3,335 adults, finds that when opponents of the health care law are asked about the law’s future, more want elected officials to try to make it work than to make it fail.

A majority of ACA opponents – representing 30% of the public overall – want politicians to do what they can to make the law work as well as possible, compared with 19% of the public that wants elected officials to do what they can to make it fail. These opinions are little changed from December, but in the September poll opponents were more evenly divided over how they wanted elected officials to deal with the law. 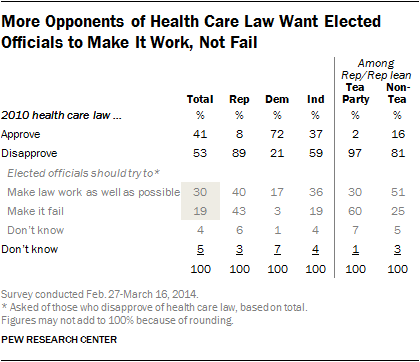 There continue to be deep partisan differences over the Affordable Care Act – 72% of Democrats approve of law compared with 37% of independents and just 8% of Republicans.

The 2010 health care law is politically divisive, but the differences go well beyond party affiliation. Views of the law continue to vary widely across racial and ethnic groups. By nearly two-to-one (62%-33%) more whites disapprove than approve of the law. By contrast, 77% of blacks approve of the law, while just 18% disapprove.

Hispanics are evenly divided: 47% approve of the law, while 47% disapprove. Over most of the past four years, Hispanics have offered more support than opposition for the health care law. As recently as September, 2013, 61% of Hispanics approved of the law. Support for the ACA among Hispanics fell sharply in October of 2013 (to 47%) and has yet to recover.

People younger than 30 do not view the law as negatively as do older Americans. About as many young people approve (50%) as disapprove (47%) of the health care law. Among older age groups, majorities disapprove. That marks a change from December, when younger people had about the same view of the health care law as older adults. (This survey was included as part of the “Millennials in Adulthood” report, released March 7).

Those with family incomes of $30,000 a year or less are as likely to approve (45%) as disapprove (47%) of the health care law. By contrast, majorities of those in more affluent households disapprove of the law. 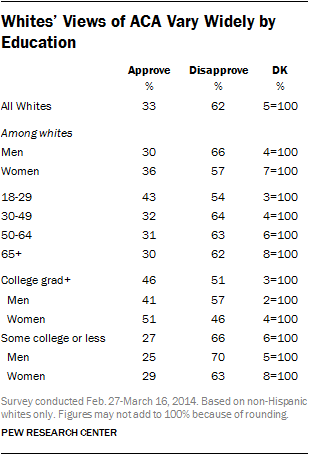 Overall, whites disapprove of the 2010 health care law by roughly two-one-one (62% disapprove, 33% approve). However, there are differences in views of the ACA between whites who have graduated from college and those who have not.

Whites without a college degree disapprove of the health care law by a lopsided 66%-27% margin. By contrast, white college graduates are much more divided (51% disapprove, 46% approve), and among white women with college degrees, slightly more approve than disapprove (51% vs. 46%). White college men oppose the ACA, 57%-41%.

Across age groups, whites under 30 are somewhat more supportive of the health care law than older whites. However, even among those 18-29, more disapprove (54%) than approve (43%) of the ACA. 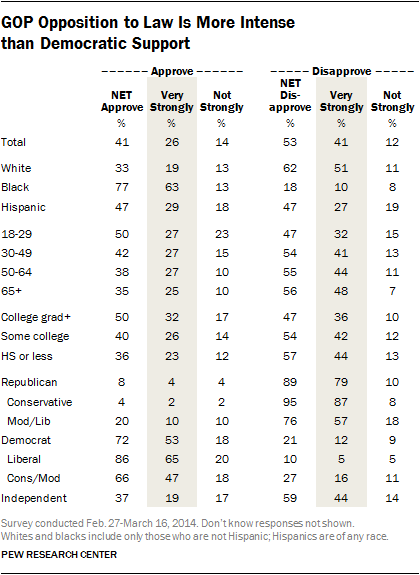 As was the case in September, there is substantially more strong opposition than support for the health care law. Overall, 77% of those who disapprove say they feel this way very strongly (41% of public); 64% of approvers hold this view very strongly (26% of the public).

Across most demographic groups, strong opposition to the law is greater than strong support. Moreover, while 79% of Republicans strongly disapprove of the law, a much smaller share of Democrats (53%) strongly approves of it.

Among young people – who split on the law generally (50% approve, 47% disapprove) – about twice as many say they strongly disapprove (32%) as say they disapprove not so strongly (15%); among approvers, roughly equal shares hold this view strongly (27%) as not strongly (23%). 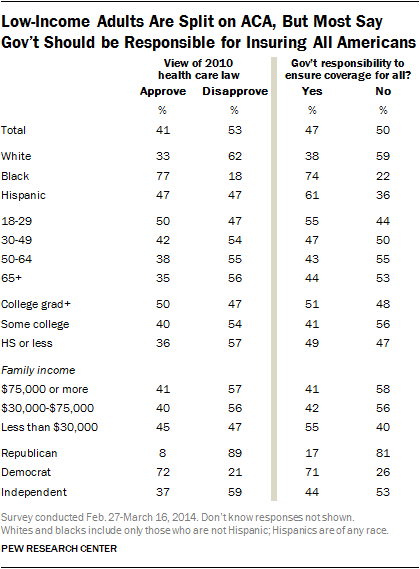 For the most part, demographic differences on this question follow similar patterns as those in views of the 2010 health care law. Yet there are some notable differences. Hispanics are divided over the health care law, but most (61%) say it is the government’s responsibility to make sure all Americans have health coverage. 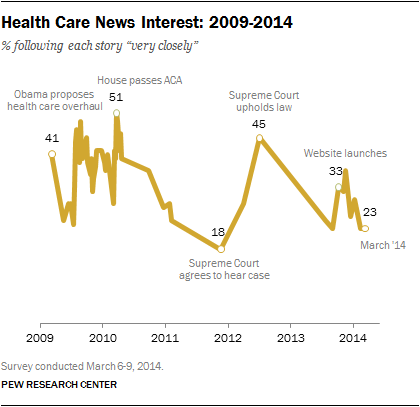 In early March 2009, 41% paid very close attention to Obama’s initial proposal for a $630 billion fund to overhaul health care. Interest was sustained throughout the second half of 2009 and into 2010, peaking at 51% around the time of the House passage of the bill.

Interest declined after Obama signed the bill into law, but rebounded in the summer of 2012 when the Supreme Court issued a ruling on the law; in June 2012, 45% tracked news about the Court’s ruling on the health care law very closely.

Obama Job Rating Regains Some Ground, But 2013 Has Taken a Toll
As Health Care Law Proceeds, Opposition and Uncertainty Persist
Public Remains Split on Health Care Bill, Opposed to Mandate
So far, Trump has granted clemency less frequently than any president in modern history
Biden Begins Presidency With Positive Ratings; Trump Departs With Lowest-Ever Job Mark
Quiz: Where do you fit in the political typology?
Almost all U.S. presidents, including Trump, have been Christians
How we know the drop in Trump’s approval rating in January reflected a real shift in public opinion