As a key step in the implementation of the Affordable Care Act approaches, public views of the 2010 health care law are as negative as ever, and many are unaware of the elements of the law that will be going into place. While opposition to the law runs deep, critics are divided over whether the effort should be to make the law work as well as possible or to make it fail. 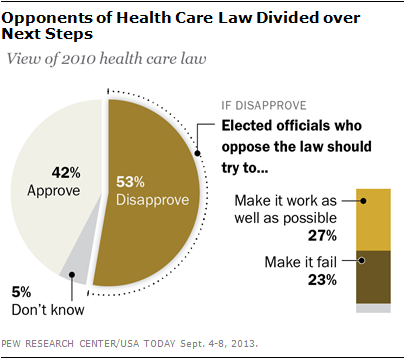 With health insurance exchanges set to open on Oct. 1, the latest national survey by the Pew Research Center and USA TODAY, conducted Sept. 4-8 among 1,506 adults, finds that 53% of Americans disapprove of the law while 42% approve. Overall approval of the Affordable Care Act (ACA) ticked up last July in the wake of the Supreme Court’s decision to uphold most of the law (47% approved, 43% disapproved), but opinions are now as negative as they have been any point since the bill’s passage. 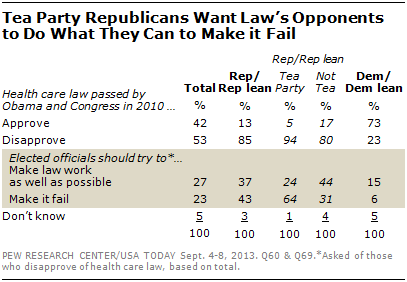 However, 64% of Tea Party Republicans oppose the law and want elected officials to do what they can to make it fail. By comparison, just 31% of Republicans and Republican leaners who do not agree with the Tea Party favor this approach. 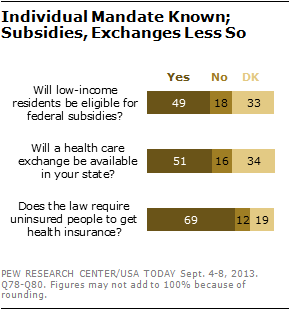 Public awareness of specific components of the law varies widely. About seven-in-ten (69%) say that the law requires uninsured people to get health insurance.

But with health exchanges scheduled to open next month in all 50 states and Washington, D.C., only about half of the public (51%) says that a health insurance exchange will be available to people in their state. About as many (49%) say that lower-income people in their states will be eligible for federal subsidies. 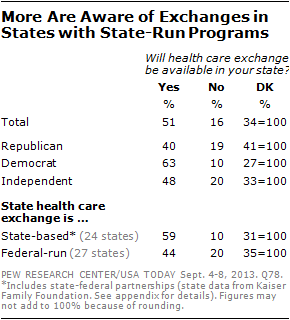 Most Have Not Yet Felt Law’s Impact

About six-in-ten (63%) Americans have yet to see much of an impact from the health care law on themselves or their family. Looking ahead to the coming years, more anticipate negative personal effects: 41% say the effect on themselves and their family will be negative (25% say it will be positive). 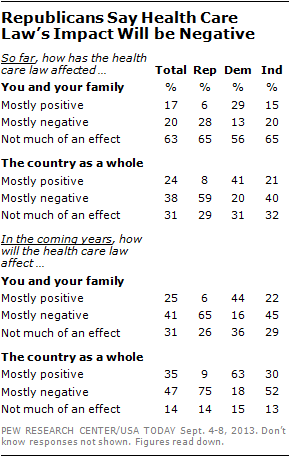 When it comes to the long-term impact of the law, a plurality of Democrats (44%) say the law will have a positive effect on them and their families, while 65% of Republicans and 45% of independents think the law will negatively affect them.

Three-quarters (75%) of Republicans think the law will negatively affect the country in the coming years, while 63% of Democrats think its impact will be positive. Although more divided in their predictions, more independents say the law’s impact will be negative than positive (52% vs. 30%).

Tepid Support for the Affordable Care Act from the Uninsured 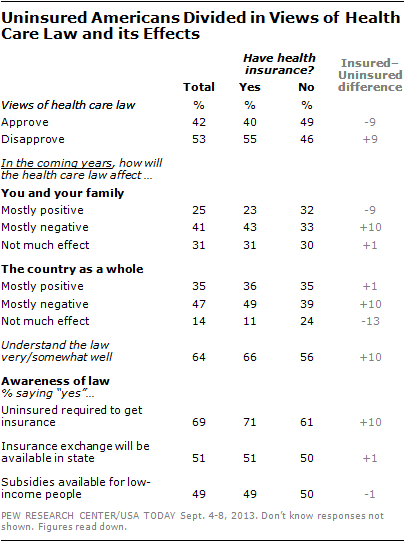 Uninsured Americans – 19% of those in the current survey –are somewhat more supportive of the health care law, and more likely to view the effects of the Affordable Care Act positively, than those who are currently covered by health insurance. 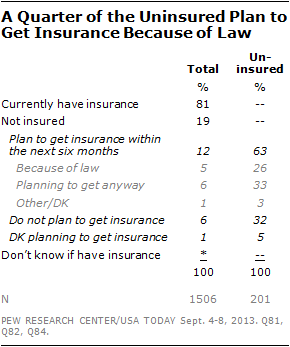 to purchase insurance; they are no more likely to be aware of this than are people with health insurance (49%).

Currently, 53% disapprove of the health care law, while 42% approve. This is among the most negative assessments of the law since it was enacted in March 2010. In July 2012, shortly after the Supreme Court upheld most of the provisions of the Affordable Care Act, 47% approved of the legislation and 43% disapproved. 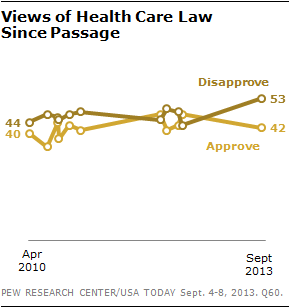 The current survey finds more intense opposition than support for the health care law. While 41% strongly disapprove of the law, only about a quarter (26%) strongly approve.

Overall opinion about the health care law has fluctuated in recent years, yet the patterns of opposition and support across demographic and partisan groups have remained fairly steady since the legislation was first being debated in Congress.

For instance, just 12% of Republicans favored the health care measures before Congress in July 2009, as town hall protests galvanized opposition to the proposals; currently 11% of Republicans approve of the health care law. Democratic support has increased 14 points since then, from 61% to 75%. But there has been little change in Democrats’ views of the law since shortly after it was enacted in 2010 (74% approved in September 2010).

Independents have been critical of the health care proposal, but the current measure is quite negative. Just 36% of independents approve of the law, while 58% disapprove.

Wide racial and ethnic gaps over health care proposals also have long persisted. However, blacks are much more supportive of the law today (91% approve) than when it was being debated in 2009 (50%).

Whites have consistently opposed the Affordable Care Act. In September 2010, 33% approved of the law and 56% disapproved. Today, just 29% approve and more than twice as many disapprove (67%).

Neither Party Has Advantage in Handling Health Care 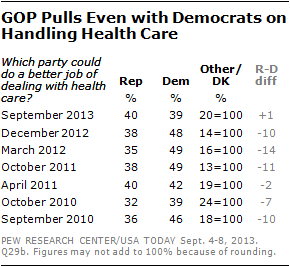 This is the best relative showing for Republicans since April 2011 on an issue that has traditionally been an advantage for the Democratic Party. As recently as last December, Democrats were seen as the party better able to deal with health care by a 48%-38% margin.

What People Know about the Health Care Law

Awareness of three of the key components of the health care law (the individual mandate, state health insurance exchanges and federal subsidies for low-income Americans) varies across subgroups of the population. 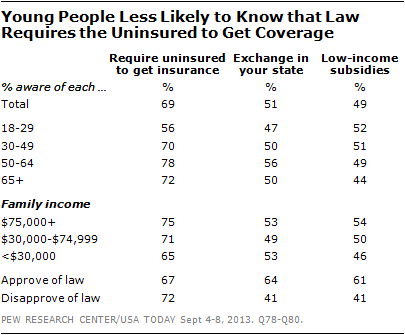 For instance, although young people are somewhat less likely to be insured than older people, just 56% of those younger than 30 are aware of the requirement that uninsured people get health insurance. That compares with 73% of those 30 and older.

Young people are about as likely as other age groups to be aware of the availability of health care exchanges and federal subsidies for low-income people in their state.

As Health Care Law Proceeds, Opposition and Uncertainty Persist
Survey ReportMost Have Not Yet Felt Law’s ImpactTepid Support for the Affordable Care Act from the UninsuredOpinions of Health Care Law Turn More NegativeNeither Party Has Advantage in Handling Health CareWhat People Know about the Health Care LawAppendix: Health Insurance Exchanges by StateSurvey Highlights
About the Survey