A few weeks after the launch of the state-level online health insurance exchanges that are a cornerstone of the Affordable Care Act, the public’s impression is that it has been a bumpy 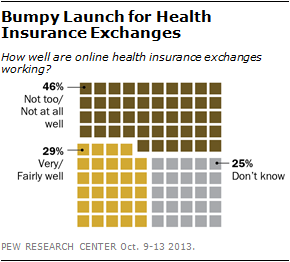 launch. About three-in-ten Americans (29%) say the online health insurance exchanges are working very or fairly well while 46% say they are not.

The national survey by the Pew Research Center, conducted Oct. 9-13 among 1,504 adults, finds that awareness of the exchanges has increased significantly over the past month. In early September, barely half (51%) knew that exchanges were going to be available in their state; that has risen to nearly two-thirds (65%) today. 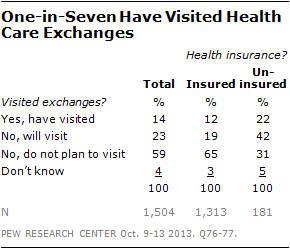 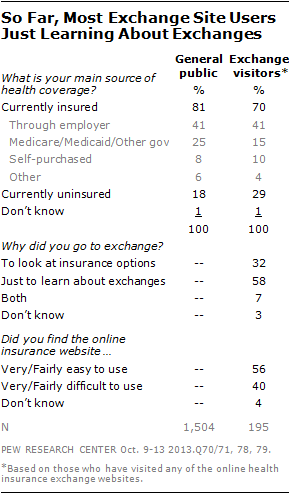 So far, most of the visitors to the exchange websites are people who have insurance: 41% of exchange visitors have employer-provided insurance, and another 15% are covered by Medicare, Medicaid or another government program. Some 10% of exchange visitors are self-insured, and 29% of visitors are uninsured. Most (58%) who have visited the sites say they went just to learn more about the exchanges, while 32% say they were looking for health care options for themselves or their families.

Despite offering critical evaluations of how well the exchanges are working, many of the sites’ actual visitors report that they did not face significant problems. Among those who have visited an exchange website, more say the exchanges overall are not working well by a 56%-37% margin. Yet when asked about their own experience on an exchange website, a 56% majority say they personally found the site to be very or fairly easy to use, while 40% say it was difficult to use. 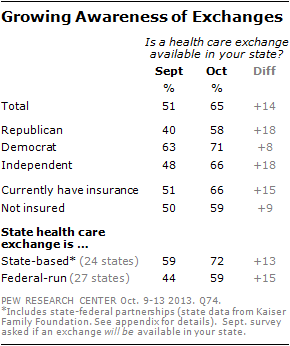 Increased awareness is evident across-the-board, though a substantial party gap persists. Today 71% of Democrats say an exchange is available in their state, compared with 58% of Republicans.

Awareness of the exchanges remains significantly lower in states that have decided against state involvement in the exchanges and that, as a result, have exchanges that are being run by the federal government. In the 27 states that have federally-run programs, 59% are aware that an exchange is available in their state. In the 24 states (including D.C.) with state-based health care exchanges or state-federal partnerships, 72% are aware than an exchange is available. 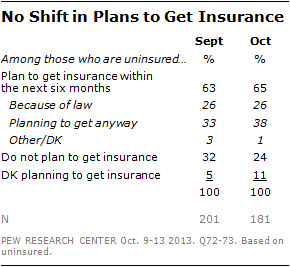 Among uninsured Americans, 59% now say an exchange is available in their state, up from 50% a month ago. Yet there is no shift in the share of uninsured who say they plan to get insurance because of the new law that requires individuals to sign up by the end of the year.

Most uninsured Americans (65%) say they plan to get health insurance over the course of the next six months, but just 26% say this is because of the new health care law while 38% say they had planned to get insurance anyway. These proportions are little changed from last month.

But views of the exchanges vary across groups. Young people and those with annual household incomes of less than $30,ooo are divided in their evaluations of the exchanges, while the assessments of older and more affluent Americans are more negative.

By about two-to-one, whites have a more negative (52%) than positive (24%) impression of the health insurance exchanges. Black opinions are considerably more positive: 51% say the exchanges are working well, while just a quarter (25%) say they are not.

And while a plurality of Democrats (44%) say the exchanges are working well, that compares with just 25% of independents and only 14% of Republicans.

And although those who have visited the exchanges are more likely to provide an evaluation for how well they are working, the balance of opinion among this group is little different than among the overall public. Even though most report that they found the exchanges easy to use, by a 56% to 37% margin exchange users say the overall program is not working well. 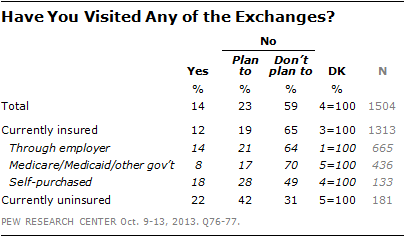 Among insured Americans, those who purchase their own health insurance individually are more interested in the exchanges than those who have insurance through an employer or the government. Among the self-insured, who represent 8% of all respondents, 46% either have already visited (18%) or plan to visit (28%) the exchanges. This compares to 35% of people who have employer-provided health insurance and just 25% of those who receive coverage through a government program such as Medicare or Medicaid. 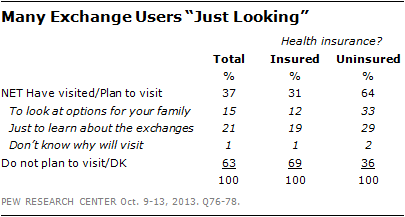 But even among the uninsured who plan to visit the sites, many are not yet seriously thinking of the exchanges as a health insurance option. While 64% of uninsured Americans either have visited or plan to visit an exchange website, only 33% say they are looking at health insurance options for themselves and their families. Nearly as many (29%) say they have visited or plan to visit the sites but only to learn about the exchanges, not to look at options for themselves.

No Change in Views of the ACA

Public assessments of the 2010 health care law are virtually unchanged from last month. Currently, 41% of Americans approve of the law, while 52% disapprove. The balance was 42% to 53% a month ago. The survey, was conducted in the midst of the government shutdown, which was prompted in part by opposition to the Affordable Care Act (ACA).