Abortion has emerged as an issue in the 2012 presidential race, following Missouri GOP Senate candidate Todd Akin’s controversial comments about abortion and “legitimate rape.” In recent years, narrow majorities of the public have consistently said that abortion should be legal in all or most cases. The Democratic Party is widely favored over the GOP on the issue of abortion. At the same time, however, abortion is viewed as a much more important issue by voters opposed to legal abortion than by its supporters. 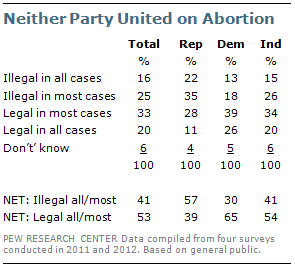 There is no consensus among Democrats either: 26% say abortion should be legal in all cases and 39% in most cases. 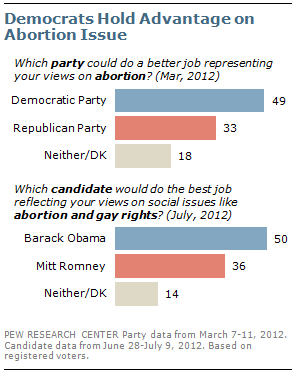 Women and Abortion. There are only modest gender differences in opinions about legal abortion. But women are much more likely than men to favor the Democrats and Obama on this issue. Women voters also place greater importance on this issue than do men.

Narrow majorities of both women (55%) and men (51%) say that abortions should be legal in all or most cases.

However, women voters favor the Democrats on abortion by 52% to 32%. And Obama’s lead over Romney is about as large on social issues like abortion and gay rights (53% to 32%). Men side with the Democrats and Obama by 10 points and six points, respectively. 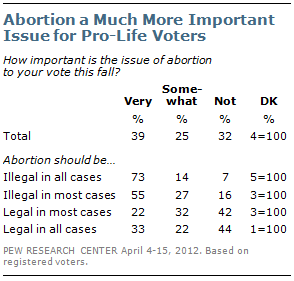 By contrast, just a third of those who favor legal abortion in all cases, and just 22% who say it should be legal in most cases, rate abortion as very important to their vote. About four-in-ten voters in each group (44% legal in all cases, 42% legal in most) say abortion will be not at all important in their decision about whom to vote for.