About half (49%) now have a favorable opinion of the Democratic Party, up from 43% in January. This represents a significant recovery from an all-time low favorability rating of 38% in April 2010, just after the passage of the health care bill. However, impressions of the Democratic Party are still far lower than they were in January 2009 as Obama was taking office, when 62% viewed the party favorably.

Views of the Republican Party continue to be negative – just 36% have a positive impression of the GOP while 56% have an unfavorable opinion. This is little changed from earlier this year and matches the equally low ratings the GOP received in April 2010 (37%). 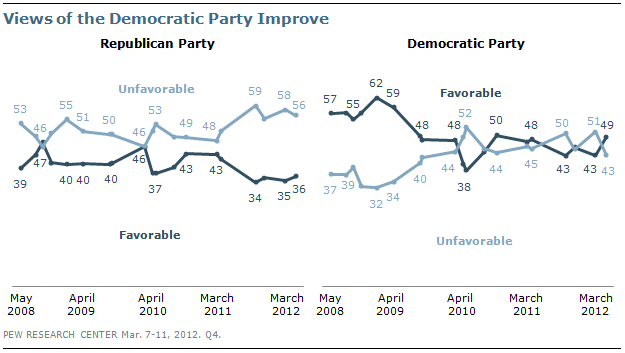 A majority of women (54%) now have a favorable opinion of the Democratic Party, up eight points over the last two months, while 40% have an unfavorable impression. Women’s views of the Republican Party are far more negative – 38% have a favorable opinion while 56% have an unfavorable one; these opinions are little changed from January. Throughout the past four years, with the exception of the spring and summer of 2010, women have viewed the Democratic Party more favorably than the GOP. 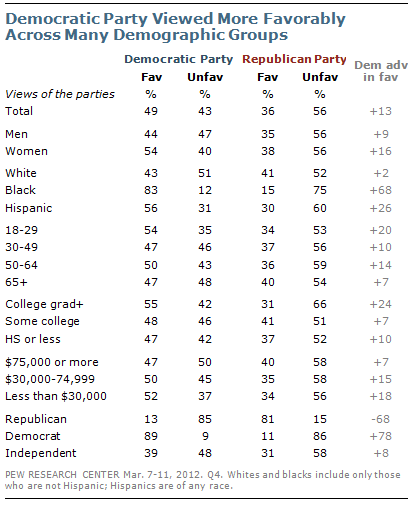 The Democratic Party has opened a slim 44% to 39% advantage as the party better able to improve the job situation, which remains the public’s top economic concern. Over the past year, the parties have been tied on this issue. Democrats also now run even with Republicans on who can better deal with the federal budget deficit (42% Republicans, 41% Democrats). In October, Republicans had a nine-point lead on this issue.

On health care and energy, Democrats lead the Republican Party; 46% say the Democratic Party can better handle the nation’s energy problem while 35% choose the Republican Party. By a 49% to 35% margin, more say the Democratic Party can better deal with health care; Democrats have a similar advantage on dealing with the Medicare system. 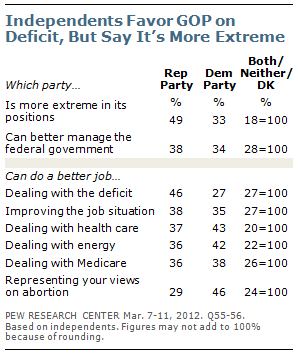 Among independents, about as many say the Democratic Party can handle most issues as say the Republican Party. The parties run even among independents on who can better manage the federal government and on nearly all issues tested, including improving the job situation, dealing with health care and the Medicare system and handling the nation’s energy problems.

Next: Section 5: Views of the National Economy
← Prev Page
Page1Page2Page3Page4You are reading page5Page6Page7Page8
Next Page →