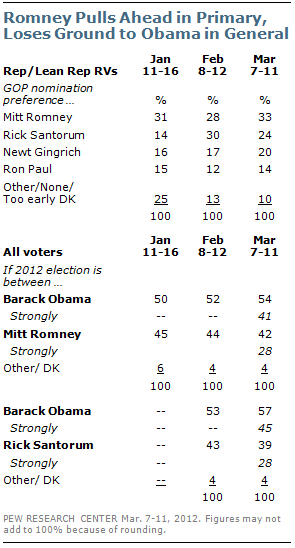 Mitt Romney has retaken a significant lead nationally in the race for the Republican presidential nomination, even as he has fallen further behind Barack Obama in a general election matchup. Moreover, Obama’s own job approval rating has reached 50% for the first time since last May, shortly after the killing of Osama bin Laden.

The latest national survey by the Pew Research Center for the People & the Press, conducted March 7-11 among 1,503 adults, including 1,188 registered voters and 538 Republican and Republican-leaning voters, finds that Romney leads Rick Santorum, 33% to 24%, in the GOP nomination contest. A month ago, the two men were in a virtual tie (28% Romney, 30% Santorum).

But both GOP frontrunners are running well behind Barack Obama in general election matchups. Among all voters, Obama leads Romney by 12 points (54% to 42%) and Santorum by 18 points (57% to 39%). Obama’s advantage among women voters, while largely unchanged from a month ago, remains substantial – 20 points over Romney and 26 points over Santorum.

Obama also holds an enthusiasm advantage over both of his main GOP rivals. In a matchup with Romney, 41% say they support Obama strongly, compared with only 28% who strongly support the former Massachusetts governor. Obama holds a commanding 45% to 28% lead over Santorum in strong support.

Republicans have a modest lead in engagement; 71% of Republican and Republican-leaning voters say they have given quite a lot of thought to the presidential election, compared with 64% of Democratic and Democratic-leaning voters. However, this is far short of the engagement advantage the GOP held in pre-election polls in the 2010 midterm campaign. 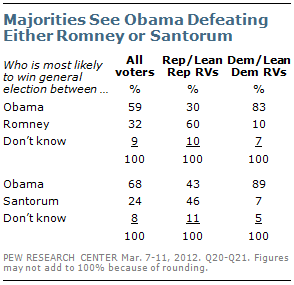 While overwhelming majorities of Democratic and Democratic-leaning voters think that Obama will win against Romney or Santorum, Republicans are far less confident in their parties’ candidates. Just 60% of Republican and Republican-leaning voters say Romney is likely to defeat Obama. In an Obama-Santorum matchup, even fewer GOP voters (46%) predict victory; about as many expect Obama to best Santorum (43%). 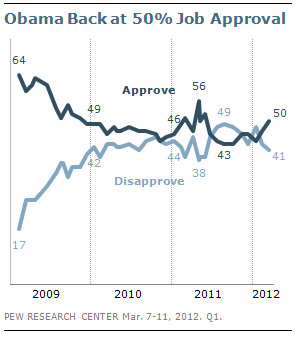 The poll includes other positive signs for Obama, as well some potential vulnerabilities. For the first time since last May, significantly more approve (50%) than disapprove (41%) of his overall job performance. That is little changed from a month ago (47% approve, 43% disapprove), but in January 44% approved of the way Obama is handling his job as president, while 48% disapproved.

Obama’s approval rating for handling the economy also has improved over the past several months. Currently, 43% approve of his handling of the economy, while 53% disapprove. In November, 35% gave him positive marks on the economy and 58% disapproved. 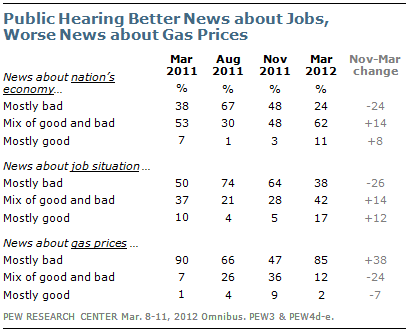 The public’s view of overall economic news – as well as news about the job situation – has shown decided improvement since last summer. Yet perceptions of news about gas prices have taken a sharp turn for the worse.

Fully 85% say the news they are hearing about gas prices is mostly bad, which is up from 47% last November. In contrast, the percentage saying they are hearing mostly bad news about the job situation has fallen 26 points since November – from 64% to 38% – and stands at one of its lowest points in a measure dating back nearly three years. 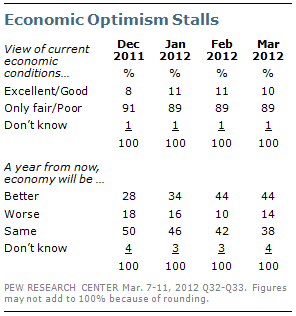 The mixed perceptions of economic news have had little effect on underlying opinions about the state of the economy. The public’s rating of current economic conditions remains stubbornly negative. Nearly nine-in-ten (89%) say economic conditions are only fair or poor, a figure that has changed little over the last four years.

Economic optimism increased sharply between December and February and is unchanged since last month. Currently, 44% say they expect economic conditions in the country to be better a year from now, 14% say conditions will be worse and 38% say they will be the same.

Obama’s personal image remains much more favorable than either Romney’s or Santorum’s. Currently, 56% of Americans say they have a favorable impression of Obama while 41% have an unfavorable view. 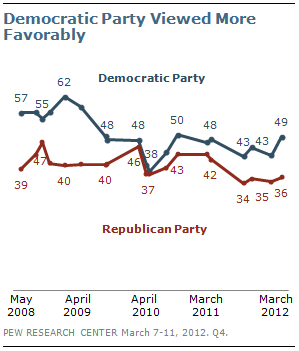 Moreover, while the Democratic Party is viewed more favorably than it was a few months ago, the Republican Party’s image is little changed – and remains much more negative than positive. Just 36% have a favorable opinion of the GOP, compared with 56% who have an unfavorable opinion. That is largely unchanged from January (35% favorable vs. 58% unfavorable).

The Democratic Party has opened a slim 44% to 39% advantage as the party better able to improve the job situation. The Democrats also are viewed as better able to represent people’s views on abortion (by 16 points), and to deal with health care (14 points), Medicare (13 points) and the nation’s energy problems (11 points).The two parties run about even on dealing with the federal budget deficit (41% Democrats, 42% Republicans).

The survey also finds that, two years after the passage of comprehensive health care legislation, the public is evenly divided over the law. Overall, 47% approve of the law, while 45% disapprove. In January 2011, 41% approved and 48% disapproved. 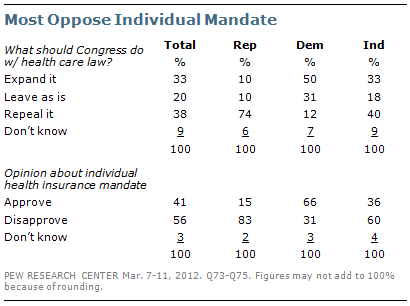 However, substantially more disapprove (56%) than approve (41%) of a key provision in the law that requires individuals to have health insurance by 2014 or pay a penalty. This provision is at the heart of a constitutional challenge to the law, which will be heard before the U.S. Supreme Court in late March.

Next: Section 1: The GOP Primary
← Prev Page
You are reading page1Page2Page3Page4Page5Page6Page7Page8
Next Page →