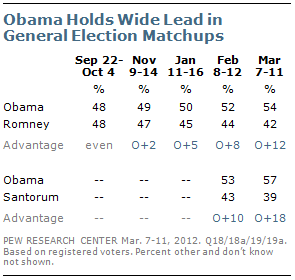 With rising job approval and favorability ratings, Barack Obama also holds a growing advantage in voter preferences as they look toward November. Among registered voters, he currently leads Mitt Romney by 12 points and Rick Santorum by 18 points.

The difference between Romney and Santorum at the head of the GOP ticket mainly affects independents. While independent voters are divided in a race between Obama and Romney (47% vs. 43%), they would favor Obama by a 53% to 39% margin if Santorum is his opponent. 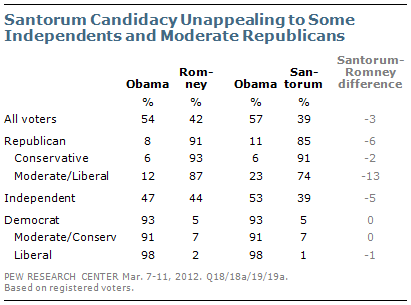 Some moderate and liberal Republican voters would also balk if Santorum becomes the nominee; 23% say they would vote for Obama, compared with 12% who would favor Obama over Romney.

Barack Obama’s lead over Romney is attributable in large part to his wide advantage among women, younger voters, and nonwhites. Women favor Obama over Romney by 20 points – virtually unchanged from a month ago – while men are divided almost evenly (49% Obama, 46% Romney). This gender gap is particularly wide among voters under age 50. Women ages 18-49 favor Obama over Romney by nearly two-to-one (64% to 33%), while men the same age are split (50% Obama, 46% Romney). 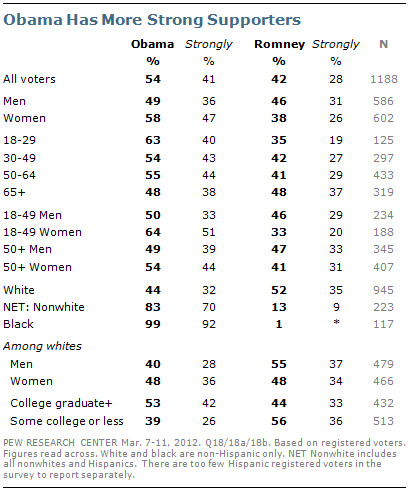 Non-Hispanic whites – who make up roughly three-quarters of the registered voters surveyed – favor Romney over Obama by a 52% to 44% margin. Meanwhile, nonwhites back Obama by 83% to 13%, including 99% of African Americans who support Obama for reelection.

Education remains a substantial divide among white voters; 53% of white college graduates back Obama over Romney, compared with 39% of those without a college degree.

Among women, not only do 58% favor Obama, but 47% back him strongly, meaning that more women support Obama strongly than support Romney strongly or moderately (38%). 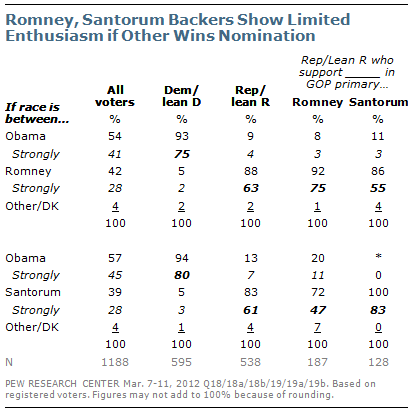 As voters look toward the fall election, Democrats express more enthusiasm for Obama than Republicans do for either of their party’s leading candidates. To be sure, however, this reflects the internal divisions within the party over who would be the best nominee, with each candidate receiving tepid support from those who would prefer to see the other candidate win.

If Santorum is the GOP nominee, 80% of Democratic voters say they would support Obama strongly, compared with 61% strongly backing Santorum among Republican voters.

Most Predict Obama Victories in the Fall 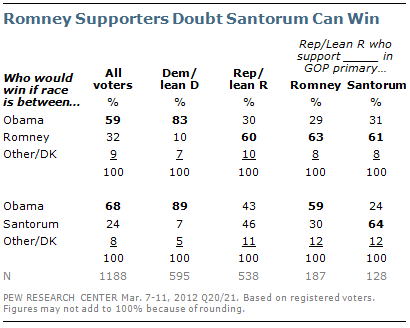 By a 59% to 32% margin, most Americans think Barack Obama will win the election if Mitt Romney is the Republican nominee. That margin far wider if Rick Santorum is the GOP nominee: 68% think Obama would win, just 24% Santorum.

Confidence among Democratic voters is high regardless of the outcome of the GOP primary – 83% of Democrats and Democratic leaners expect Obama to prevail over Romney, 89% believe he would win over Santorum.

Views of Obama, Romney and Santorum 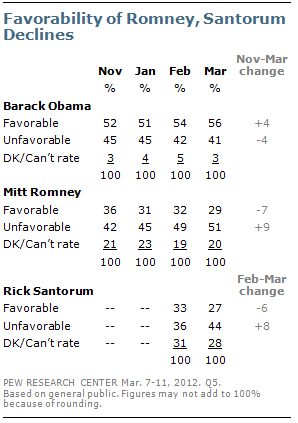 More than half of the public (56%) holds a favorable view of Obama, while 41% have an unfavorable view of the president. This is largely unchanged from last month, but reflects a modest improvement from the start of the year. Impressions of Republican candidates Mitt Romney and Rick Santorum are much more negative, and have grown more negative in recent months. 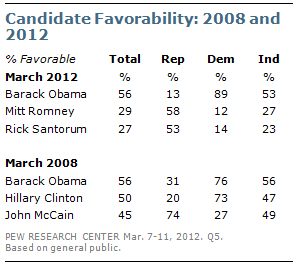 These low ratings for the GOP candidates in 2012 stands in sharp contrast to assessments of the major candidates four years ago. In March of 2008, John McCain was viewed favorably by 45% of Americans, including 49% of independents. Notably, 74% of Republicans felt favorably toward McCain four years ago, compared with 58% and 53% who say the same about Romney and Santorum today.

At 56%, Barack Obama’s overall favorability rating matches public opinion in March 2008. But, not surprisingly, views of him are far more partisan today. Just 13% of Republicans view him favorably, compared with 31% in March 2008. Meanwhile, 89% of Democrats now view him favorably, compared with 76% four years ago. Independent views of Obama today are virtually identical to March of 2008 (53% vs. 56% favorable). 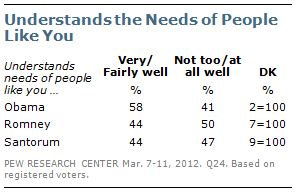 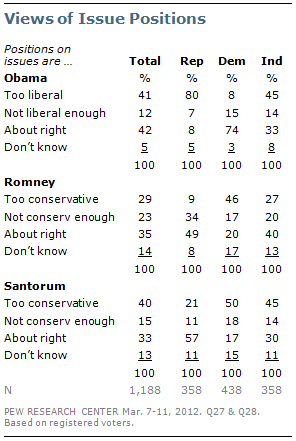 Santorum Catches Romney in GOP Race
Romney Leads GOP Contest, Trails in Matchup with Obama
Unpopular Nationally, Romney Holds Solid GOP Lead
GOP Voters Still Unenthused About Presidential Field
Americans are divided by party in the sources they turn to for political news
5 facts about presidential and vice presidential debates
The 2020 Trump-Biden matchup
An examination of the 2016 electorate, based on validated voters
Science and Scientists Held in High Esteem Across Global Publics