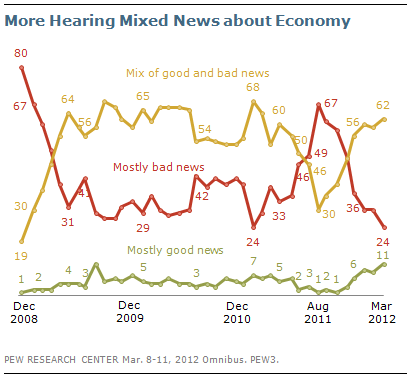 Perceptions of economic news have improved sharply since last summer, a time many feared the nation could be slipping back into recession. However, opinions about national economic conditions remain overwhelmingly negative.

The percentage saying they are hearing mostly bad news about the economy has fallen from 67% last summer to 24% in the current survey. Over this period, the proportion saying that economic news is a mix of good and bad has more than doubled, from 30% in August to 62% today. The percentage hearing mostly good news now stands at 11%, up from just 1% last August.

Perceptions of news about several sectors of the economy – including the 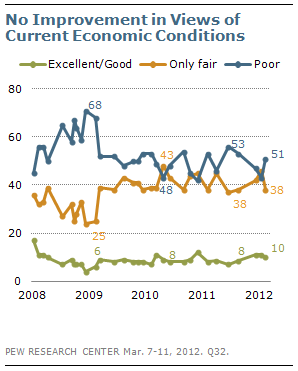 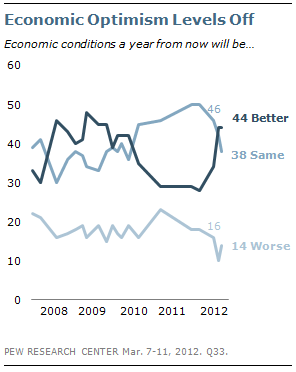 onomic conditions remain stubbornly negative. Just 10% describe the economy as excellent or good, while about nine-in-ten (89%) say conditions are only fair (38%) or poor (51%). Taken together, the negative assessments have changed little in many months.

In addition, optimism about the economy, which had increased in recent months, has leveled off. Overall, 44% say they expect economic conditions 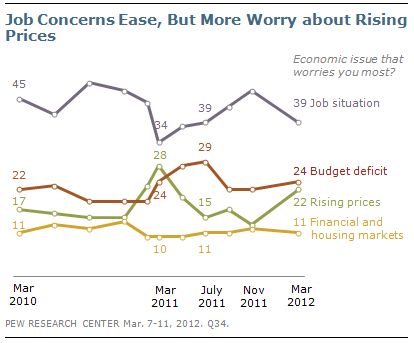 to be better a year from now, 14% say conditions will be worse, and 38% say they will be the same. That is about the same as last month. From December to February, the percentage saying they expected economic conditions to improve rose 16 points (from 28% to 44%).

Growing concern over gas prices may be reflected in the public’s changing economic concerns. As has been the case for the past two years, a plurality of Americans (39%) say the job situation is the national economic issue that worries them most. But the percentage citing jobs has declined by eight points since November (from 47%), while the share citing rising prices has risen, from 13% then to 22% today. 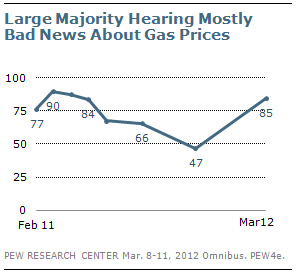 Though the public has seen more of a mix of good and bad news about the overall economy in recent months, the news about gas prices is now seen as overwhelmingly bad.

Last March, 90% said news about gas prices had been mostly bad. But by last November, that had dropped to 47%. 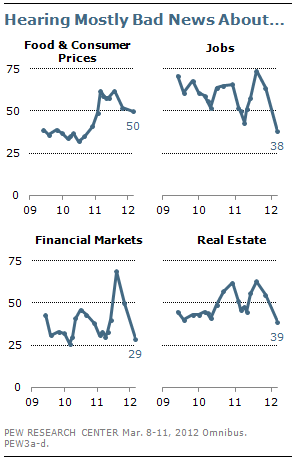 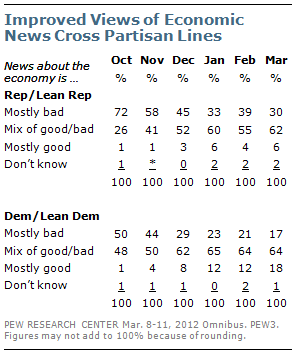 There continue to be partisan differences in perceptions of economic news generally, as well as in views of news about economic sectors. But since last fall, the percentages of both Republicans and Democrats who say economic news is mostly bad has fallen across partisan lines.

In the current survey, 30% of Republicans and Republican-leaning independents say they are hearing mostly bad news about the economy, down from 58% last November and 72% in October. The decline has been comparable among Democrats and Democratic leaners: Just 17% now say the news is mostly bad; last October, 50% expressed this view.

Partisan Differences in Views of Economy 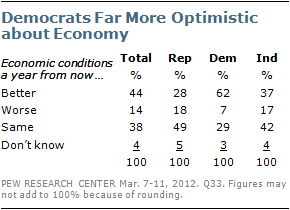 Partisans also offer sharply different assessments of how the economy is likely to fare over the next year. About half of Republicans (49%) expect economic conditions will be about the same a year from now. Nearly three-in-ten (28%) say conditions will be better, while 18% expect conditions to be worse. 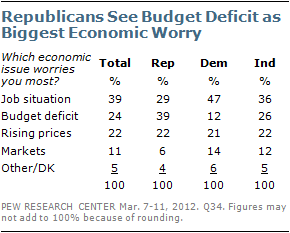 Last November, about as many Republicans cited jobs (39%) as the deficit (36%) as their top economic worry. But the percentage of Republicans citing the job situation has declined by 10 points since then while the percentage citing the deficit is unchanged. The proportion of independents citing the job situation as their top economic worry also has fallen 1o points (from 46% to 36%) since November.