For the first time since shortly after the killing of Osama bin Laden, half of all Americans (50%) say they approve of Barack Obama’s job performance, while just 41% disapprove. Over the course of 2012, Obama’s job approval has improved from 44% in January to 47% in February to 50% today.

For the second month in a row, about as many independents say they approve of how Obama is handling his job as president as disapprove (45% vs. 42%, virtually unchanged from 45% vs. 44% in February). This is a substantial improvement from the previous seven months. From July 2011 through January 2012, significantly more independents consistently disapproved than approved of Obama’s job performance. 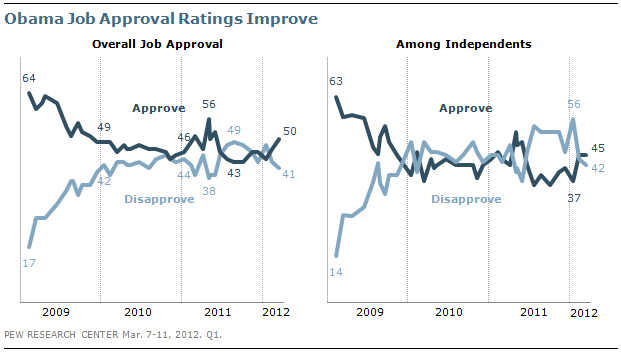 There also has been a recovery in Obama’s job ratings among Democrats – fully 85% approve of his performance today. While this is little changed from February (84%) it represents an improvement from January (79%) and a recent low of 77% in August. Just 11% of Republicans approve of the job Obama is doing, with no significant change in recent months.

While modest, the improvement in Obama’s job approval rating has spanned most demographic groups.

His approval has risen significantly among Americans age 50 and older, from 40% in January to 50% today – closing what had been a substantial age gap. Among those 18-49, there has been little shift in overall job approval (48% in January, 50% today).

Obama’s job approval also has risen notably among white college graduates, from 42% in January to 53% today. Whites without a college degree remain, on balance, critical of Obama’s job performance, with just 35% offering a positive assessment. 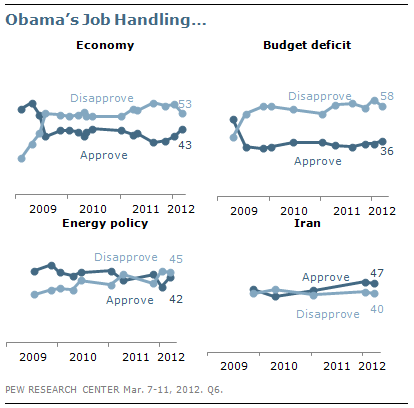 On the key issue of the economy, more Americans continue to disapprove (53%) than approve (43%) of Obama’s job performance. But evaluations have improved in recent months, with approval rising from 35% in November to 38% in January and reaching 43% today.

Democrats continue to support Obama’s handling of the economy, though at 73%, his approval on this issue is significantly lower than Democratic job approval ratings overall. Republicans continue to be highly critical of Obama’s economic job performance (90% disapprove). Notably, fewer independents now disapprove (54%) of his handling of the economy than in January (67%). 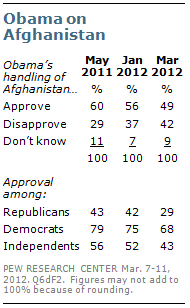 Currently, 49% approve of how Obama is handling the situation in Afghanistan, down from 56% in January and 60% in May 2011 following bin Laden’s killing. The number of independents who approve of Obama’s job on Afghanistan has slipped from 52% in January to 43% today, and fallen among Republicans from 42% to 29%.

The president’s approval rating on Iran, by contrast, is largely unchanged from January. About half (47%) approve of the way Obama is dealing with Iran, while 40% disapprove.

About as many now approve as disapprove of Barack Obama’s job on energy policy (42% vs. 45%). The president’s rating on energy has rebounded from the start of the year. In January, more disapproved (46%) than approved (36%) of his policies.

Next: Section 4: Views of the Parties
← Prev Page
Page1Page2Page3You are reading page4Page5Page6Page7Page8
Next Page →