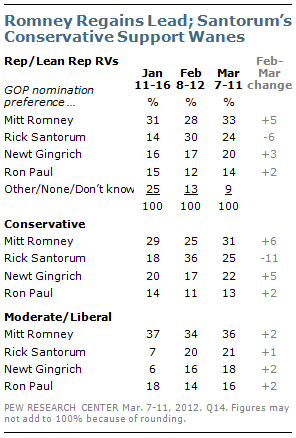 Mitt Romney has regained the lead in the support for his party’s presidential nomination, as conservative backing for Rick Santorum has declined. Romney currently holds a 33% to 24% lead over Santorum among registered Republican and Republican-leaning independent voters, with 20% backing Newt Gingrich and 14% favoring Ron Paul.

Moderate and liberal Republicans have not changed their primary preferences over the past month, with Romney holding a consistent lead among these voters. 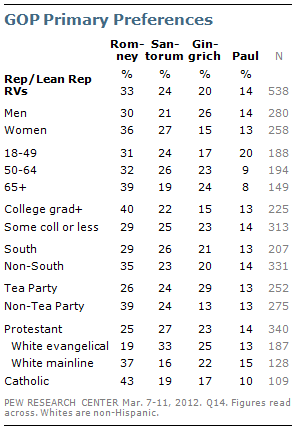 As has been the case in most of the state exit polls, Romney garners substantially less support from less educated and Tea Party Republican and Republican-leaning voters. College graduates favor Romney over Santorum by a 40% to 22% margin, while those without a college degree are more divided: 29% back Romney, 25% Santorum, and 23% Gingrich.

Tea Party Republicans split their support between Gingrich (29%), Romney (26%) and Santorum (24%), while Romney holds a double-digit lead among the roughly half of Republican and Republican-leaning voters who do not identify with the Tea Party.

Republican men are divided in their support, with 30% backing Romney, 26% Gingrich, and 21% Santorum. Among women, 36% favor Romney for the nomination, compared with 27% who back Santorum and just 15% who back Gingrich.

Religion remains a deep divide within the Republican electorate; white evangelical Republicans are less likely than white mainline Protestants and Catholics to favor Romney for the nomination. 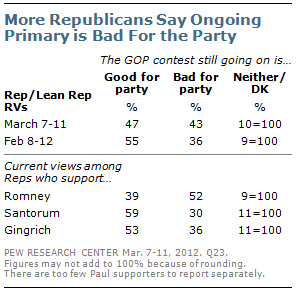 Republican evaluations of the quality of the GOP field have changed little over the course of the campaign. About half (49%) say the candidates for the party’s nomination are excellent (6%) or good (43%), while 48% say they are 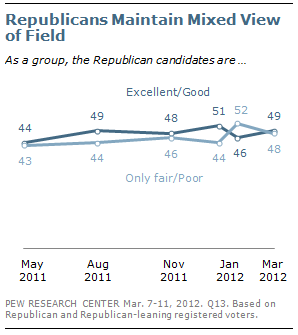 only fair (39%) or poor (9%). In February 2008, a few weeks after Super Tuesday, 60% of Republican and Republican-leaning voters said the field was excellent or good, while 38% said it was only fair or poor. Democrats also were more enthusiastic about their field in 2008 – fully 80% said they had excellent or good candidates. 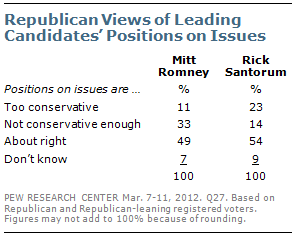 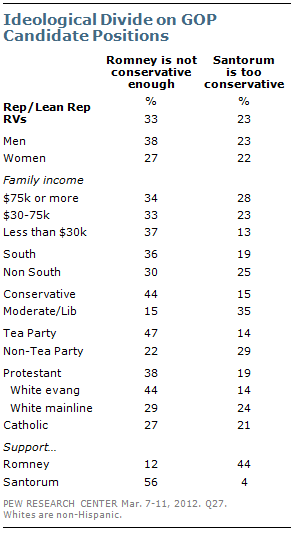 Republican-leaning voters who back Rick Santorum for the nomination. Men are significantly more likely than women to say Romney is not conservative enough in his position on the issues (38% vs. 27%).

The impression that Santorum is too conservative is less common among GOP voters overall, but held by 44% of those who back Mitt Romney, and 35% of moderate and liberal Republicans. This view is also more prevalent among Republicans with family incomes of $75,000 or more (28%) than among those earning $30,000 or less (13%). 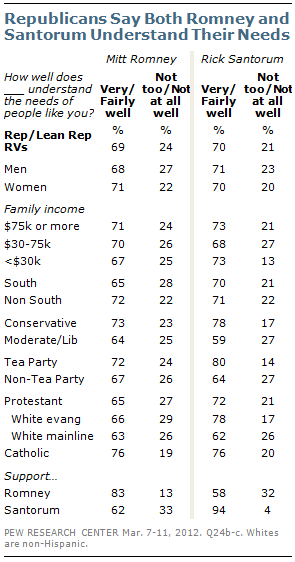 There is little difference across most groups within the Republican electorate. Broad majorities of men and women, those with high and low incomes, and Southern and non-Southern Republican voters say each candidate understands the needs of people like them.

Conservative Republicans give Santorum higher marks than do moderates and liberals on this question (78% vs. 59%). While 78% of white evangelical Republicans say Santorum understands the needs of people like them, fewer (66%) say the same about Romney. 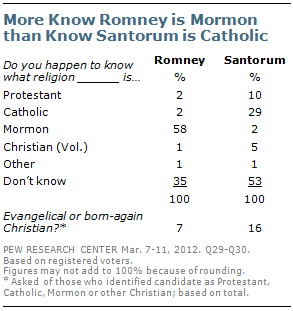 The percentage of all registered voters who know that Mitt Romney is Mormon has increased from 48% in November to 58%. A majority of Democratic and Democratic-leaning voters (55%) know Romney’s religion, as do 65% of Republicans and Republican-leaners.

Only about three-in-ten voters (29%) can identify Rick Santorum as a Catholic. This includes 32% of Republican and Republican-leaning voters and 27% of Democrats and Democratic-leaners. Another 15% identify Santorum as either Protestant (10%) or volunteer that he is Christian (5%). About half (53%) of voters say they don’t know his religion. 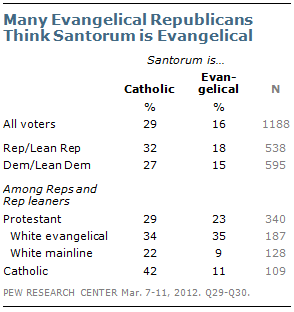 In a follow-up question, about a third of those who identify Santorum as a Christian – 16% of voters overall – say they believe he is an evangelical or born-again Christian.

Among Republican and Republican-leaning voters, 42% of Catholics know that the former Pennsylvania senator is Catholic compared with 29% of Protestants.

Next: Section 2: The General Election
← Prev Page
Page1You are reading page2Page3Page4Page5Page6Page7Page8
Next Page →