With voters continuing to focus on economic issues, Barack Obama holds a slim 49% to 45% advantage over Mitt Romney in the latest Pew Research Center survey of nearly 2,400 registered voters nationwide. Obama’s lead has narrowed since last month, when he had a 12-point advantage, though it is comparable to margins from earlier this year.

More than eight-in-ten voters say the economy (86%) and jobs (84%) are very important issues in deciding who to vote for this fall. Roughly three-quarters also cite the federal budget deficit (74%), health care (74%) and education (72%) as top voting priorities. Near the bottom of the list are some of the hot-button social issues. Just 28% say that gay marriage is a very important issue, and 34% rate birth control as a top issue.

The latest national survey by the Pew Research Center for the People & the Press, conducted April 4-15, 2012 among 3,008 adults, including 2,373 registered voters, shows that Obama continues to owe his lead to support from women, college graduates, blacks, Latinos and lower income voters – all of whom support him over Romney by double-digits.

The gender gap remains comparable to those in previous surveys during the current campaign, as well as past election cycles; women favor Obama by a 53% to 40% margin; among men voters, 50% favor Romney, while 44% back Obama. Obama has lost ground among both men and women at about the same rate over the past month. 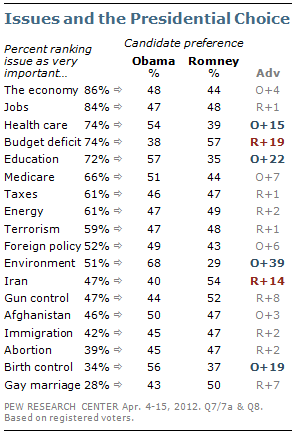 With nearly all voters concerned about the economy, neither candidate has a clear advantage on the issue. Those who say the economy and jobs will be very important to their vote divide their support almost evenly between Obama and Romney. But the candidates each have advantages on other top-tier issues. Health care and education voters favor Obama by double-digits. Those who rank the federal budget deficit as a top priority favor Romney by a 57% to 38% margin. Romney is also the preferred candidate among those who rank Iran as very important, while Obama leads among those who cite the environment.

The End of the GOP Primary 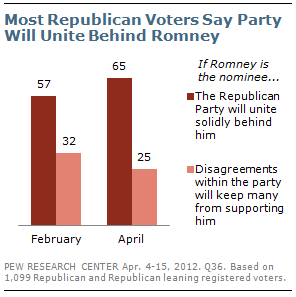 As the GOP primary winds down, the party base is getting behind Mitt Romney. Nearly two-thirds (65%) of Republican and Republican-leaning voters now say that the party will unite solidly behind Romney as the nominee, up from 57% in February. This matches the 64% who said the party would unite behind McCain at a comparable point four years ago.

But GOP enthusiasm for Romney remains limited. Even after Rick Santorum announced the suspension of his campaign, 45% of Republican and Republican-leaning voters support Romney for the Republican nomination. About as many (46%) continue to say they would like to see Santorum, Newt Gingrich, Ron Paul or someone else get the nomination. 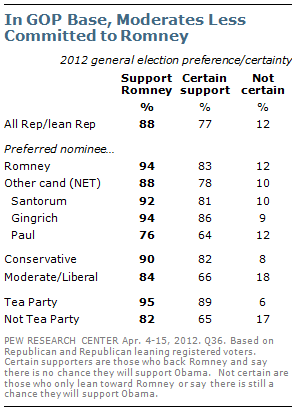 While he may not by their preferred nominee, there is little doubt that an overwhelming proportion of Republicans will back Romney in the fall. Among Republican and Republican-leaning voters who favor another GOP nominee, 88% back Romney over Obama, and 78% say there is no chance they will change their mind. This is particularly the case among Santorum and Gingrich supporters. Republicans who favor Paul are less committed to a Romney candidacy.

To the extent that Romney has a base problem, it is not with the conservatives or white evangelical Protestants. Nine-in-ten conservative Republicans (90%) support Romney, and 82% are certain about their vote. Similarly, 91% of white evangelical Republican voters support Romney; 84% say there is no chance they will change their mind. And among Tea Party Republicans, 95% back Romney, and 89% say they will not change their mind.

Instead, commitment to Romney is substantially weaker among moderate and liberal Republicans and those who do not agree with the Tea Party. While at least eight-in-ten in each group say they prefer Romney to Obama, only about two-thirds of each say they firmly back Romney and will definitely not change their mind. 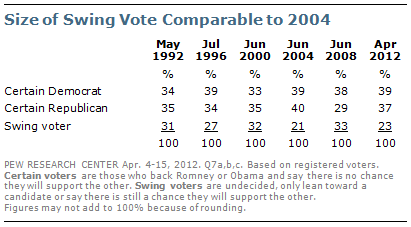 Overall, 23% of registered voters today are swing voters, in that they are either undecided, only lean toward a candidate, or favor a candidate but say there is still a chance they will change their minds.

This compares with 33% in June of 2008 after both the Democratic and Republican primaries were largely concluded. The swing vote is somewhat smaller in elections when incumbents are running for reelection.

As previous Pew Research Center surveys have shown, neither the public nor Republicans themselves have been very impressed with the field of GOP candidates. A separate survey, 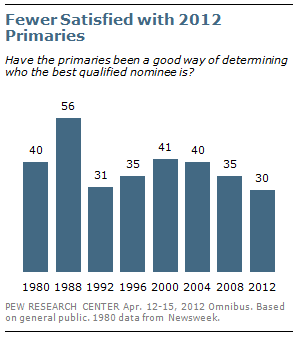 conducted April 12-15 among 1,002 adults finds negative views of the primary process itself: Just 30% of Americans say the presidential primaries have been a good way of determining the best-qualified nominees, while 57% say they have not.

These views are comparable to opinions about the primaries in early June 2008, when 35% said the primary system had been a good way of determining the best-qualified nominees and 60% disagreed.

Next: Section 1: General Election Preferences
← Prev Page
You are reading page1Page2Page3Page4
Next Page →

With Voters Focused on Economy, Obama Lead Narrows
OverviewThe End of the GOP PrimaryOne-in-Four Are Swing VotersViews of 2012 Primaries
Section 1: General Election Preferences Section 2: Issues of the 2012 Campaign About the Surveys