The controversy over the death of Trayvon Martin has highlighted issues relating to the treatment of blacks by local police departments, the state of race relations in the U.S. and press coverage of African Americans. Pew Research Center surveys in recent years have covered the opinions of blacks and whites on these and other issues. 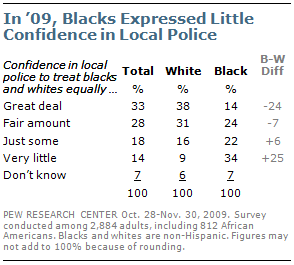 number of areas, including their treatment of racial groups.

Yet that survey showed that African Americans had a positive overall assessment of the state of race relations. About three-quarters of African Americans (76%) said blacks and whites got along “very well” or “pretty well.” Majorities of both blacks (60%) and whites (70%) said that the values of the two groups had gotten more similar over the previous 10 years.

And in the wake of Barack Obama’s election as president, there was a sharp rise in perceptions of black progress. Nearly four-in-ten African Americans (39%) said that the “situation of black people in this country” was better than it had been five years earlier. In 2007, just 20% said the condition of blacks had improved in the previous five years. 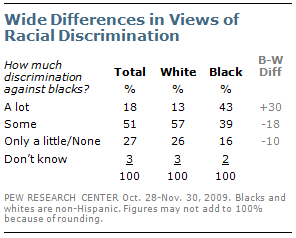 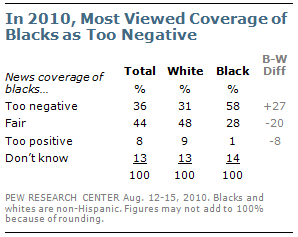 A 2010 study by the Pew Research Center found that African Americans were highly critical of news coverage of blacks. Nearly six-in-ten (58%) said that coverage of blacks was too negative. Just half as many (29%) said coverage was either fair (28%) or too positive (1%).

The Pew Research Center’s most recent News Interest Index, conducted March 22-25 among 1,003 adults, found that Trayvon Martin’s death was the public’s top news story. African Americans were more than twice as likely as whites to say that this was their top story (52% vs. 20%).

On March 30, the Pew Research Center’s Project for Excellence in Journalism released a report showing the very different ways that cable TV news outlets and talk radio, blogs and Twitter have covered and analyzed the Trayvon Martin story. It found that Twitter interest in the Martin story did not surge until March 17, three weeks after the teenager’s death. (For more, see “How Blogs, Twitter and Mainstream Media Have Handled the Trayvon Martin Case.”)