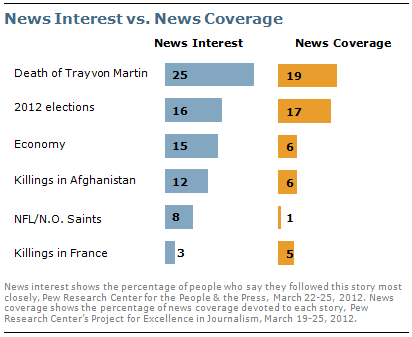 The growing controversy over the shooting death of 17-year-old Trayvon Martin in Florida was the public’s top story last week, though African Americans express far greater interest in news about the killing than do whites.

Overall, a quarter of Americans (25%) say they followed news about the African American teenager killed by a community watch volunteer more closely than any other story. Smaller percentages say they followed news about the presidential elections (16%) or the economy (15%) most closely, according to the latest weekly News Interest Index survey, conducted March 22-25, 2012, among 1,003 adults by the Pew Research Center for the People & the Press. 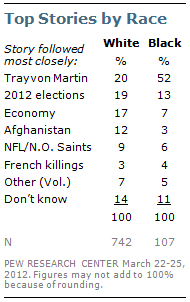 Looking at a separate measure, 35% of the public says they followed news about the shooting and the still-unfolding controversy very closely. Seven-in-ten blacks say this (70%), compared with 30% of whites.

Though the shooting occurred on Feb. 26, the controversy developed into a major national story last week amid debates about racial attitudes and crime, the thoroughness of the police investigation and a Florida law that allows people to defend themselves with deadly force under certain circumstances. News about the incident and its aftermath topped coverage as well, accounting for 19% of the newshole, according to a separate analysis by the Pew Research Center’s Project for Excellence in Journalism. News about the presidential campaign accounted for 17% of coverage.

The gap between black and white attentiveness to news about the Trayvon Martin story follows a pattern seen in other stories involving questions about race and the law dating back more than 20 years. In March 1991, for example, 66% of African Americans said they very closely followed news about the videotaped beating of Rodney King, captured by Los Angeles police after a car 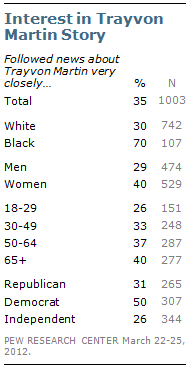 The pattern among partisans largely holds when looking exclusively at whites. Fully 45% of white Democrats say they followed developments in the Martin shooting very closely, compared with 32% of white Republicans and 21% of white independents.

Public Sees Presidential Campaign as Too Negative, Too Long 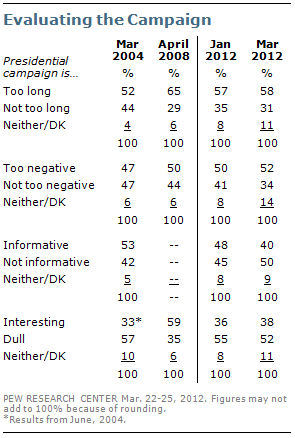 Nearly six-in-ten Americans (58%) say the presidential campaign so far is too long, about the same as the 57% that said this in January. About three-in-ten (31%) say it has not been too long. In April 2008, about two-thirds (65%) said that the campaign – with primary fights in both parties – was too long.

Currently, 52% say the campaign so far is dull; 38% say it is interesting. That’s little changed from January but stands in contrast to April 2008, when about six-in-ten (59%) said the campaign was interesting and 35% saw it as dull. 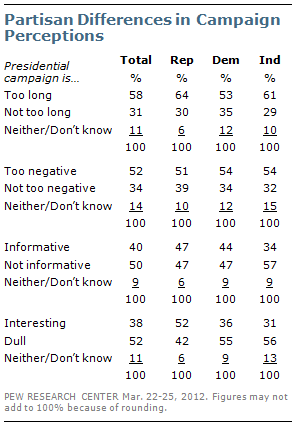 While overall views on these questions are little changed since January, Republicans are more likely than they were to say the campaign is too long. With the GOP primary fight ongoing, 64% say this, compared with 49% in January. At that point, 60% of Democrats said the campaign was too long; 53% say this today.

There is little difference among partisans on the questions about how informative or how negative the campaign has been to this point.

Though the 2012 presidential campaign was the second most closely followed story last week, 55% of the public says they had not heard about one of the week’s more prominent election stories: a gaffe by a top strategist for Mitt Romney who said that the candidate would recalibrate his campaign once he wins the GOP nomination, shaking the slate clean like an Etch A Sketch toy. 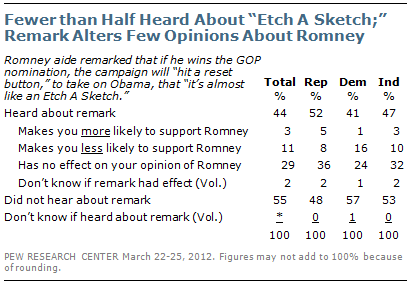 Just more than four-in-ten (44%) say they heard about the remark, which critics used to hit Romney for shifting his positions on certain issues.

More Republicans heard about the comment than Democrats (52% vs. 41%). Among independents, 47% were aware of aide Eric Fehrnstrom’s words.

Among all Republicans, nearly one-in-ten (8%) say the remarks make them less likely to support Romney. That amounts to 16% of those who had heard of Fehrnstrom’s words. On the other hand, 5% of all Republicans — and 10% of those who had heard about the comment – say it makes them more likely to support Romney. Responses from independents are similar.

Aside from the Trayvon Martin story and election developments, the public continued to keep a close watch on economic news. Roughly a third (36%) say they followed news about the condition of the U.S. economy very closely, a level little changed in recent months. News about the economy accounted for 6% of coverage. 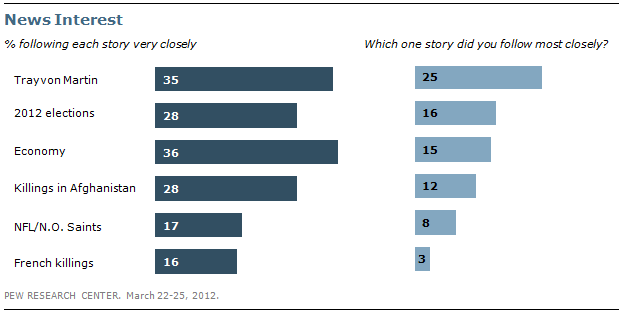 About three-in-ten (28%) very closely followed news about the U.S. Army staff sergeant charged last week with killing civilians in Afghanistan; 12% say this was the news they followed most closely. News about the incident accounted for 6% of coverage. Including these developments, news about Afghanistan totaled 9% of the newshole.

Nearly two-in-ten (17%) say they very closely followed news about the National Football League suspending several coaches involved in paying bounties to players for injuring opponents when they were with the New Orleans Saints; 8% say this was the news they followed most closely. Nearly a quarter of men (23%) say they followed this news very closely, about double the 11% of women who say this. News about the suspensions made up 1% of coverage analyzed by PEJ.

Just 16% say they very closely followed news about French police killing a man accused of murdering children and adults at a Jewish school; 3% say this was the news they followed most closely. News about the killings and the deadly standoff with police accounted for 5% of coverage.

These findings are based on the most recent installment of the weekly News Interest Index, an ongoing project of the Pew Research Center for the People & the Press. The index, building on the Center’s longstanding research into public attentiveness to major news stories, examines news interest as it relates to the news media’s coverage. The weekly survey is conducted in conjunction with The Project for Excellence in Journalism’s News Coverage Index, which monitors the news reported by major newspaper, television, radio and online news outlets on an ongoing basis. In the most recent week, data relating to news coverage were collected March 19-25, and survey data measuring public interest in the top news stories of the week were collected March 22-25, 2012 from a nationally representative sample of 1,003 adults.