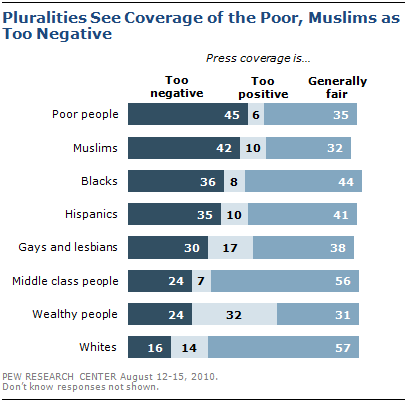 In evaluating news coverage of different groups, pluralities of Americans say that coverage of poor people and Muslims is too negative, while somewhat smaller percentages say the same about coverage of blacks and Hispanics.

Notably, about a third (32%) say that coverage of wealthy people is too positive – the highest percentage for any group included in the survey. About as many see coverage of the wealthy as too positive as say it is generally fair (31%).

These are the results of latest weekly News Interest Index survey, conducted August 12-15 among 1,005 adults by the Pew Research Center for the People & the Press, which also finds that Americans continued to track the oil leak in the Gulf of Mexico last week more closely than other major stories. With coverage of the leak down significantly, the public’s high interest likely reflects the perceived importance of the story; 44% say this was the story they followed most closely, while the spill accounted for just 3% of the newshole, according to the Pew Research Center’s Project for Excellence in Journalism. 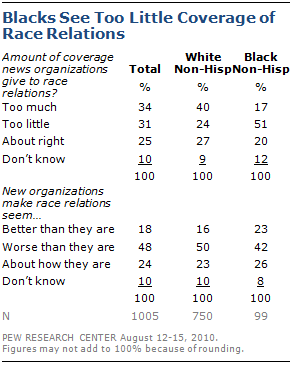 The survey also shows that the public is divided over whether news organizations devote too much coverage to race relations in this country. Still, close to half (48%) say the media make relations between the races seem worse than they actually are, while about a quarter (24%) say they reflect race relations as they really are.

Just more than a third (34%) say news organizations give too much attention to race relations, while a comparable 31% say they give these difficult issues too little coverage and 25% say the amount is about right.

African Americans are much more likely than whites to say news organizations give too little attention to race relations (51% vs. 24%), though pluralities in both groups (42% for blacks, 50% for whites) say the media make race relations seem worse than they actually are.

Those 18-29 are more likely than other age groups to say that the media gives too little attention to race relations. About half (49%) say this, compared with 18% of those 65 and older. Again, the differences narrow when people are asked to assess the coverage. For example, 41% of those 18-29 say news organizations make race relations seem worse than they are, just about the same as the 44% of those 65 and older who say this. 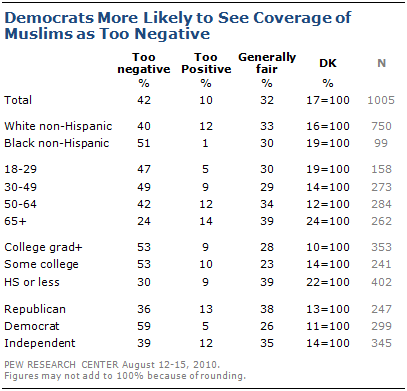 When assessing news coverage of Muslims, older people are less likely than others to say coverage is too negative—just 24% of those age 65 and over say this, compared with more than four-in-ten of those in younger age groups.

College educated Americans are significantly more likely than those who have not attended college to say media treatment of Muslims is too negative; a majority of those with college experience (53%) say this, compared to just 30% of those with a high school education or less.

African Americans See Coverage of Blacks as Too Negative

Nearly six-in-ten African Americans (58%) say that news coverage of blacks is generally too negative. A 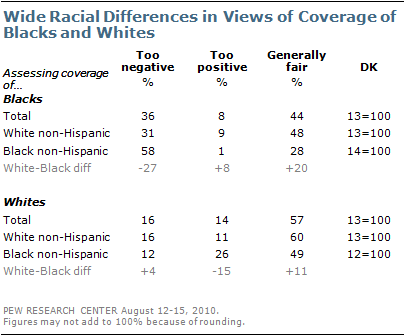 sizeable minority of whites (31%) also says that blacks are portrayed too negatively in news stories. Still, nearly half of whites (48%) say media treatment of blacks is generally fair (just 28% of blacks say this). African Americans also are more likely than whites to say that media coverage of Hispanics is too negative (48%, compared with 32% of whites).

Coverage of Wealthy, Middle-Class and Poor 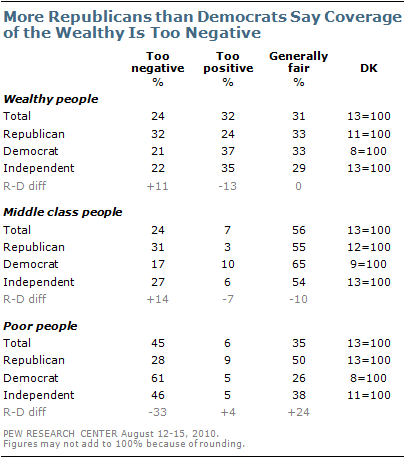 Republicans and Democrats offer differing views of coverage of people at every income level. Nearly a third of Republicans (32%) say coverage of the wealthy is too negative, about the same number who say it is generally fair (33%); 24% of Republicans say press coverage of wealthy people is too positive.

By contrast, Democrats are substantially more likely than Republicans to say press coverage of the affluent is too positive (37%), while just 21% say it is too negative. Independent views of coverage of wealthy people mirror those of Democrats.

A clear majority of Democrats (61%) say the media is too negative in its coverage of the poor; 46% of independents and just 28% of Republicans say this. 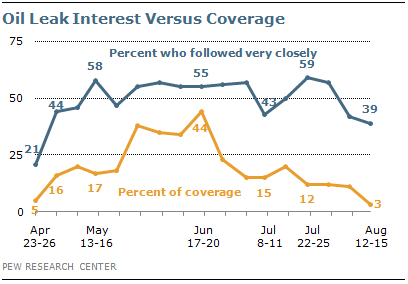 Public attention to the major oil leak in the Gulf of Mexico has yet to drop off as significantly as media coverage. Currently, 39% say they followed news about the leak very closely last week, not much different from the 42% that said this one week earlier. Still, that is down sharply from 59% in the July 22-25 survey. More than four-in-ten (44%) say this was the story they followed most closely last week.

The oil leak accounted for 3% of the coverage measured by PEJ, down from 11% one week earlier. With the underground well largely sealed, coverage has declined greatly since a 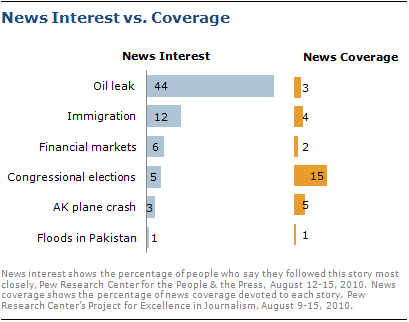 peak of 44% of the newshole in mid-June.

Two-in-ten (20%) say they followed news about this year’s congressional elections very closely, while 5% say this was the news they followed most closely. News about the elections, including several hotly contested primaries, proved to be the most covered news of the week, accounting for 15% of coverage.

Fewer than two-in-ten (17%) say they followed news about recent ups and down in the stock market very closely; 6% say this was the news they followed most closely. News about the financial markets accounted for 2% of coverage. Economic news more generally –including the market fluctuations – accounted for 12% of coverage, according to PEJ, making it the second most reported news of the week.

Just 8% say they very closely followed news about the floods in Pakistan; 1% say this was the story they followed most closely. The flooding accounted for 1% of coverage.

And 7% say they very closely followed news about the Alaska plane crash that killed former Sen. Ted Stevens; 3% say this was the news they followed most closely. The crash accounted for 5% of coverage. 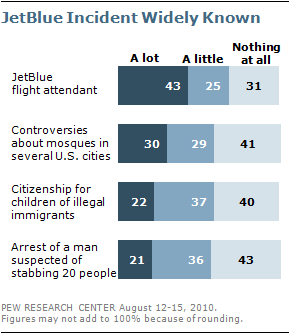 More than four-in-ten Americans (43%) say they heard a lot last week about the dramatic exit by JetBlue flight attendant Steven Slater from his plane at New York’s Kennedy Airport after an argument with a passenger. A quarter (25%) say they heard a little about how Slater had quit his job, opened the plane door and hopped on the emergency exit chute. About three-in-ten (31%) say they heard nothing at all about this story.

Just more than two-in-ten (22%) say they heard a lot about the debate about changing the Constitution so that children of non-citizens born in the United States would no longer automatically be U.S. citizens. Another 37% heard a little about this debate, while 40% say they heard nothing at all. On this, there are no significant differences among partisans.

These findings are based on the most recent installment of the weekly News Interest Index, an ongoing project of the Pew Research Center for the People & the Press. The index, building on the Center’s longstanding research into public attentiveness to major news stories, examines news interest as it relates to the news media’s coverage. The weekly survey is conducted in conjunction with The Project for Excellence in Journalism’s News Coverage Index, which monitors the news reported by major newspaper, television, radio and online news outlets on an ongoing basis. In the most recent week, data relating to news coverage were collected August 9-15, and survey data measuring public interest in the top news stories of the week were collected August 12-15, from a nationally representative sample of 1,005 adults.

Results for this survey are based on telephone interviews conducted under the direction of Princeton Survey Research Associates International among a national sample of 1,005 adults living in the continental United States, 18 years of age or older, from August 12-15, 2010 (672 respondents were interviewed on a landline telephone, and 333 were interviewed on a cell phone, including 141 who had no landline telephone). Both the landline and cell phone samples were provided by Survey Sampling International. Interviews were conducted in English.