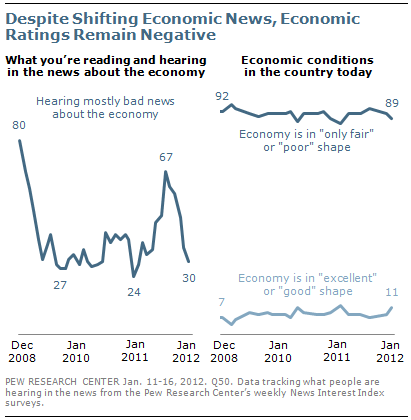 mostly bad news, while 60% said the economic news was a mix of good and bad, and 9% said the news was mostly good.

While what people are hearing about unemployment rates and economic growth month-to-month registers with them, it does not have an immediate impact on their overall economic assessments. For more than three years, roughly 90% of Americans have said the nation’s economy is in only fair or poor shape, with little variation around ups-and-downs in the economic news cycle. 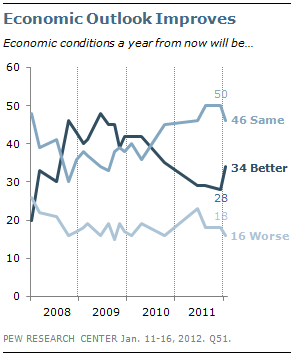 Despite hearing some more positive reports in recent months, the American public enters 2012 with the same negative overall assessments. Most say the economy is in only fair (42%) or poor (47%) shape, with only a small minority (11%) offering a positive rating.

But the economic outlook of Americans has improved slightly over the past month. Currently, 34% say they expect the economy to be in better shape a year from now, up from a 3-year low of 28% last 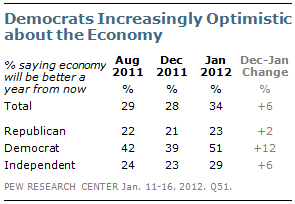 month. This improved outlook comes predominantly from Democrats, 51% of whom say they think the economy will pick up over the next year. Only around half as many Republicans (23%) and independents (29%) share this optimism.

Despite four consecutive months of dropping unemployment rates, Americans continue to see tough times on the job front. Fully 78% say that jobs are difficult to find in their area, 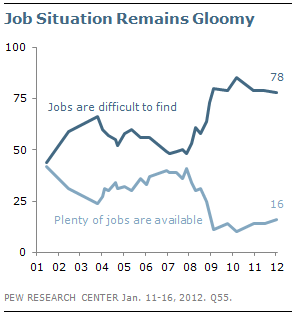 down only modestly from a decade high of 85% last March. Just 16% say they think there are plenty of jobs available in their community.

Unlike other economic measures, where Democrats offer a more upbeat assessment than Republicans, Republicans and Democrats have virtually identical assessments of job availability: 21% in each party believe that there are plenty of jobs available. By contrast, independents are particularly skeptical about the job situation – only 10% believe there are plenty of jobs available these days.