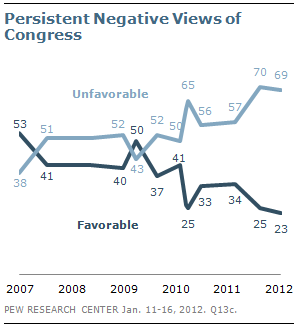 As Congress returns for the 2012 session, the American public’s view of the institution is as negative as it has ever been in over 25 years of Pew Research Center surveys. Just 23% of Americans say they have a favorable opinion of Congress, while 69% have an unfavorable view.
These opinions are little changed from August of last year when views of Congress turned sharply more negative in the midst of the debate over extending the nation’s debt ceiling.

There is virtually no partisan gap in ratings of Congress – 29% of Republicans and 26% of Democrats say they have a favorable opinion of Congress. Even fewer independents, just 19%, view Congress favorably.

Not only are views of Congress negative, but so too are views of the two majority leaders. Only 21% say they have a favorable view of John Boehner while nearly twice as many (40%) have an unfavorable 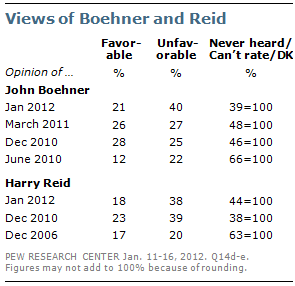 view; 39% have no opinion or have not heard of him. The public’s opinion of Boehner has turned sharply more negative since March of last year when just 27% expressed an unfavorable view and as many (26%) had a favorable opinion of Boehner.

Similarly, Harry Reid also receives very negative ratings. Just 18% say they have a favorable opinion of Reid while about twice as many (38%) have an unfavorable opinion. These views have changed little since December 2010. 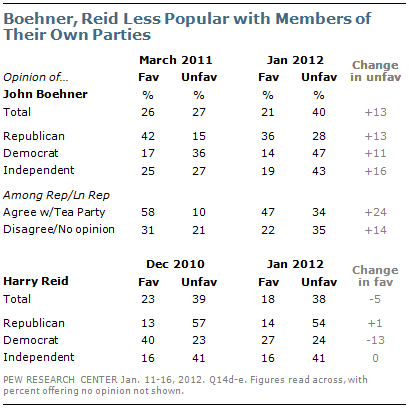 Independents view Boehner far more negatively now than they did last year, and nearly as critically as do Democrats. By a 43% to 19% margin more have an unfavorable opinion of Boehner than a favorable one. In March 2011, opinion among independents was divided (25% favorable, 27% unfavorable).

Harry Reid’s favorability among Democrats has dropped substantially over the past year. Currently, only 27% of Democrats say they have a favorable opinion of Reid while nearly as many (24%) have an unfavorable view. In December 2010, far more viewed him positively than negatively (40% vs. 23%). Views of Reid are very negative among both Republicans and independents, and have changed little over the past year. 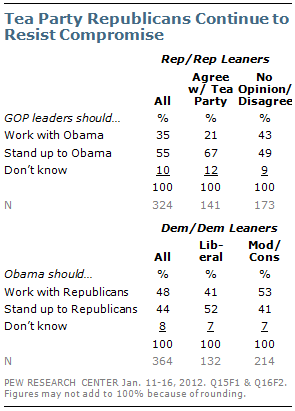