Barack Obama begins his fourth year in office facing a struggling economy, an unhappy public, and a lower job approval rating than most of his recent predecessors at a 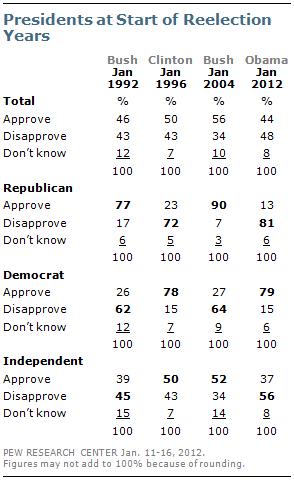 comparable point in their presidencies. In fact, Obama’s job rating today is a bit more negative than it was in December: 48% disapprove of his performance as president while 44% approve.

Nonetheless, Obama possesses political strengths at the start of his reelection year, notably a positive personal image. Large majorities say Obama stands up for his beliefs (75%), cares about people like them (61%) and is trustworthy (61%). And while perceptions of Obama’s leadership have declined over time, on balance more say he is a strong leader than disagree (52% vs. 45%).

The latest national survey by the Pew Research Center for the People & the Press, conducted Jan. 11-16 among 1,502 adults, finds that Obama’s personal image is much stronger than GOP frontrunner Mitt Romney’s. Currently, 51% say they have a favorable opinion of Obama while 45% have an unfavorable view. Romney’s favorability with the public stands at just 31%, while his unfavorable rating is as high as Obama’s (45%). (For more on the GOP primary and general election, see “Unpopular Nationally, Romney Holds Solid GOP Lead,” Jan. 18, 2012). 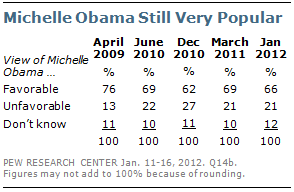 The survey also finds that Michelle Obama remains broadly popular with the public. Currently 66% say they have a favorable opinion of Michelle Obama while just 21% have an unfavorable view. Favorable opinions of the first lady have declined only modestly – by 10 points – since peaking at 76% early in her first year in the White House. In contrast, Barack Obama’s personal favorability has fallen by 22 points (from 73% to 51%) during this period.

The public’s views of the legacy of the Obama presidency reflect his mixed job approval ratings. About as many say Obama will be an unsuccessful (32%) as a successful president (27%), with a plurality (39%) saying it is too soon to tell. Similarly, about equal percentages think the failures of the Obama administration will outweigh its accomplishments (44%) as say its accomplishments will outweigh its failures (43%). On both measures, Obama is seen less positively than George W. Bush was at about the same point in his first term.

As has been the case for much of his presidency, Obama receives much better job approval ratings for terrorism and international threats than he does for the economy, energy policy 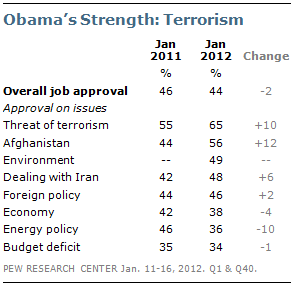 or the budget deficit. Obama’s approval rating for handling the threat of terrorism stands at 65%, 10 points higher than a year ago. His rating for terrorism today is nearly as high as it was just after the killing of Osama bin Laden last May (69%).

A majority of the public (56%) also approves of the way Obama is handling the situation in Afghanistan; just 37% disapprove. His job rating on Afghanistan also turned much more positive following bin Laden’s death and remains positive today.

However, Obama’s job ratings on major domestic issues – the economy and the federal budget deficit – remain abysmal. Just 38% approve of his handling of the economy while 59% disapprove. His rating on the budget deficit is equally negative (34% approve, 62% disapprove. The percentage disapproving of his handling of these issues has risen over the past year (by eight points and nine points, respectively). In addition, for the first time in Obama’s presidency, significantly more disapprove (46%) than approve (36%) of his handling of energy policy. (This survey was conducted before the Obama administration’s recent decision on the Keystone XL oil pipeline.)

Few “Green Shoots” Evident. Public views about the economy remain quite negative. Just 11% say the nation’s economy is excellent or good, and only 16% say jobs are plentiful in their community. Still, more expect economic conditions to be better a year from now than did so in December (34% now, 28% then). 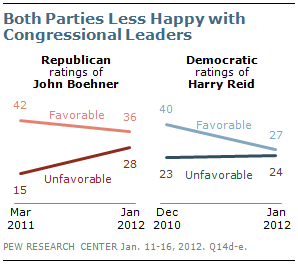 Congress at Record Low. Just 23% express favorable opinion of Congress, among the lowest measures ever in a Pew Research Center survey. House Speaker John Boehner and Senate Majority Leader Harry Reid are increasingly unpopular among members of their own parties.

Biden Down, Clinton Still Up. Joe Biden’s favorability rating has declined since the first year of the Obama administration. Just 38% view Biden favorably, down from 50% in November 2009. By contrast, 62% view Hillary Clinton favorably, largely unchanged over this period.

Obama’s Influences. Nearly seven-in-ten Republicans (69%) say Obama listens more to liberal Democrats than moderates in the party. Democrats, by contrast, increasingly see Obama being influenced by moderates – 58% of Democrats express this view, up from 44% in June 2010.

Next: Section 1: Barack Obama’s Performance and Image
← Prev Page
You are reading page1Page2Page3Page4Page5Page6
Next Page →