Barack Obama enters his fourth year in office with about as many Americans disapproving (48%) as approving (44%) of the job he is doing in office. A notable change over the past year

is the president’s standing among independents. Currently, 56% of independents disapprove of the job Obama is doing in office, while just 37% approve. A year ago, independents were divided evenly (44% approve, 45% disapprove). 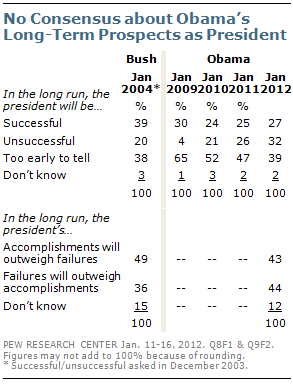 margin. After his reelection, this evaluation turned sharply negative, and by December of 2008 64% said the Bush administration’s failures would outweigh its accomplishments.

On another measure, 32% predict that Obama will end up being an unsuccessful president while 27% predict he will be successful, and 39% say it is still too early to tell. While fewer now believe it is too early to judge than did so last year, the relatively even balance of opinion on Obama’s long term success is little changed. As George W. Bush entered his re-election year, more thought his presidency would be successful than unsuccessful by roughly two-to-one (39% vs. 20%, with 38% saying it was too early to tell). 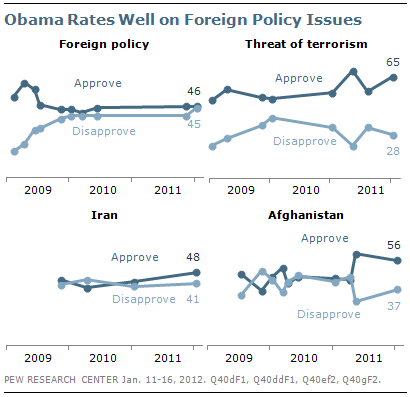 Obama continues to get stronger ratings on foreign and security policy than on economic issues at home. While opinion remains mixed as to his overall foreign policy (46% approve, 45% disapprove), Obama receives widely positive marks for his handling of terrorism (65% approve) and Afghanistan (56% approve). Reviews of Obama’s Afghanistan policy, in particular, improved earlier this year after the killing of Osama bin Laden, and have remained positive since.

And with increasing tensions between the U.S. and Iran, slightly more approve (48%) than disapprove (41%) of how Obama is dealing with the situation. This represents a 6-point 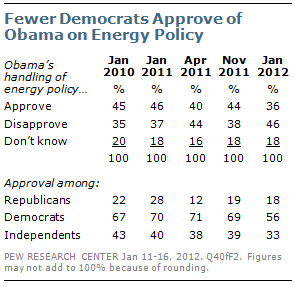 increase in approval on Iran since the question was last asked a year ago.

Although Obama’s foreign policy ratings are stable or improving, he has lost substantial ground on his handling of energy policy in just the past few months. Currently, just 36% of the public approves of how Obama is handling energy policy, while 46% disapprove. This is a reversal of the balance of opinion during much of 2010 and 2011. As recently as November, 44% approved of the job Obama was doing on energy, while 38% disapproved.

Two months ago, 69% of Democrats approved of the job Obama was doing on energy policy; that figure has dropped 13 points to 56%. There has been less change in opinions among independents (down six points) and Republicans (one point).

Obama gets better marks for his handling of the environment; about half the public (49%) approves of the job Obama is doing, while 36% 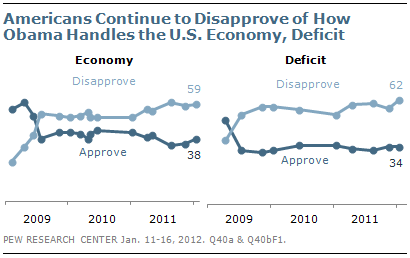 disapproves. These figures are virtually unchanged from April, and there has been no loss of Democratic support on the environment,with 75% approving of Obama’s job performance on the issue.

Majorities continue to disapprove of the job Obama is doing handling the economy and the federal deficit. About six-in-ten disapprove of each. Disapproval on the deficit is up since November, from 57% to 62%. 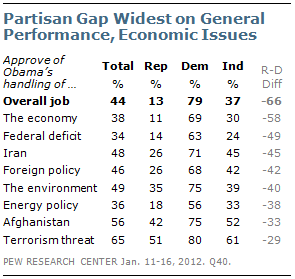 Obama continues to be widely viewed as a good communicator (78% say this phrase reflects their impression of him), someone who stands up for what he believes in (75%), warm and friendly (71%) and well-informed (69%). Somewhat fewer view Obama as someone who cares about people like them (61%) and trustworthy (also 61%). These impressions have changed little over the past two years. 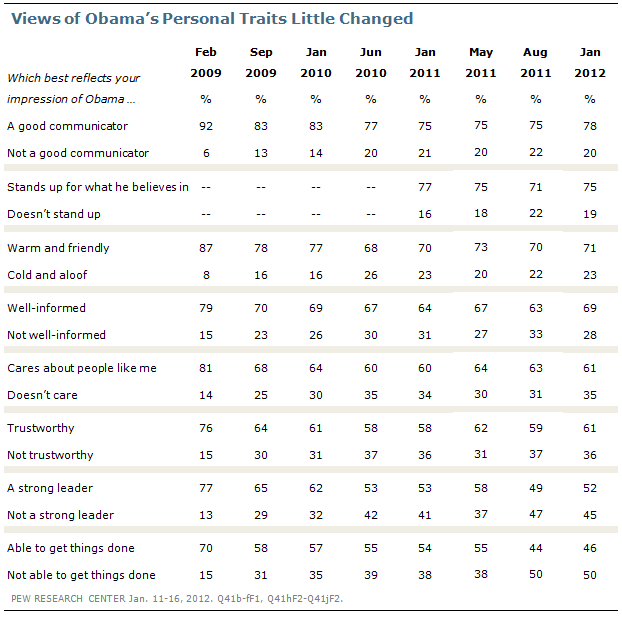 The percentage saying Obama is able to get things done also declined in August – to 44% from 55% in May and 54% in January 2011. Obama’s current rating for effectiveness also has changed little since August. 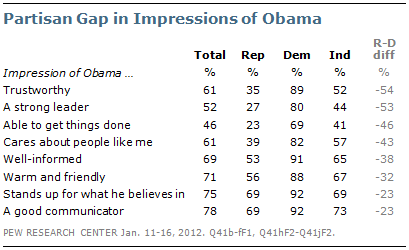 As in the past, there are wide partisan differences in views of Obama’s personal traits, particularly in perceptions of his trustworthiness and leadership. Nonetheless, while Republicans are less likely than Democrats to view Obama positively on all dimensions, majorities of Republicans say Obama is a good communicator, stands up for what he believes in, is warm and friendly and well-informed.

Majorities of independents also view the president positively on nearly every trait, with two notable exceptions. Just 44% of independents say Obama is a strong leader while about the same percentage (41%) says that he is able to get things done. 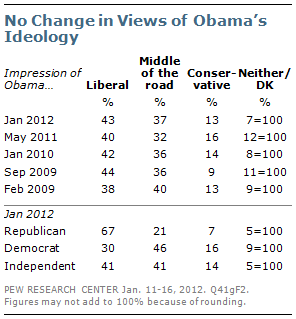 Perceptions about Obama’s ideology are divided and strongly related to party affiliation. Overall about four-in-ten (43%) say that Obama is liberal, while only somewhat fewer (37%) say he is “middle of the road” ideologically. Far fewer (13%) describe him as conservative. This pattern is essentially unchanged since the beginning of his presidency. 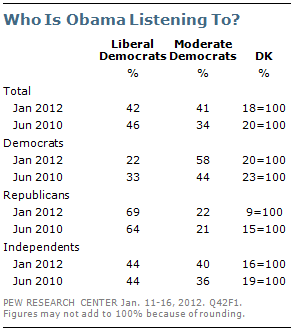 These ideological perceptions coincide with opinions about which segment of the Democratic Party – the liberal members or the moderate members – Obama is listening to more. Overall the public is divided evenly on this question: 42% say he’s listening more to liberal Democrats, 41% say moderate Democrats.

When asked what one word best describes people’s impressions of Barack Obama, the most frequent responses are Good (24 mentions) Incompetent (21), Intelligent (19), Socialist (17), Honest (16), Trying (16) and Disappointing (15). 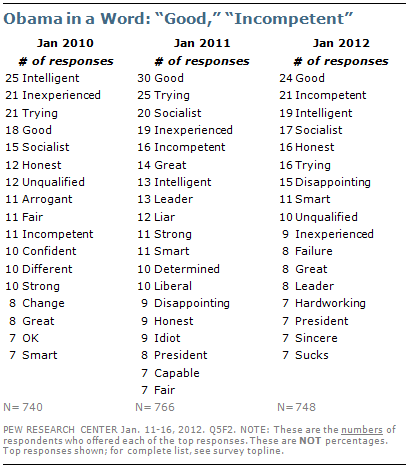 Some new words appear on this year’s list of one-word descriptions of Obama. Among positive descriptors, seven respondents describe Obama as Hardworking. Among negative words, Sucks appears for the first time; seven respondents used this word to describe their impression of the president.

Next: Section 2: Views of Congress
← Prev Page
Page1You are reading page2Page3Page4Page5Page6
Next Page →