Barack Obama’s favorability rating has slipped over the course of his first three years in office. But Michelle Obama continues to be 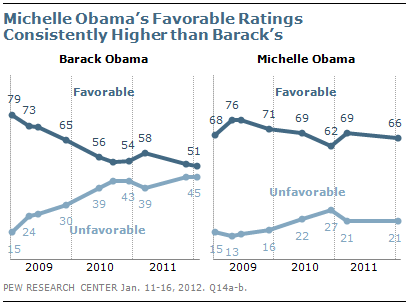 viewed very positively. Two-thirds (66%) of Americans say they have a favorable opinion of the first lady while just 21% have an unfavorable opinion. These views have changed little over the past year and are comparable to public evaluations when she became first lady roughly three years ago.

Currently, 51% say they have a favorable view of Barack Obama while 45% have an unfavorable view. Impressions of the president today are somewhat more negative than they were earlier this year, when he had a 58% favorability rating, but are similar to those he received on the eve of the 2010 midterm elections. 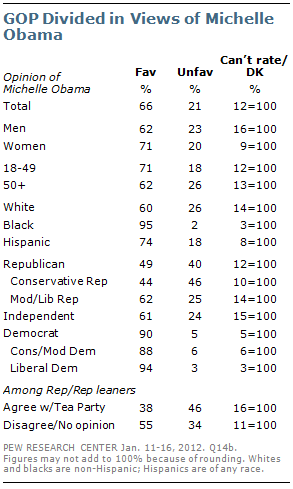 Although Barack Obama’s ratings are more negative than the first lady’s, the president remains very popular among many of the groups that were critical to his election in 2008: Democrats (86% favorable), liberals (79%), African Americans (92%) and Hispanics (64%). But among young people – who voted for him by a two-to-one margin in 2008 – Obama’s favorable rating is currently no higher than the national average (53%). 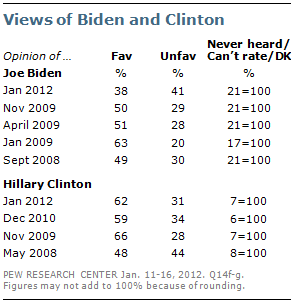 Biden’s favorable ratings have decreased across party lines. Currently, 64% of Democrats have a favorable opinion of the vice president, down from 77% in November 2009. The share of Republicans who have an unfavorable opinion of Biden has grown from 53% to 66% over the same time period. 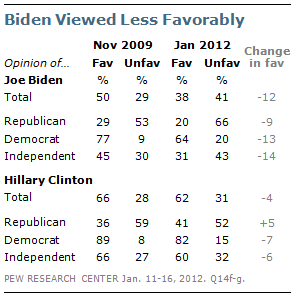 The public continues to view Hillary Clinton positively. Fully 62% have a favorable opinion of the current Secretary of State while half as many have an unfavorable opinion (31%). These numbers are little changed from a year ago, and Clinton has received positive favorability ratings for the past three years since she became Secretary of State. Both Democrats and independents overwhelmingly view her favorably – 82% and 60% respectively. Among Republicans, 41% view Clinton favorably and 52% view her unfavorably.