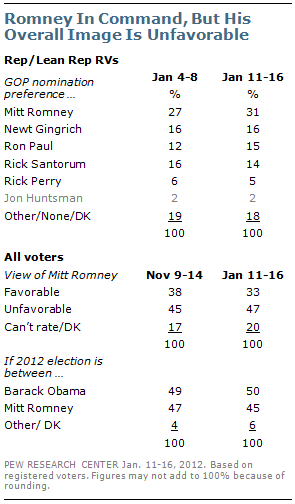 Days ahead of the South Carolina primary, Mitt Romney maintains a substantial lead nationally in the race for the GOP nomination. Yet his image among all voters has slipped since November and he runs no better in a general election matchup with Barack Obama than he did then, despite his advantage as the “electable” Republican candidate.

The latest national survey by the Pew Research Center for the People & the Press, conducted Jan. 11-16 among 1,207 registered voters, including 527 Republican and Republican-leaning independent voters, finds that Romney nearly doubles the support of his closest competitors for the Republican nomination.

Currently, 31% of Republican and Republican-leaning voters support Romney, compared with 16% for Newt Gingrich, 15% for Ron Paul, 14% for Rick Santorum and 5% for Rick Perry. The preferences of GOP voters are little changed since shortly before the New Hampshire primary.

Among all voters, however, Romney’s image is negative. In fact, slightly fewer voters have a favorable opinion of Romney than did so in November (33% now, 38% then); nearly half of voters (47%) say they have an unfavorable impression of the former Massachusetts governor.

Romney continues to run about even with Obama in a general election matchup, even though Obama’s job disapproval rating has edged up since December. Currently, 48% of the public disapproves of the way Obama is handling his job as president while 44% approve. Last month, 46% approved and 43% disapproved.

In a general election matchup, 50% of registered voters say they would vote for Obama while 45% support Romney. That is little changed from November (49% Obama, 47% Romney), and early October (48% each). 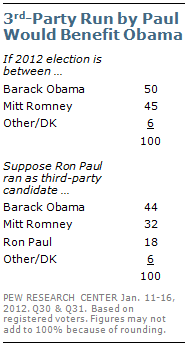 The survey finds that a third-party campaign by Ron Paul would clearly work to Obama’s advantage: In this scenario, 44% of registered voters say they would favor Obama, 32% would back Romney and 18% would back Paul. Paul has repeatedly said he is not contemplating a third-party run, but has not ruled it out. While most of Paul’s backing in a three-person race comes from independent voters, they are independents who disproportionately lean Republican. A Paul candidacy would also appeal to many conservative Republicans, siphoning votes from the core Republican base as well. 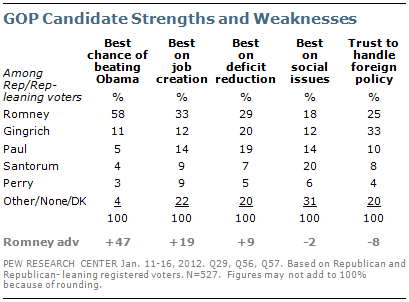 Republican voters have more mixed views of which candidate can best handle several key issues, although Romney has significant advantages on improving job opportunities (33% vs. 14% Paul, 12% Gingrich) and reducing the federal budget deficit (29% vs. 20% Gingrich, 19% Paul).

In addition, no candidate holds a significant advantage in dealing with immigration: 18% say Gingrich, 17% Romney, 14% Paul and 14% Perry. 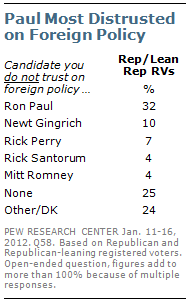 There is only one issue – foreign policy – on which a candidate other than Romney leads. A third (33%) of Republican and Republican-leaning voters say they trust Gingrich most to handle America’s foreign policy while 25% name Romney. Among GOP voters who agree with the Tea Party, Gingrich leads Romney 42% to 23%; Republican voters who disagree with the Tea Party or have no opinion of the movement are divided (27% Romney, 25% Gingrich). 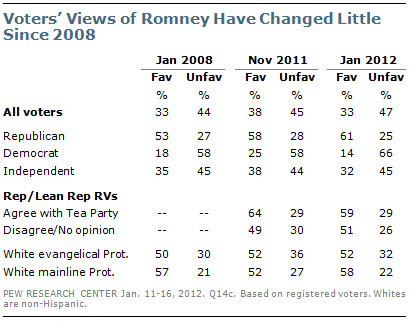 Mitt Romney’s gains in the GOP horserace have not been accompanied by an improvement in his personal image. Among all voters, his favorability rating has slipped since November, from 38% to 33%. That is primarily because of a decline among Democratic voters (from 25% then to 14% today).

Romney’s image has changed little among subgroups of Republican and Republican-leaning voters: 59% of GOP voters who agree with the Tea Party have a favorable opinion of Romney as do 52% of white evangelical Republicans; in November, comparable percentages of both groups viewed Romney favorably.

Going back even further to the 2008 presidential campaign, Romney’s favorability rating has not changed much. In January 2008, 33% of registered voters viewed him favorably and 44% said they had an unfavorable impression; that is little different from the current rating of 33% favorable, 47% unfavorable. 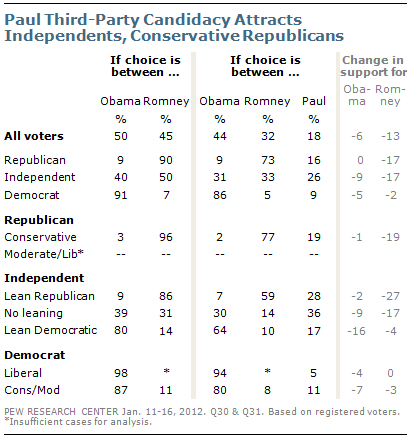 In considering a possible general election matchup between Barack Obama and Mitt Romney this fall, voters remain about evenly split in their preferences, with 50% saying they would vote for Obama and 45% for Romney.

But a third-party candidacy by current Republican candidate Ron Paul would attract support from nearly one-in-five voters and help Barack Obama’s reelection prospects significantly. In this hypothetical three-candidate race, 44% say they would back Obama, 32% Romney, and 18% Paul.

Not only does Romney lose more independent voters to Ron Paul than does Obama, but a Paul third-party candidacy also threatens to steal away some of the conservative Republican vote as well. Fully 96% of conservative Republicans say they would back Mitt Romney in a two-person race against Obama. But that support falls to 77% in a three-person race, with 19% saying they would switch to backing Ron Paul. There is no comparable loss of support for Obama among either liberal or moderate and conservative Democrats. 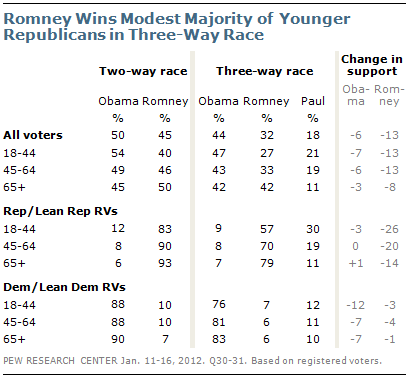 Among Republicans under 45, 30% would support Paul, shrinking Romney’s support to just 57% from 83% in a two-way matchup against Obama. Paul also would be a threat to take some of the 45-64 year-old Republican voters from Romney as well, but relatively few older Republican voters.

Ron Paul has substantially less pull on younger Democratic voters. Where he would appeal to 30% of Republicans and Republican leaners under age 45, he would draw the backing of just 12% of Democrats and Democratic leaners in the same age range.

Candidate SupportVoter Preferences2012 Election
Are you in the American middle class? Find out with our income calculator
Defining generations: Where Millennials end and Generation Z begins
Americans Fault China for Its Role in the Spread of COVID-19
Americans Who Mainly Get Their News on Social Media Are Less Engaged, Less Knowledgeable
25% in U.S. see at least some truth in conspiracy theory that COVID-19 was planned