Another way to examine attitudes across media outlets is to look at the relationship between the ideological profile of the audience of each outlet and where people think it falls on the left-right spectrum (o-to-6 scale). The majority of the 64 outlets included in this study (eight outlets in each of the eight Western European countries) have audiences that tend to cluster around the ideological center. However, differences emerge when looking at where people who have heard of the outlets place them on the same left-right spectrum. In most cases, people’s perception of the left-right ideological orientation of a news outlet is more partisan than the profile of the outlet’s actual audience.

In part, this difference is due to the fact that those who use an outlet are more likely to see that outlet as being closer to their own left-right ideological leanings. 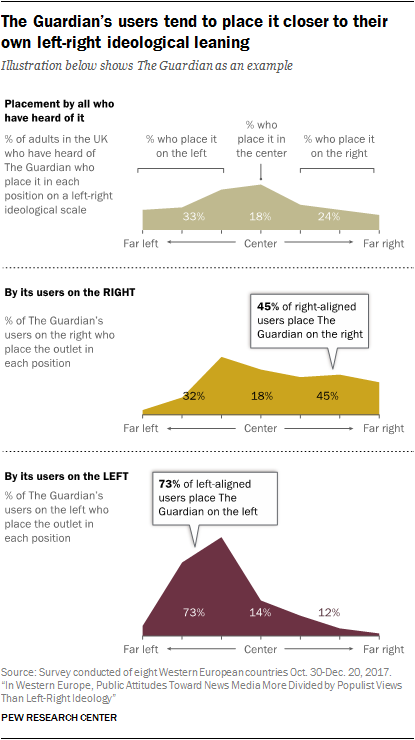 In addition to examining the audience’s ideological composition for eight outlets in each country, the study also asked people who have heard of the outlets where they think each falls on the left-right ideological scale, where 0 represents the far left and 6 represents the far right. The results show that where people place an outlet is tied very closely to their own ideology, as well as their use of that outlet for news.

For many outlets, news users on either the left or the right tend to think the outlet is closer to their own left-right ideological leaning. This comes through most strongly in the UK, Italy, Denmark, France and the Netherlands. The pattern is less prominent in Germany, Sweden and Spain.

For example, in the UK, 98% of British adults have heard of The Guardian. Among those who have heard of the newspaper, 33% place the outlet on the left side of the ideological scale (0-2) and 24% place it on the right side (4-6).

Unlike users, non-users tend to perceive outlets as being farther away from their own left-right ideological leaning. For example, while 32% of French non-users of BFM on the right think BFM is also on the right, 50% of left-aligned non-users think the outlet is on the right. 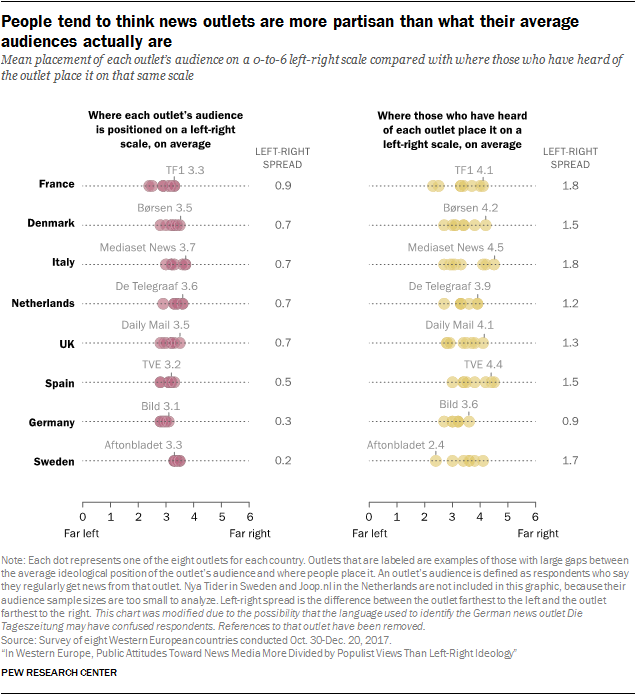 Next: 4. Most Western Europeans trust public broadcasters, but those who hold populist views less so
← Prev Page
Page3You are reading page4Page5Page6Page7Page8Page9Page10Page11Page12Page13
Next Page →