In addition to the open-ended question about people’s main news source, the survey also asked respondents a series of questions (including those about trust) about eight specific outlets in their country, allowing for a deeper understanding of how individuals feel about their news options. The eight specific news outlets for each country were identified in a way that aimed to be familiar to respondents. Therefore, in some cases, the eight outlets asked about are more specific publications or outlets within broader news organizations discussed in the main news source section. For example, in France the survey asked specifically about the television news channel France 2, which is part of the larger France Télévisions (France TV) family of channels. For each of the eight outlets, respondents were first asked if they had heard of the outlet, and if they had, they then were asked if they trusted or distrusted it.

In all but one of the countries surveyed, the public news organization listed among the eight news outlets receives the highest level of trust. The exception is Spain, where even though a majority trusts the public broadcaster, Televisión Española (TVE), more people trust the private television outlet Antena3.

As with trust in the news media generally, political divides in trust of specific outlets emerge more consistently along populist views than along the left-right ideological spectrum. Across all eight countries, people who hold populist views tend to express lower levels of trust in specific news outlets than those who don’t hold populist views.12 However, in the three southern countries – France, Italy and Spain – left-right ideology plays as large a role, or larger, as populism in trust levels in specific outlets.13

To gain a deeper sense of how individuals in each country feel about their news options, the survey asked about trust in eight specific news outlets. Respondents were first asked if they had heard of each outlet, and if they had, they then were asked if they trusted or distrusted it. (See Appendix A for more information on how the eight outlets were chosen.)

Spain, however, stands apart. While a majority of Spaniards (57%) say they trust the public broadcaster Televisión Española (TVE), 64% say the same about Antena3, a private television station owned by Atresmedia.

Private television broadcasters also garner high marks, even if not as high as public news organizations. In seven of the eight countries surveyed, at least half of the public say they trust these outlets, ranging from a high of 81% in Sweden for TV4 to 55% for Sky in the UK. Only in Germany is trust in private television outlets relatively low; roughly four-in-ten Germans say they trust RTL (39%) and Sat1 (43%). 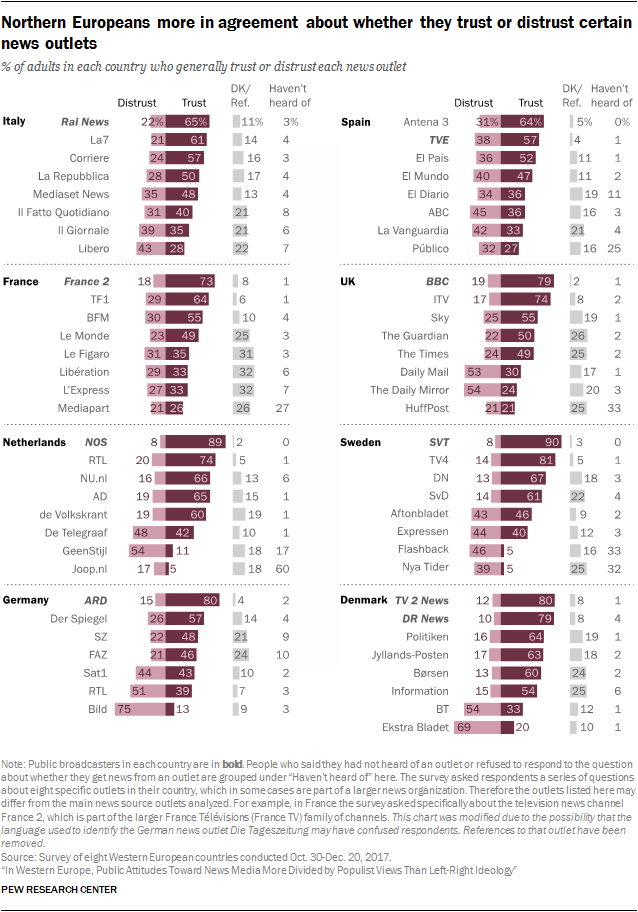 Populist views relate to trust in media in all countries; left-right political ideology matters more in the south than the north

Across the eight countries14 surveyed, populist attitudes are strongly associated with trust in specific outlets. For most outlets asked about in each country, those who hold populist views express lower levels of trust than those without populist views. The largest differences occur in Spain, Germany, the UK and the Netherlands, where those with populist views are about 30 percentage points less likely than those with non-populist views to say they trust TVE, Frankfurter Allgemeine Zeitung (FAZ), The Times, and de Volkskrant, respectively. When it comes to public news organizations, Spain stands out as having the largest gap in trust between populists and non-populists (see Appendix D for detailed tables of differences in trust by populist views).

The only two outlets of the 64 asked about where populists display significantly higher trust than non-populists are Nya Tider in Sweden (which 4% of Swedes use weekly) and Mediaset News in Italy (which 56% of Italians use weekly).

In the southern countries, however, trust is divided along the left-right ideological spectrum – ­­ and these differences are as large, or larger, as those based on populism. For example, in Italy, those who place themselves on the left of the 0-to-6 ideological scale are 21 percentage points less likely to trust Il Giornale than people on the right. But for this same outlet, there is no significant division between those with and without populist views. 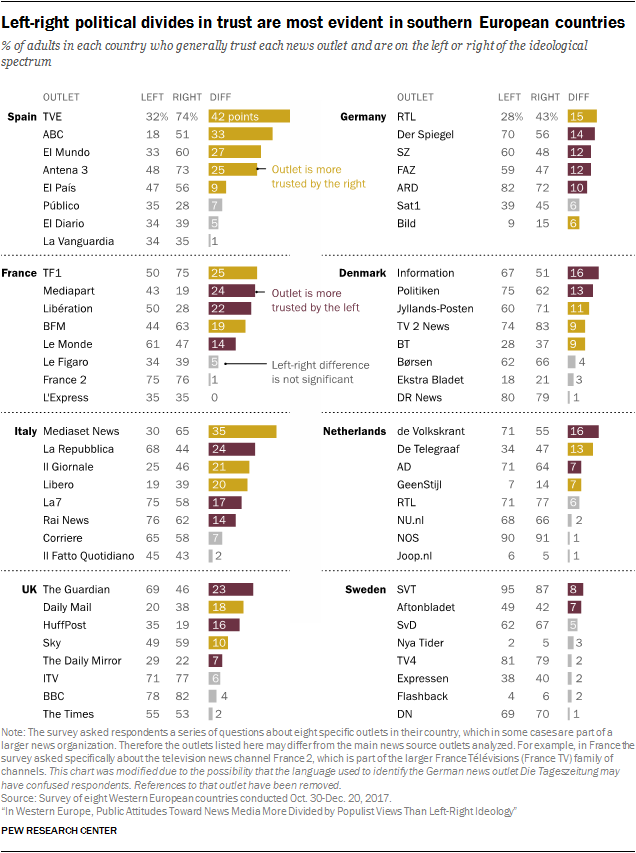 Next: 5. Many Western Europeans get news via social media, but in some countries, substantial minorities do not pay attention to the source
← Prev Page
Page3Page4You are reading page5Page6Page7Page8Page9Page10Page11Page12Page13
Next Page →

In Western Europe, Public Attitudes Toward News Media More Divided by Populist Views Than Left-Right Ideology 1. Populist views, more than left-right identity, play a role in opinions of the news media in Western Europe 2. Southern European countries more fragmented in news sources, but for nearly all countries, top main source is public, not private 3. News outlets are less politically polarized than Western Europeans perceive
4. Most Western Europeans trust public broadcasters, but those who hold populist views less so
Public broadcasters generally more trusted than other outletsPopulist views relate to trust in media in all countries; left-right political ideology matters more in the south than the north
5. Many Western Europeans get news via social media, but in some countries, substantial minorities do not pay attention to the source Acknowledgments Methodology Appendix A: How news outlets were selected in each country Appendix B: About the focus groups Appendix C: How this study measures populism Appendix D: Detailed tables Appendix E: References