Overall, news consumption ranks high on mobile devices. Over a third report getting news daily on the tablet and the smartphone, putting it on par with other activities such as email and playing games on tablets and behind only email on smartphones. The popularity of news remains strong across all demographic groups studied, but is especially prevalent among men and the college educated. On the smartphone, differences also emerge in age and income.

Age, on the other hand, seems to be less of an indicator of mobile news consumption. This is particularly true on the tablet, where daily rates are similar across all four age groups studied (50- to 64-year-olds are a bit more likely than the youngest and oldest groups to get news). On the smartphone, owners under 50 get news at higher rates than those over 50.

The survey delved deeper into more specific news habits on mobile devices. A majority of consumers across the various demographic groups check news headlines regularly on their devices, but other consumption habits vary.  Age, often in combination with gender, plays a substantial role. But in many cases 30- to 49-year-olds are in sync with those under 30. The split, then, appears between those under 50 and those 50 and older. 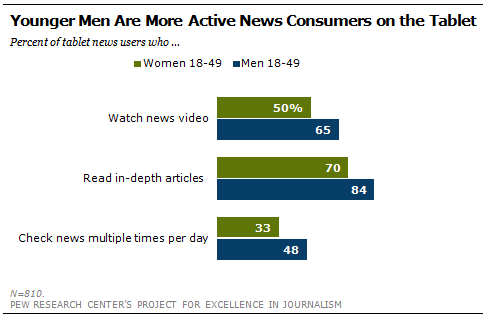 On the smartphone, age also emerges as an indicator of in-depth reading habits, but gender does not. Women under 50 are as likely as men of that age group to read in-depth articles on the phone.  (Again, perhaps a sign of the comfort level younger users have with smaller screen reading.)

Another type of news consumption made more available through apps and other mobile technology is the reading of back issues of magazines. On the tablet, this practice is more popular among younger news users. Nearly a third, 32%, of those under 50 sometimes read articles from previous issues of magazines compared with just 20% of those who are 50 or older.

Technical advances in the last year have also enabled more watching of news-rather than just reading-on mobile devices. Again, on both smartphones and tablets those under 50 show a greater tendency to watch news videos-and on the tablet men do so more so than women. 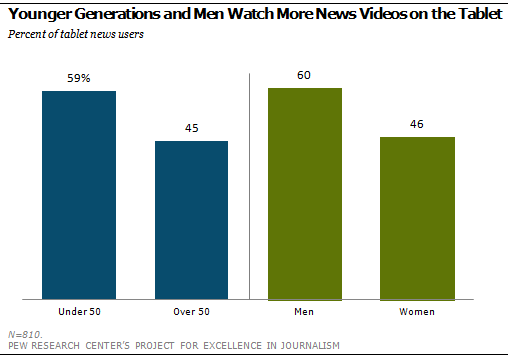 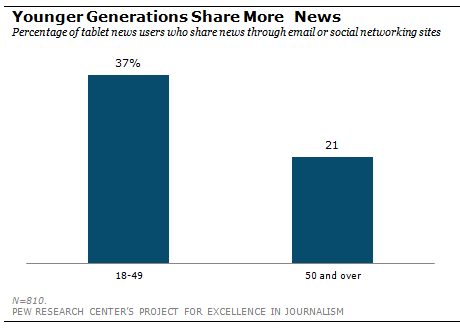 Next: App vs. Browser Use
← Prev Page
Page1You are reading page2Page3Page4Page5Page6Page7Page8Page9
Next Page →