One of the biggest questions surrounding mobile technology-especially tablets-is whether it will open up new revenue opportunities to support the news gathering and reporting in ways that did not occur in on desktops and laptops.  One rationale is that the pleasure and convenience of reading on a mobile device might induce people to pay for that content. And ads in this space, with higher resolution and potential for greater interactivity, might be received differently than on the desktop.

The October report revealed that the broadening of the tablet universe has not made people more likely to pay for content. But there did seem to be more response to advertising in this news space than in the desktop realm. While still limited, 49% of tablet news users say they notice ads at least sometimes when getting news, and 14% at least sometimes touch or click on those ads. That raises the question then of whether certain demographic groups are more likely to respond than others. 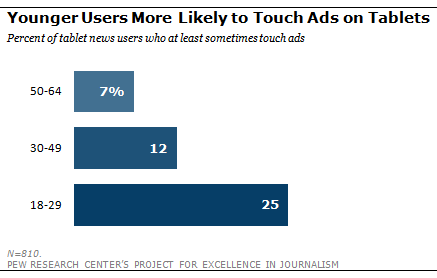 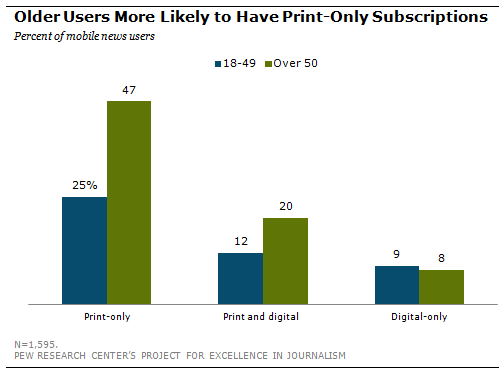 Another area of revenue potential is subscription fees. With roughly 300 newspapers now charging some kind of fee for digital content, the industry is clearly moving in this direction.

One group that stood out for being more inclined to spend money via their tablet was those who have a mobile data plan and therefore have paid to have access the internet anytime and anywhere. They account for only about a quarter of all tablet owners (26%) but are more likely to have every kind of subscription – print-only, bundled and digital only.  But according to this data, the young – active in so many other ways – are the least likely age group to have a data plan. Just 14% of tablet news users under 30 have data plans, compared with at least twice that for other age groups.

Next: Other Mobile Activities
← Prev Page
Page1Page2Page3Page4You are reading page5Page6Page7Page8Page9
Next Page →