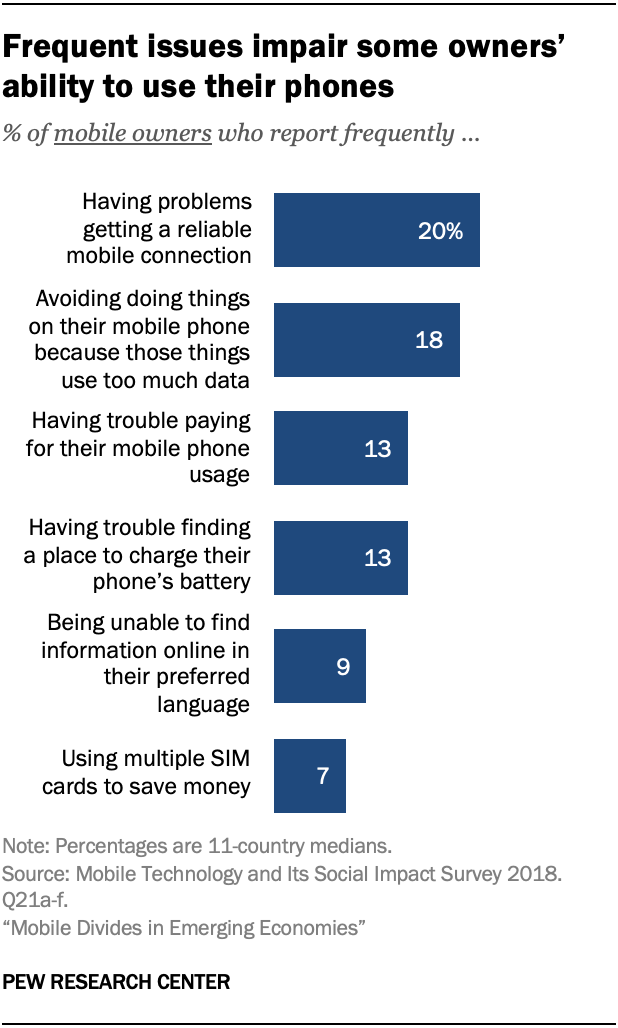 While phone owners clearly have overcome one major obstacle with regard to using technology – namely, they have their own devices – many nonetheless regularly encounter difficulties using their phone to its fullest capacity. Most notably, phone owners are routinely affected by connectivity-related and financial challenges.

Problems getting reliable mobile coverage is one of the most common issues cited by phone owners, but few cite poor network coverage as a frequent issue. An 11-country median of 72% say they have had at least some challenges getting reliable mobile connection, but only a median of one-in-five (20%) experience this issue frequently. When it comes to financial hurdles, a median of 62% say they have limited their activity on their phone to conserve data at some point, and nearly as many (median of 58%) have had issues paying for their phone use. Phone owners are somewhat less likely to face issues related to language, though this, too, can affect some phone owners. 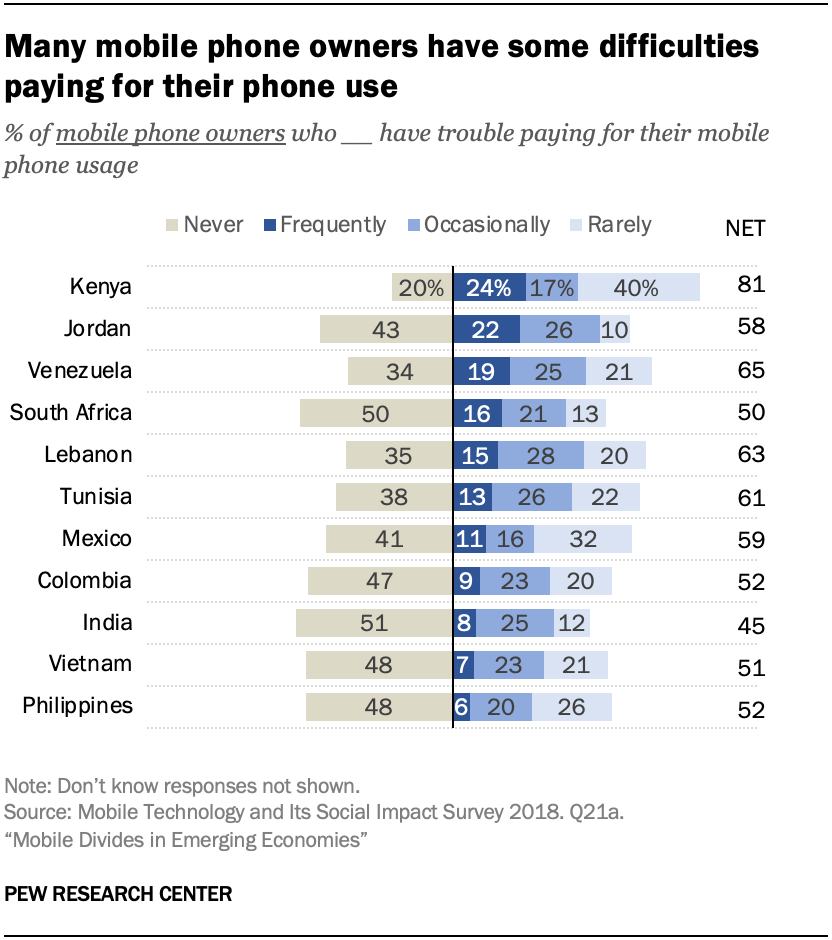 When you know you will come into some money in the week, you can borrow that 500 and use it on data and then replace it. You are forced to go beyond your budget. Female, 35, Kenya

For many mobile phone owners, the cost of data can present real difficulties. A median of 48% say they have not had enough money to pay for their mobile data over the past year, ranging from a high of 58% in Kenya to a low of 22% in Vietnam. In most countries, this was comparable with the percentage of mobile phone owners who had difficulty paying for other necessities whether it be food, health care or clothing. For example, Colombians are about as likely to say they had trouble paying for mobile data over the past year (48%) as to say they had trouble affording food (50%) and health care (48%), despite the differing costs of these various necessities. 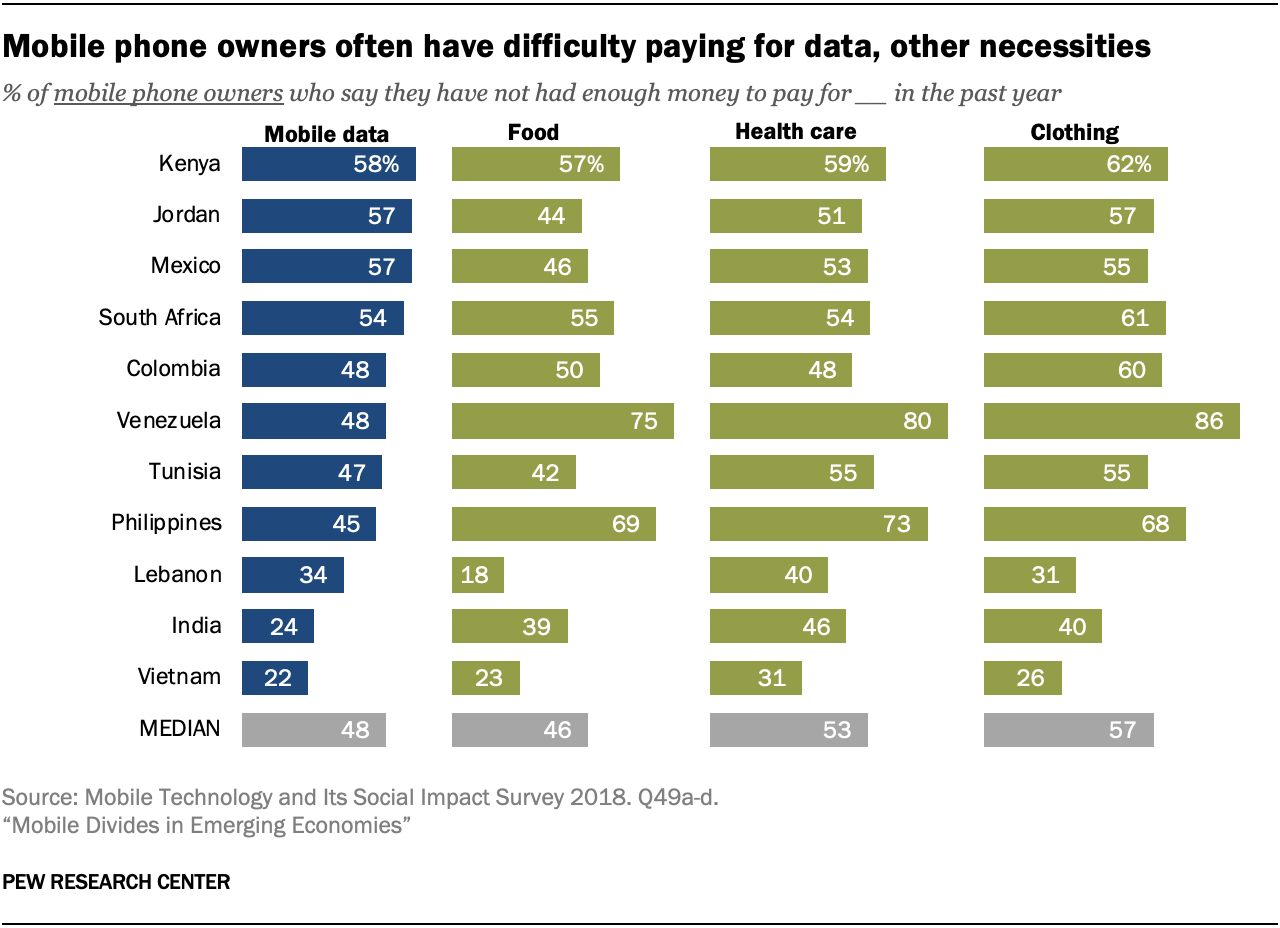 But, in two countries – the Philippines and Venezuela – many fewer mobile phone owners had difficulties paying for data than the other necessities asked about. In the Philippines, this may reflect the relative affordability of mobile data and free access to Facebook via Facebook Basics, coupled with the country’s recovery from a typhoon.

In Venezuela, where the International Monetary Fund calculates the 2018 inflation rate to be a whopping 65,370%, three-quarters or more say they had times over the past year where they had difficulty affording food (75%), health care (80%) or clothing (86%), while far fewer say the same about data (48%). As in the Philippines, Venezuela has relatively inexpensive data, with one of the most popular plans running for 100 bolivars ($0.15) per month on the black market. 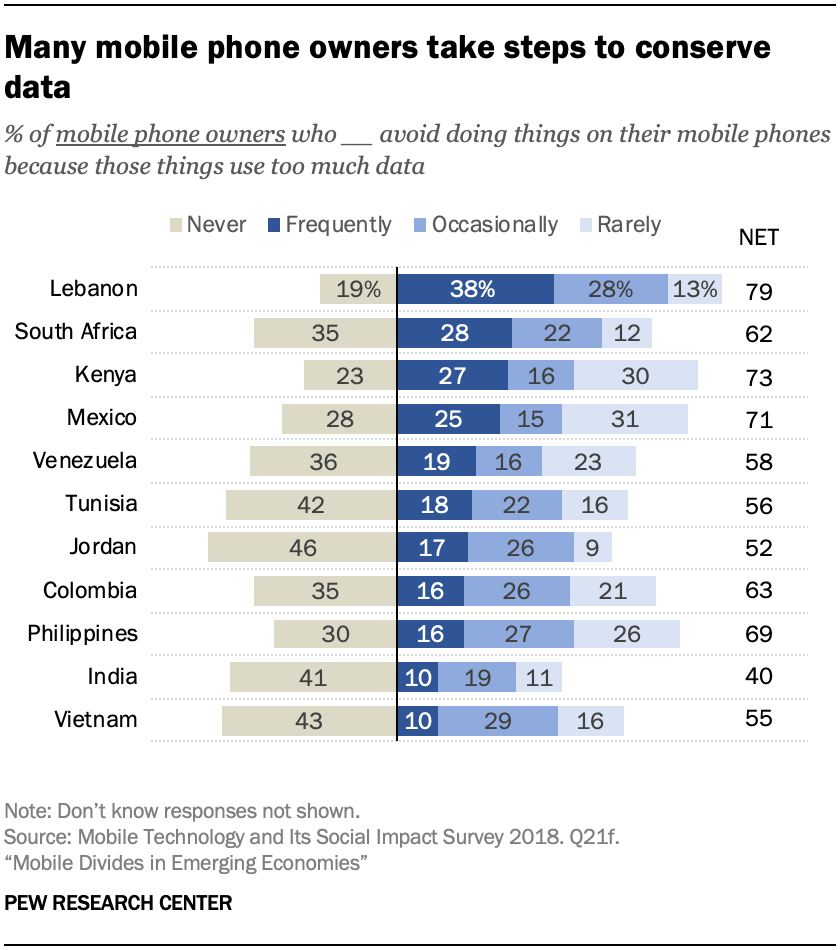 Owning a mobile means money, you might not be able to afford, both in terms of the device and of the service, you ought to pay. Since I’m only devoted to my family, I’d only reach them if I must, and if I’m to be reached, I’d rather I got those through my landline. Woman, 42, Mexico 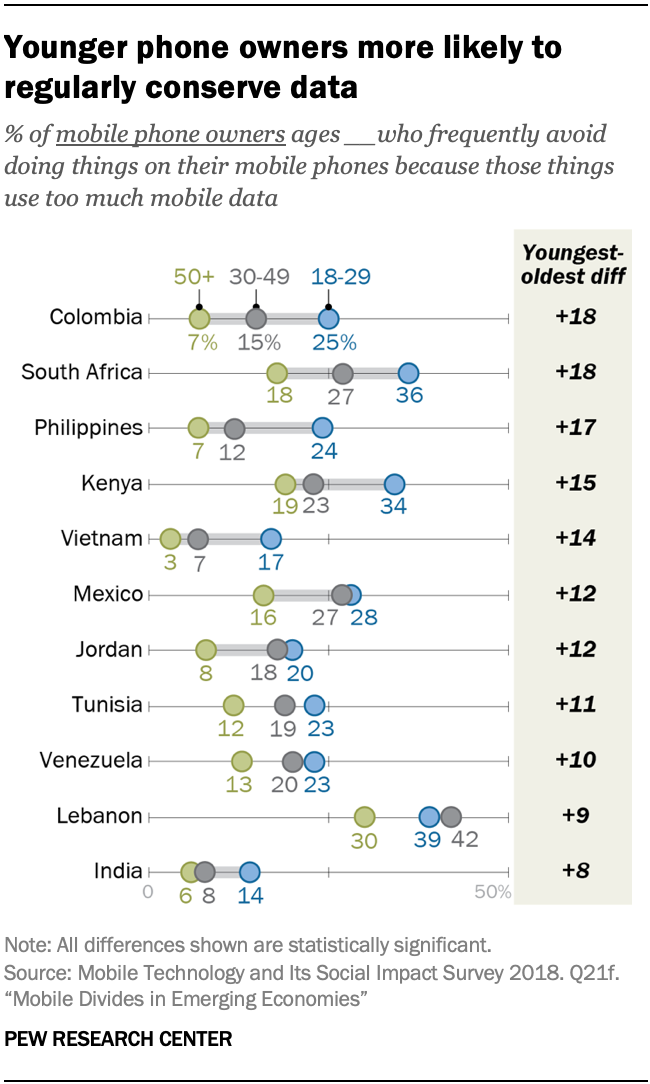 In all countries surveyed, younger phone owners are more likely to frequently conserve their data than older phone owners. For example, in Colombia, 25% of those under 30 say they regularly limit activity on their phones to conserve data, compared with 7% of those ages 50 and older.

Financial constraints may also lead some mobile phone owners to use multiple SIM cards as a way to save money, whether by taking advantage of discounts offered by different companies or to ensure that they are communicating with people on other networks as cheaply as possible.

For example, in focus groups in the Philippines conducted by Pew Research Center, participants detailed the exact benefits offered by different companies such as TM, Smart and Globe and described using each SIM for particular promos and savings (see Appendix A for more information on the focus groups). In another group, a Kenyan participant who used multiple SIMs described doing so to maximize coverage in different areas of the country. 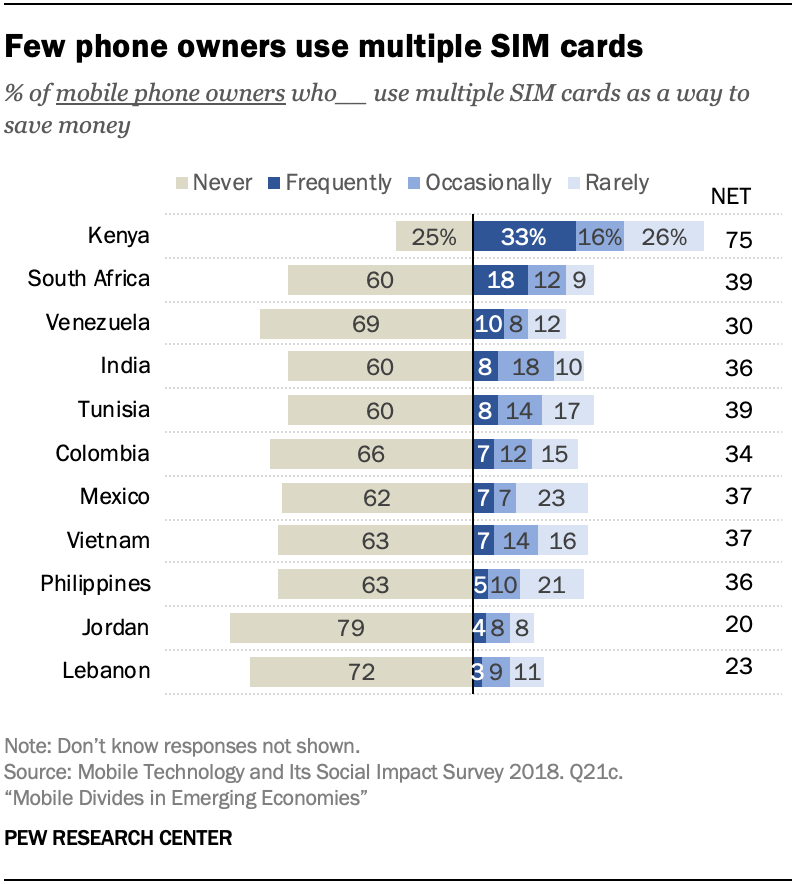 In some countries, younger people, men and more educated people are also more likely to use multiple SIMs to save money, suggesting that this cost-effective method may also require some technological savvy and know-how.

My sister had a problem, somebody used her identity and she had problems with her fiancée. Some people had problems because some other people are using their identity. Woman, 25, Tunisia

Mobile connectivity is an obstacle for many phone owners 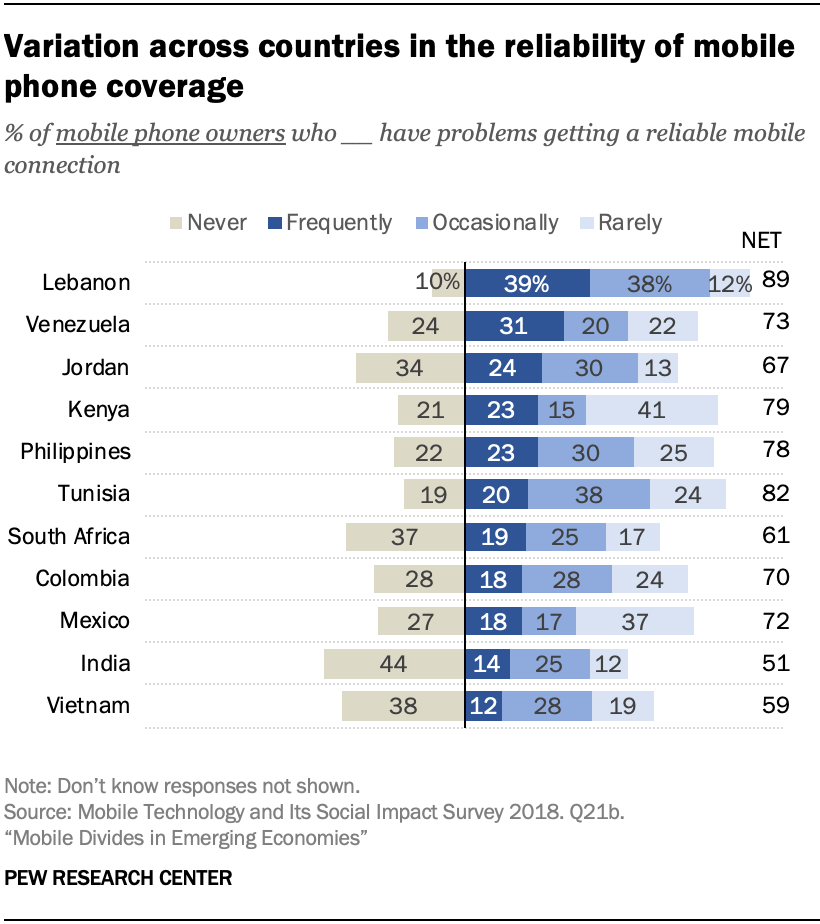 Many mobile phone owners report connectivity issues in using their devices. A median of 20% say they frequently have problems getting a reliable mobile connection. However, there is substantial variation across countries, ranging from highs of more than three-in-ten in Lebanon (39%) and Venezuela (31%) to only around one-in-ten in Vietnam (12%) and India (14%).

And, when it comes to experiencing these types of connectivity issues in general, a much greater share say they have had at least some trouble getting reliable coverage, even if it has been rare. A median of 72% report ever having difficulties with reliable connections, while only a minority in most countries say this has never happened to them (median of 27%).

I’d be more concerned [about battery use] because it’s not something you can fix right away. You need either to wait until you get home or ask someone for a charger. Woman, 46, Mexico 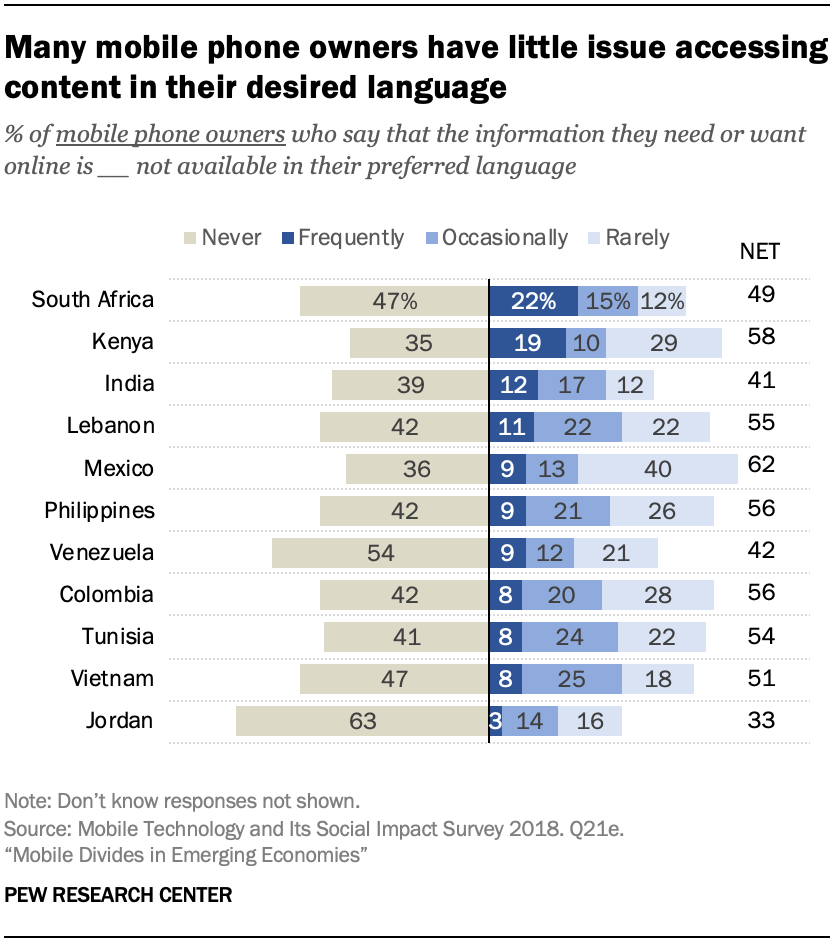 While people can use their phones and the internet in many languages, those who speak less-commonly spoken languages or whose primary languages are infrequently written may face challenges finding content they want online. Moreover, much information on the internet is in English or in a few other – primarily European – languages.

However, most mobile phone owners in these 11 emerging economies are, nonetheless, able to find information in their desired language. A median of only 9% report frequently being unable to access information they want in their preferred language. Less frequent difficulties do occur, though; in eight of the countries surveyed, around half or more have, at some point, experienced issues finding information online in their language of choice. 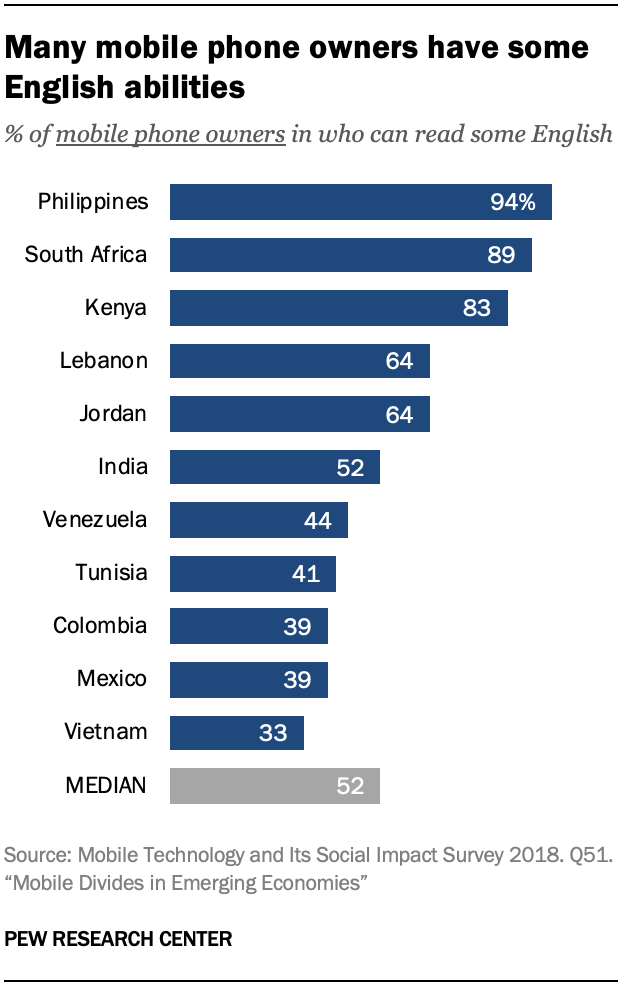 In South Africa and Kenya, around two-in-ten phone owners say they frequently have trouble finding information in their language of choice. In Kenya, while 83% say they can read at least some English, when given the choice during fieldwork, more than half (53%) of mobile phone owners opted to be interviewed in Swahili, suggesting they may be dominant in languages that are less common online.

In South Africa, too, English-reading ability is relatively widespread among phone owners (89%), yet many phone owners may prefer content in other languages, including Zulu, North Sotho, Xhosa, SeSotho or Afrikaans – some of the languages used during fieldwork.

Next: 4. Obstacles to using phones
← Prev Page
Page1Page2Page3You are reading page4Page5Page6Page7Page8Page9Page10Page11
Next Page →

Mobile Divides in Emerging Economies 1. Non-mobile phone users: What hinders their access? 2. Phone sharers: What limits their mobile use?
3. Mobile owners: What they struggle to do
Finances a major hurdle to using phones for many mobile phone ownersSecurity concerns are widespread among mobile phone owners, particularly more affluent onesMobile connectivity is an obstacle for many phone ownersPhone owners have few issues finding online content in their language
4. Obstacles to using phones Acknowledgments Methodology Appendix A: About the focus groups Appendix B: How the hardship scales were created and coded Appendix C: Co-occurrence rates for each country Appendix D: Older people, more affluent tend to have fewer hardships using mobile devices