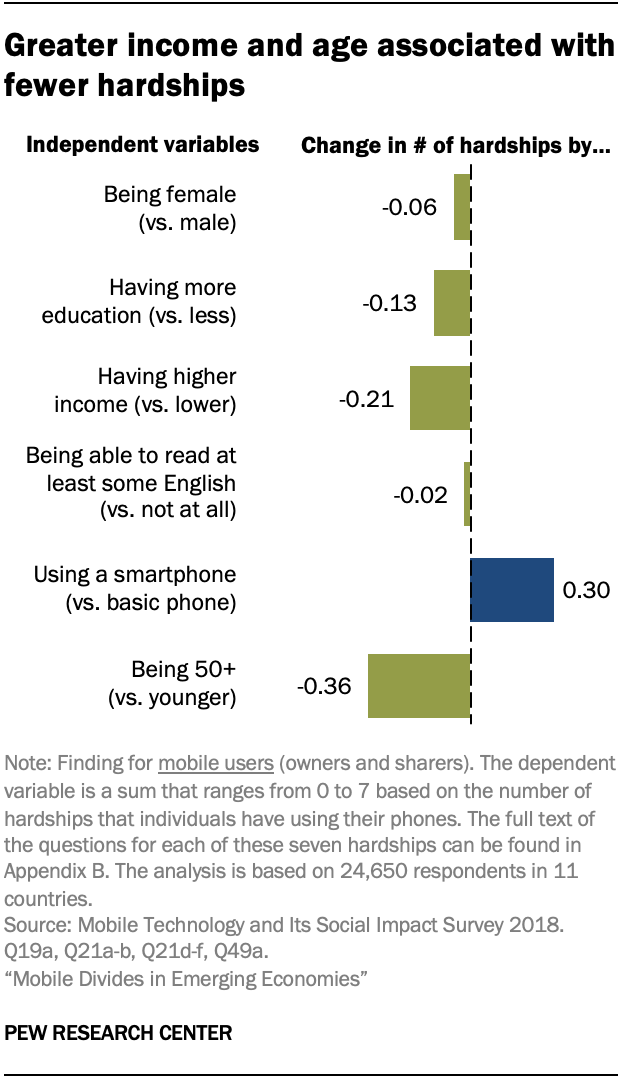 In this report, we explored demographic differences associated with mobile phone use and hardships. To do this, we used a hierarchical linear regression to predict the total number of hardships people experience, controlling for other factors that affect mobile phone use.

We used Stata’s mixed function to estimate a weighted, mixed-effect linear model with random intercepts by country and robust standard errors. In addition to this pooled model, we evaluated the robustness of the results by estimating the model for each country separately. These country-specific models yielded similar conclusions.

The number of hardships people experience serves as the dependent variable. We created a scale that counts the number of hardships mobile users (owners and sharers) report experiencing out of seven possible hardships: frequently experiencing poor service coverage, frequently having trouble finding a place to charge their phone, frequently having trouble affording data, frequently avoiding doing things on their phones in order to save data, not having enough money to afford data at some point in the last year, frequently struggling to find content in their preferred language and being very concerned about identity theft. Scores ranged from zero (reported no hardships) to seven (reported all of the hardships). The independent, or predictor, variables include gender, age, income, education, English literacy and phone type.

Overall, we find that gender, education and being able to read at least some English are not significantly related to the number of hardships mobile users experience. Higher income is associated with a decrease in the number of hardships experienced. Conversely, using a smartphone is associated with more hardships. Holding other demographics factors constant, being older is associated with fewer hardships. Adults age 50 and older experience .36 fewer hardships accessing mobile phones than younger adults. These findings suggest that the age differences seen in other chapters in the report are not due solely to income, educational or phone-type differences.

Mobile Divides in Emerging Economies 1. Non-mobile phone users: What hinders their access? 2. Phone sharers: What limits their mobile use? 3. Mobile owners: What they struggle to do 4. Obstacles to using phones Acknowledgments Methodology Appendix A: About the focus groups Appendix B: How the hardship scales were created and coded Appendix C: Co-occurrence rates for each country
Appendix D: Older people, more affluent tend to have fewer hardships using mobile devices