While myriad factors affect why people don’t own or use mobile phones, a few key ones stand out. First, non-mobile phone users tend to be put off by the cost of owning mobile phones – and, particularly, the cost of the device itself, more so than the cost of data. Second, many non-users see limited value to mobile phones for their lives. Linguistic difficulties and technological literacy also affect non-users, though at somewhat lower rates. Non-users are also concerned about the security of mobile phones and the sensitive information they contain.

And, while majorities of non-users would like to own a phone in some countries surveyed, non-users elsewhere are content to continue without digital connectivity.

The share of mobile phone non-users varies in emerging economies 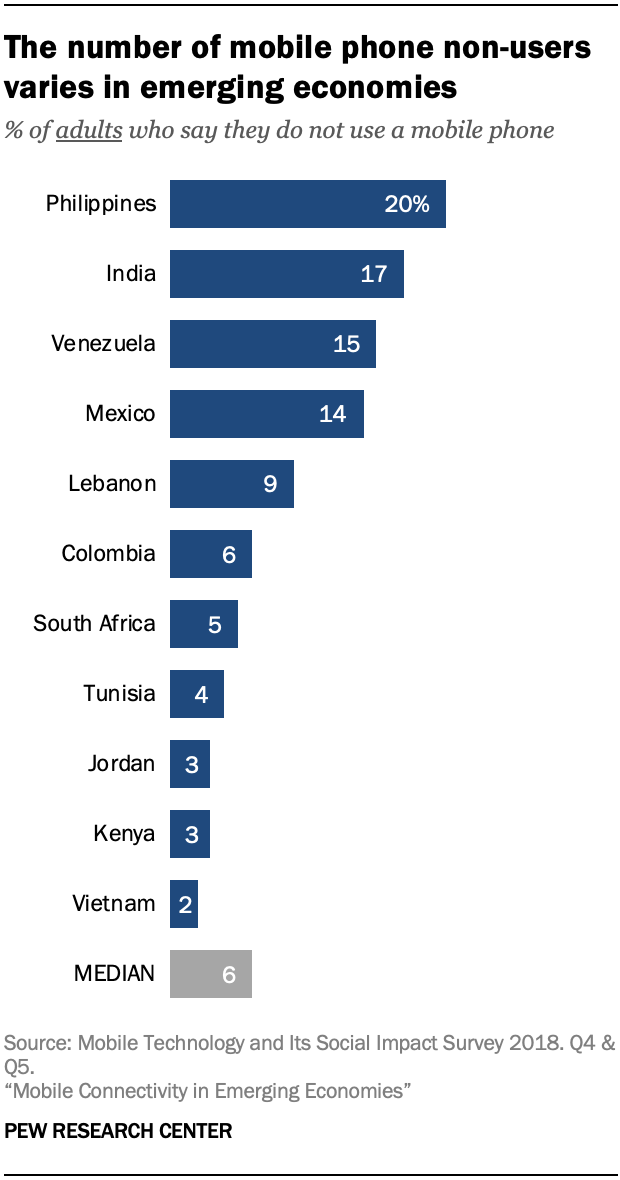 Across the 11 countries, a median of 6% say they neither own their own mobile phone nor regularly use someone else’s device. Nonuse varies across these countries – ranging from a low of just 2% in Vietnam to a high of 20% in the Philippines.

Nonuse tends to be more common among adults with lower levels of income and education.1 In the Philippines, for instance, 10% of people with more education say they do not use a phone, compared with 38% of those with lower levels of education. This pattern exists in all 11 countries surveyed. Similarly, across most nations surveyed, older people are more likely than younger to be non-users.

Given that mobile phone use is relatively common, the main analysis in this chapter involves only the eight countries where there are sufficient sample sizes (about 100 mobile phone non-users or more) to allow for additional analysis of non-users’ experiences.

Multiple factors contribute to why people don’t use mobile phones

In each country, mobile phone non-users were asked whether each of 12 factors was part of the reason they do not use a mobile device. These factors ranged from issues related to cost – whether of data or the device itself – to issues of digital literacy or linguistic difficulty, among others. If non-users mentioned that more than one of the 12 factors played into their decision not to use a phone, they were also asked which of those they had named was the top factor hampering their use. 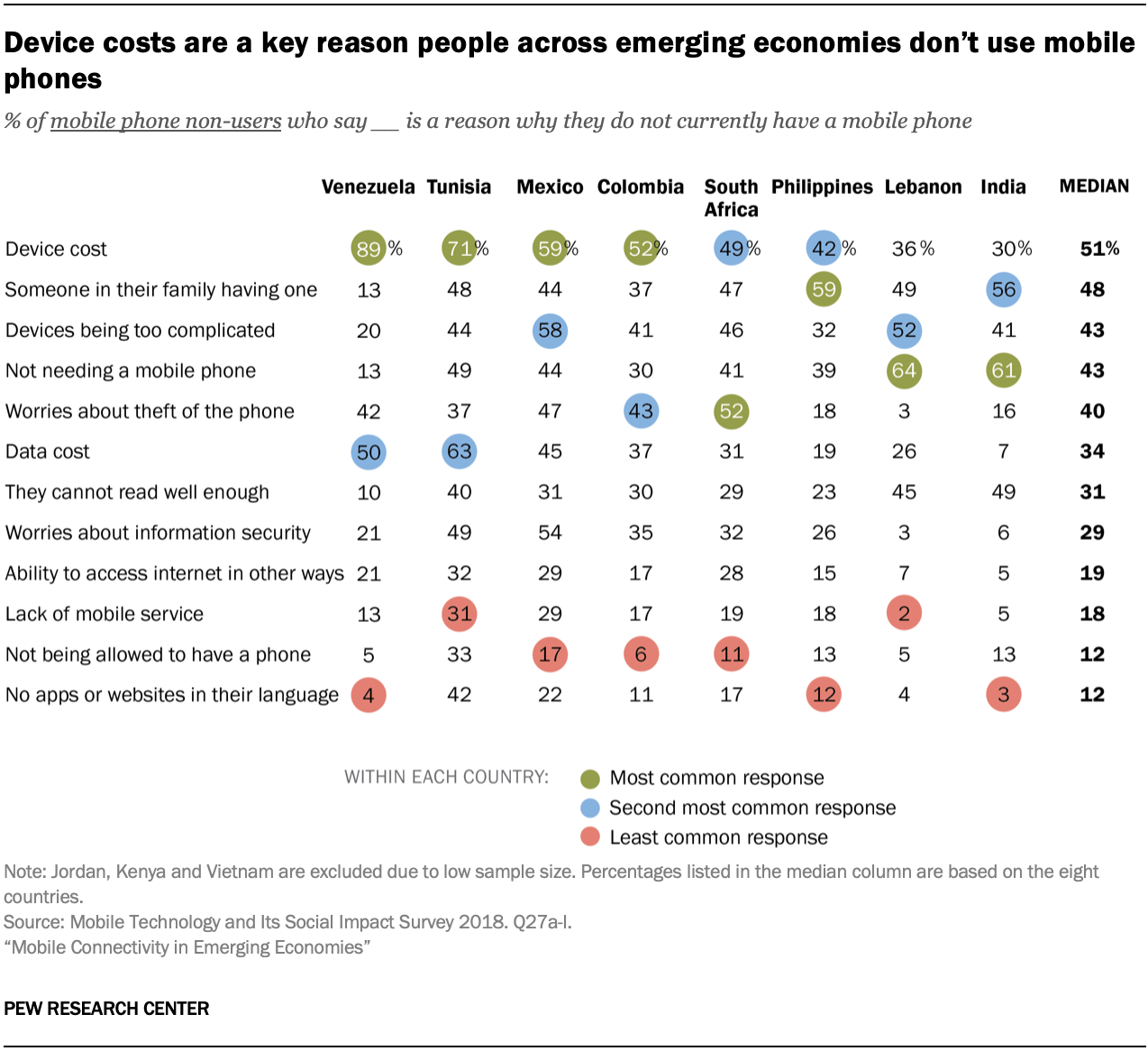 Results indicate that, while myriad factors have an impact on people’s decisions not to use phones, financial constraints are key. Across the eight countries with a sufficient sample size to analyze, a median of 51% say the cost of a mobile device is a reason they do not own a mobile phone. Among those who gave multiple reasons that they did not use a phone, device cost also is the top reason people cite for not owning a mobile device (a median of 17% of non-users across eight countries). A median of 34% also say data costs are a factor in why they do not use a mobile phone, though a median of only 5% say this is their top reason.

The cost of the device itself most concerns non-users 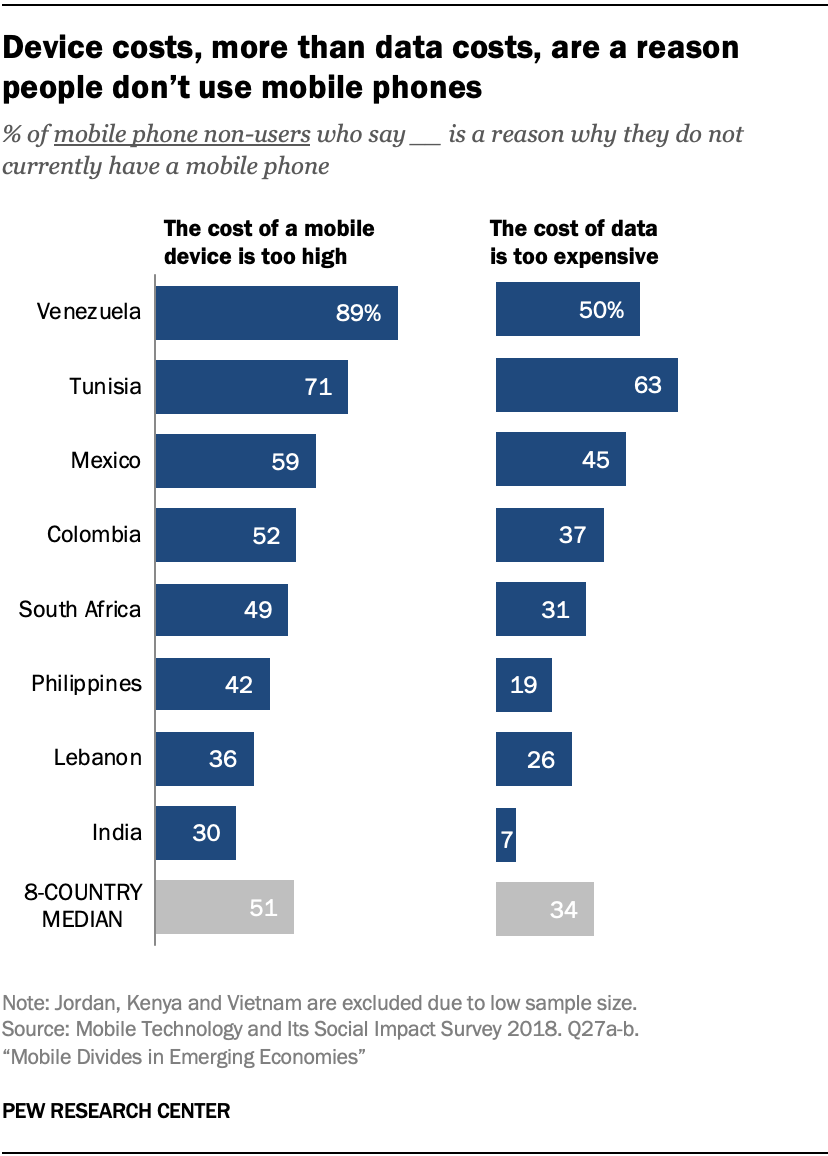 In five countries, around half or more mobile phone non-users say device costs are a reason they do not own a mobile phone. This ranges from a low of 30% who cite device costs as an issue in India to a high of 89% in Venezuela.

For most non-users, the cost of data is less of a concern. In Venezuela, for example, while around nine-in-ten (89%) see device costs as prohibitive, half say the cost of data is a reason they don’t use a device. While the relative gap between device and data costs may be smaller in other countries, more people in each country say device costs are a hurdle to ownership than say the same of data costs.

However, when it comes to identity theft in general, about nine-in-ten Mexican (91%), Colombian (89%) and Venezuelan (87%) non-users say they are at least somewhat concerned. In all of these countries, two-thirds or more say they are very concerned about the general possibility of identity theft.

In five countries, around half or more say they do not have a mobile phone because someone else in their family does. In contrast, few non-users say they do not use mobile phones because they have other means of accessing the internet; a median of only 19% across the eight countries say this.

Reported lack of need for mobile connectivity is highest among non-mobile phone users in Lebanon (64%) and India (61%); in most countries, around a third or more of non-users cite this as a reason. Only in Venezuela, where rapid inflation has left large swathes of the country in dire poverty, do few non-users (13%) report that not needing a device contributes to them not using one. Similarly, 89% of Venezuelans report device costs as a reason why they do not currently have a mobile phone. 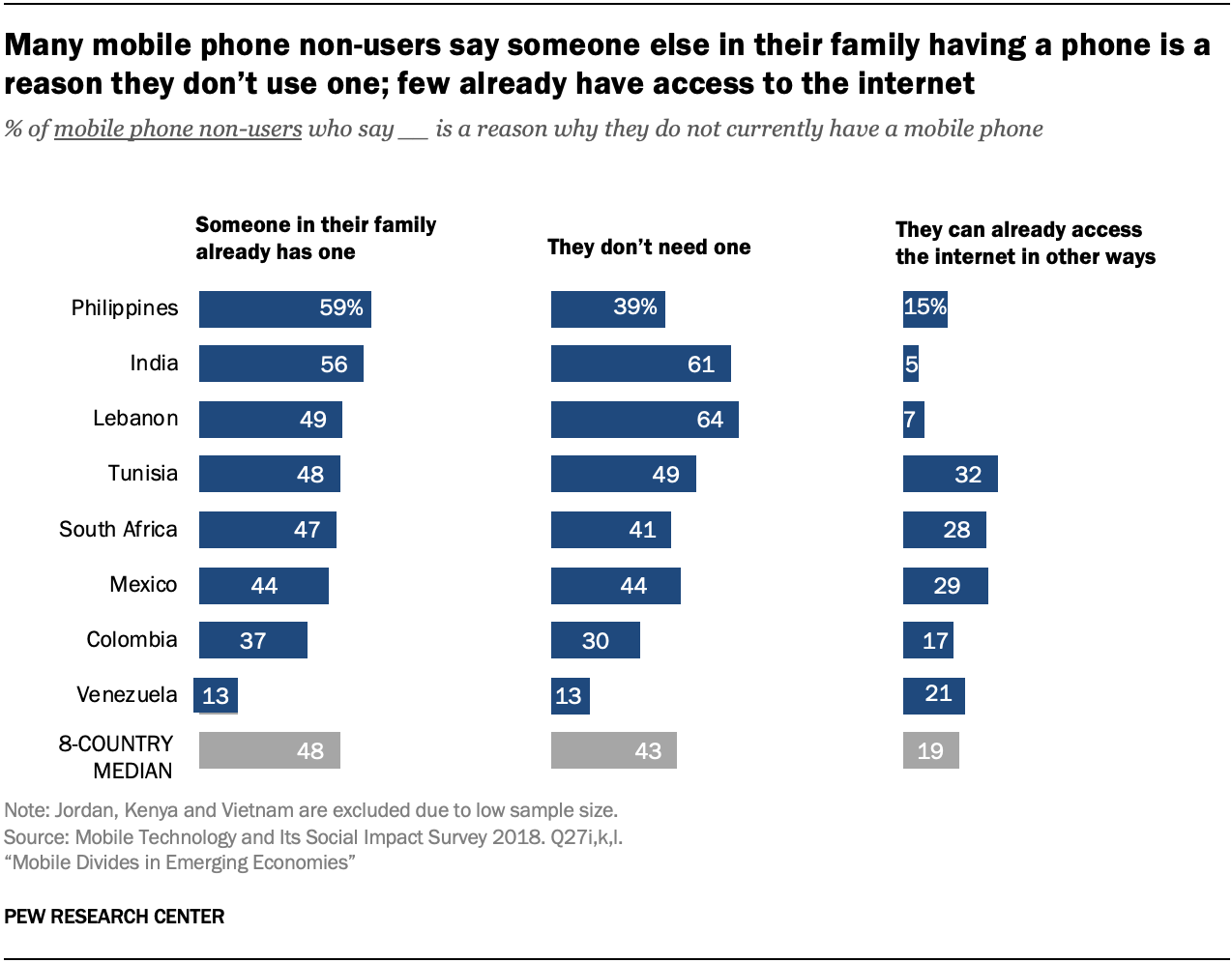 In addition, some also say they opt not to use a phone simply because they perceive phones to be too complicated. Across the eight countries, a median of 43% say this is the case for them. It is not just smartphones that non-users may see as too complicated. In Mexico – the country where feature phone ownership is highest – 58% of non-users say that perceived difficulty is part of their rationale for not using mobile devices. In Lebanon, too, around half of non-users say the difficulty and complexity of phones affects them.

Literacy, language difficulties can be an obstacle to mobile-phone use 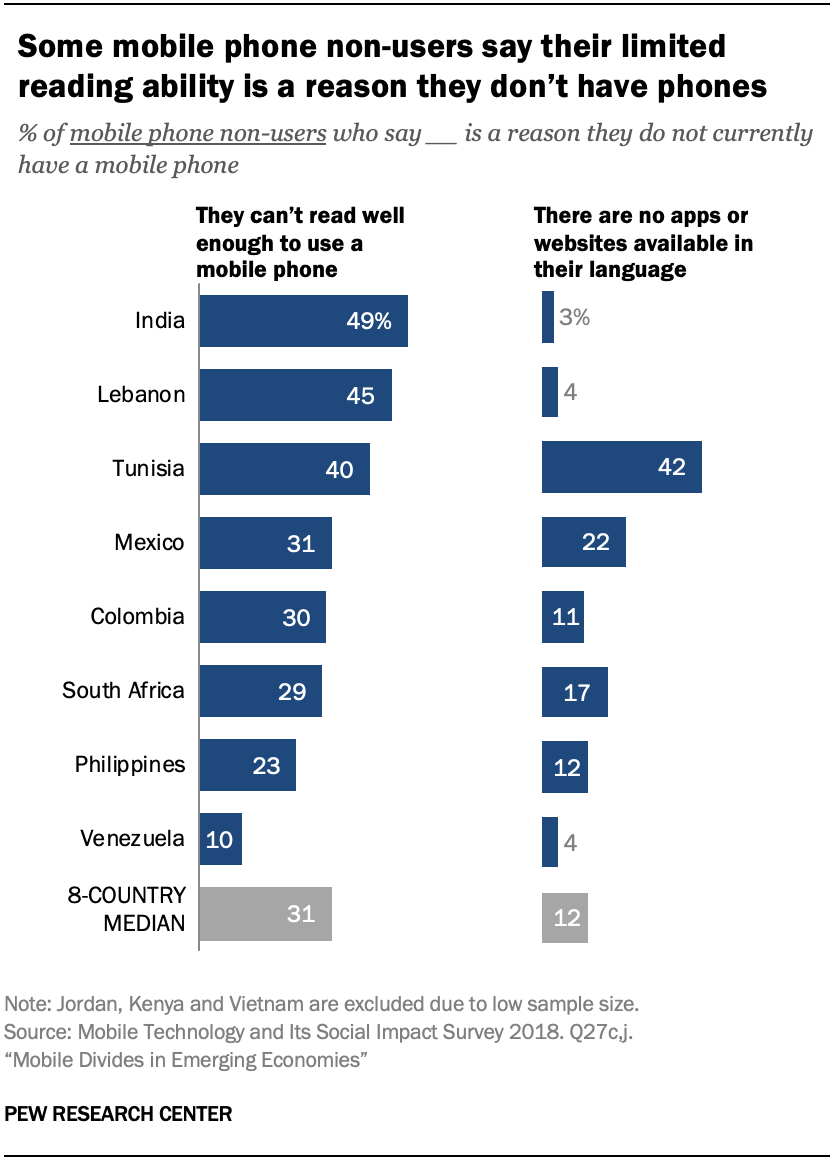 For those with limited reading abilities, mobile phones may hold less appeal, even though technology companies are working to make communication via voice activation, image and video easier for less-literate users.

This survey shows that people’s evaluations of their own reading ability contribute to whether they have a mobile phone. Across the eight countries, a median of 31% say their own limited reading ability is a factor in why they don’t use a device.

In most countries, the availability of applications and websites in people’s preferred languages is rarely cited as an issue. Across the eight countries, a median of 12% say the fact that they can’t find information in their desired language on apps or websites contributes to their lack of phone use. Only in Tunisia and Mexico do one-in-five or more non-users say this is a factor for them. 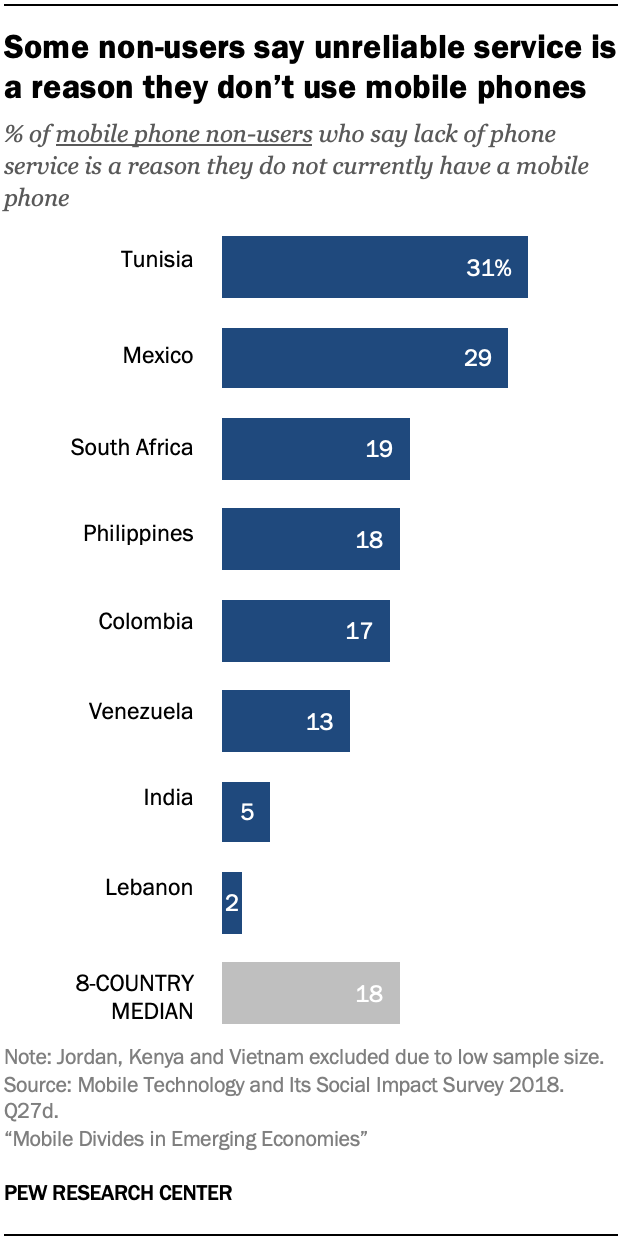 Although access to reliable mobile service varies across the countries surveyed, lack of service is not a key reason most non-users give for why they don’t use mobile phones.

Across the eight countries, a median of 18% say limited mobile service is a reason they don’t use mobile phones, ranging from a high of 31% in Tunisia to a low of only 2% in Lebanon. 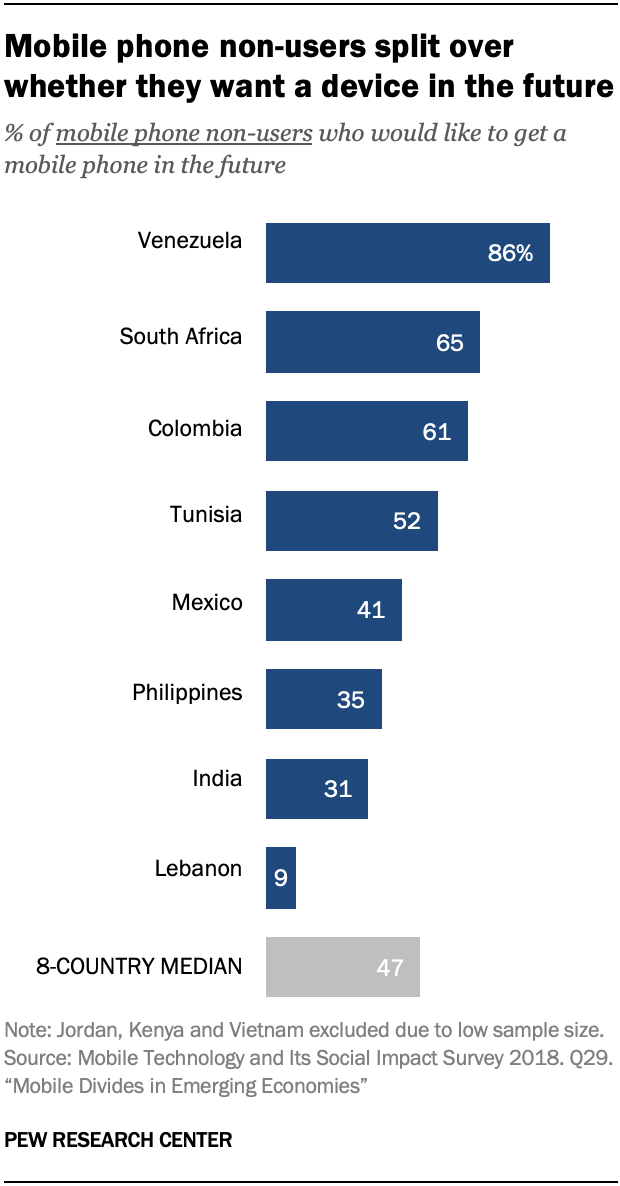 Next: 2. Phone sharers: What limits their mobile use?
← Prev Page
Page1You are reading page2Page3Page4Page5Page6Page7Page8Page9Page10Page11
Next Page →

Mobile Divides in Emerging Economies
1. Non-mobile phone users: What hinders their access?
The share of mobile phone non-users varies in emerging economiesMultiple factors contribute to why people don’t use mobile phones
2. Phone sharers: What limits their mobile use? 3. Mobile owners: What they struggle to do 4. Obstacles to using phones Acknowledgments Methodology Appendix A: About the focus groups Appendix B: How the hardship scales were created and coded Appendix C: Co-occurrence rates for each country Appendix D: Older people, more affluent tend to have fewer hardships using mobile devices