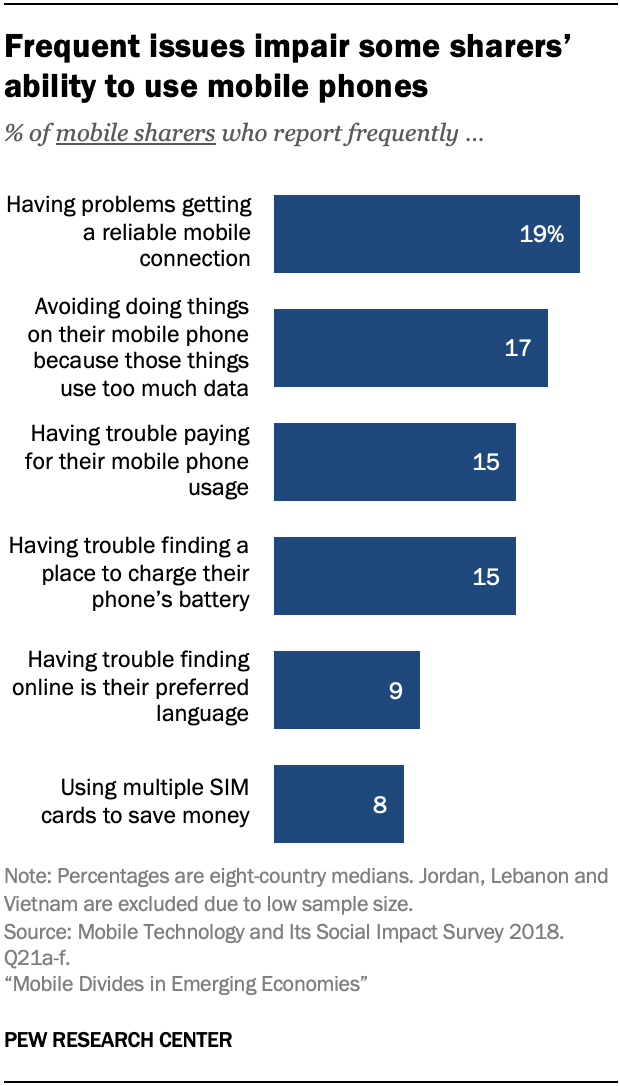 A median of 7% across the 11 countries surveyed say they do not own a phone but do use someone else’s regularly. Although there are relatively few sharers in each country, they face the challenge of relying on others for their connectivity. Many individuals who share a mobile device report struggling financially with owning and maintaining a mobile phone.

Connectivity and language barriers also color many mobile sharers experiences, but few experience these issues on a frequent basis. For example, medians of no more than one-in-five report frequently experiencing any of the potential hardships they were asked about, though many say they have some difficulties at least occasionally.

Phone sharing is relatively rare in most of these 11 countries – ranging from just 1% in Vietnam to a high of 17% in Venezuela. As sharing is relatively uncommon, only eight counties have sufficient sample sizes (roughly 100 or more sharers) to allow for additional analysis of sharers’ experiences.

Sharing tends to be more common among adults with less education and lower levels of income. For example, 12% of Filipinos with lower levels of educational attainment report sharing a phone, compared with 4% of those with more education. Lower income is a factor in countries like India, where individuals with lower incomes (17%) are nearly twice as likely to share a phone as those with higher incomes (9%).

In India – where women are less likely than men to own their own mobile phones – significantly more women (20%) than men (5%) report sharing a device with someone else. In other countries, there are small or no differences between men and women with regard to their likelihood of sharing a phone. 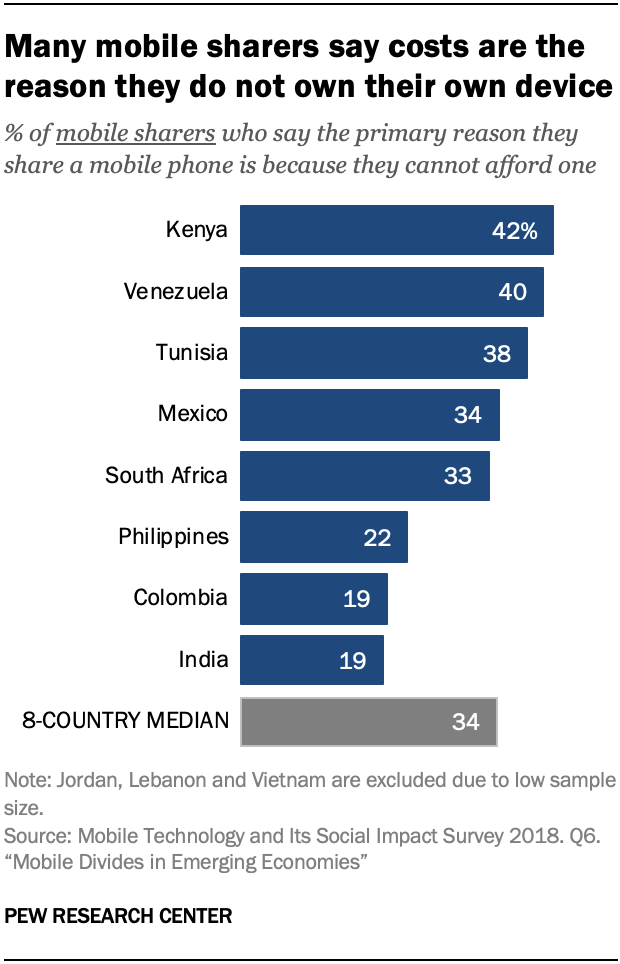 Mobile phone sharers often say they use other people’s phones, rather than their own, because of the costs associated with mobile connectivity. When asked for the primary reason they share a mobile phone, an eight-country median of 34% say they do so largely because they cannot afford their own. This ranges from a high of around four-in-ten in Kenya (42%), Venezuela (40%) and Tunisia (38%) to a low of 19% in Colombia and India. In Colombia, India, Mexico, Tunisia and Venezuela, a plurality of phone sharers cite this as the main reason why they don’t own a phone.

I can’t afford to buy one [a smartphone] as I need to spend money on other things.Man, 50, Tunisia

Majorities of mobile phone sharers in five of the eight countries also report that there were times when they did not have enough money to buy mobile data in the last year.

To get a sense of how sharers’ struggles to pay for their phones and data compare with their difficulties in affording other key expenses, the survey asked if there had been times during the past year when people did not have enough money to afford purchases of food, health care and clothing. In most countries, a majority or near-majority of mobile sharers consistently struggled with expenses in all these areas, including mobile data. 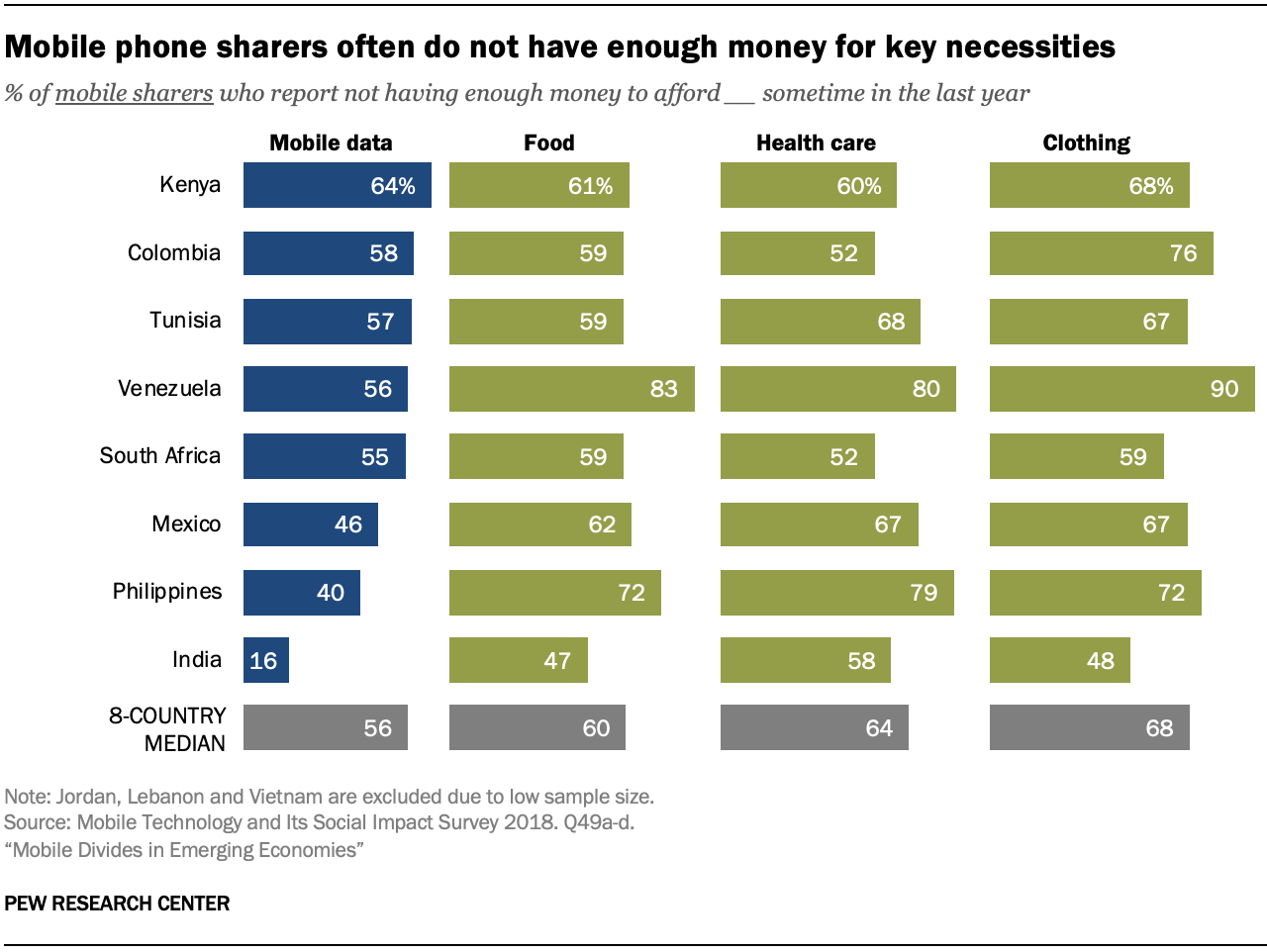 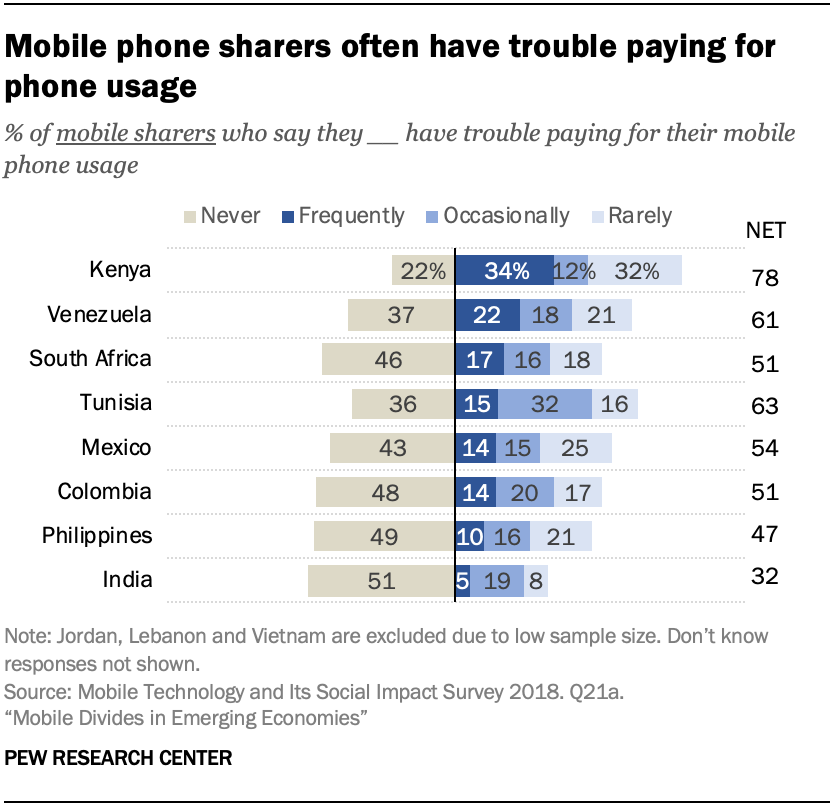 In some cases, like Kenya and South Africa, the frequency with which mobile sharers struggled to pay for mobile data was similar to their struggle with some other expenses. In other countries such as Venezuela, Mexico, the Philippines and India, however, it was more likely the case that more mobile sharers struggled to afford paying for food, health care and clothing expenses. For example, about two-thirds of Mexican mobile phone sharers could not afford food (63%), medical care (67%) or clothing (67%) in the past year. That compares with 46% who say there were times in the past year they did not have enough money to pay for mobile data.

And, around a quarter or more in Kenya (34%) and Venezuela (22%) report frequently having trouble paying for their mobile phone use. One-in-ten or more say the same in every country other than India.2

Using the internet on phones also requires a lot of money; people spend a lot of money on the phone bills today, repairing is also costly.Woman, 23, Tunisia 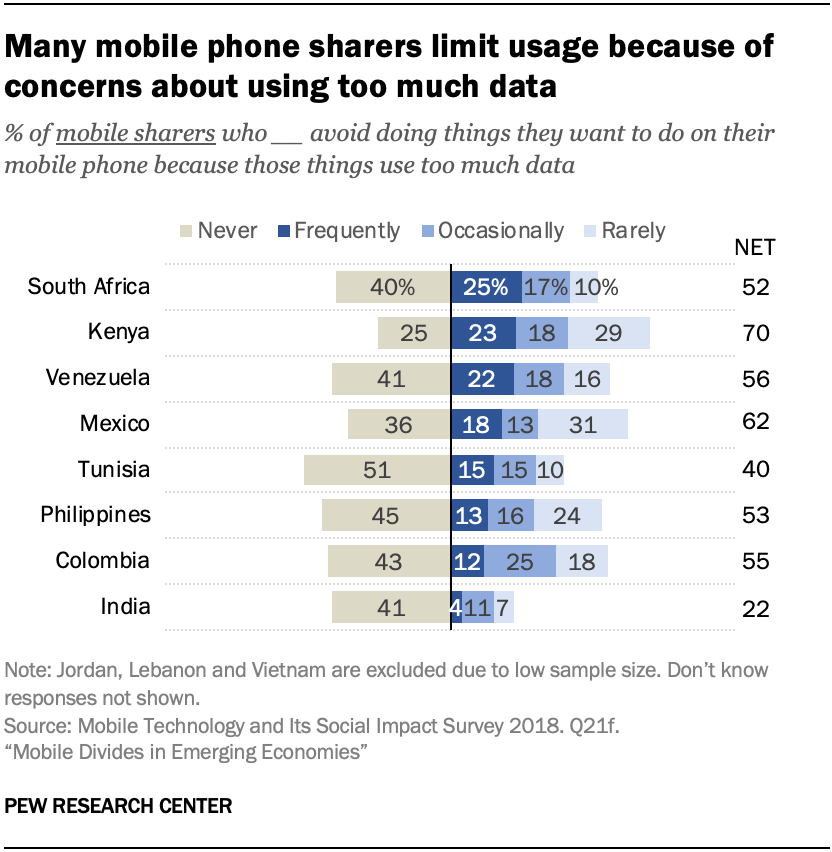 Concerns about mobile phone costs may cause some people to limit their data usage. Around half or more mobile phone sharers in six of eight countries report avoiding certain activities on their phones because those things use too much data. Sharers in South Africa (25%), Kenya (23%) and Venezuela (22%) are most likely to report frequently avoiding using their phones due to data usage concerns.

I have to use my data bundles, so I restrict what I see. So sometimes I do not go on Instagram because it consumes a lot of bundles.Woman, 24, Kenya 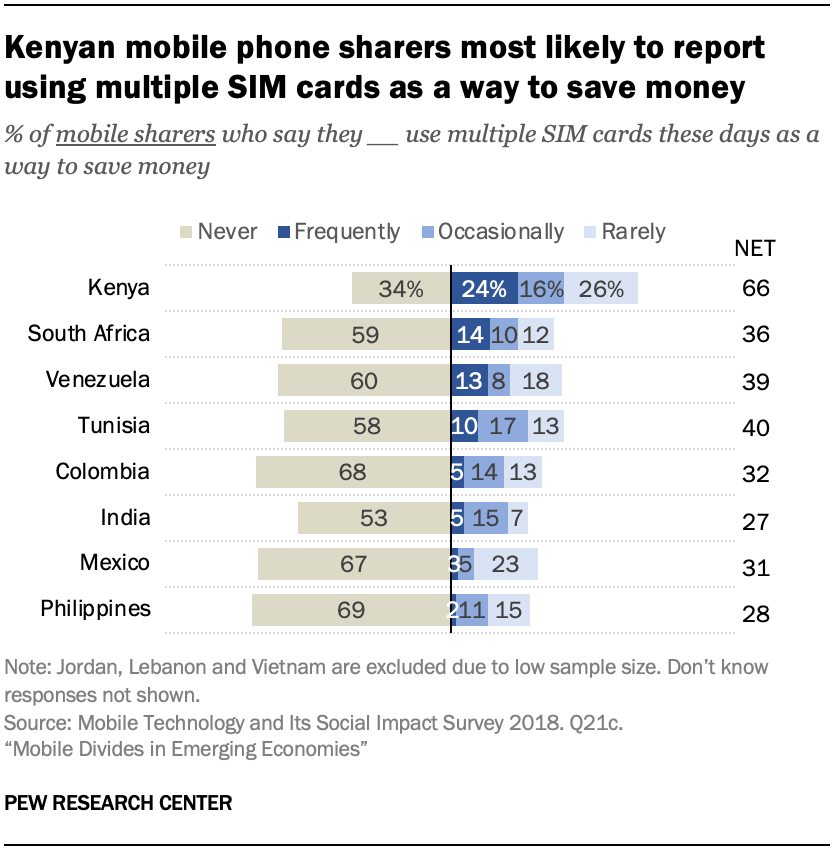 Cost concerns may also lead some mobile phone users to use multiple SIM cards. This technique may be more useful in some countries than others, as cost-saving strategies. For example, some phone companies offer cheaper rates for users to communicate with people in the same network rather than across networks.3

Now if I go to [a remote village], I will not use the Airtel line, I will use the Safaricom. Normally, Airtel is cheaper than Safaricom.Woman, 24, Kenya

Across the surveyed countries, phone sharers in Kenya were the most likely to report that they have used multiple SIMs as a way to save money. This practice is least common in the Philippines, Colombia and Mexico, where around two-thirds in each country report never doing so.

Concerns about security may lead some to share, rather than own, phones 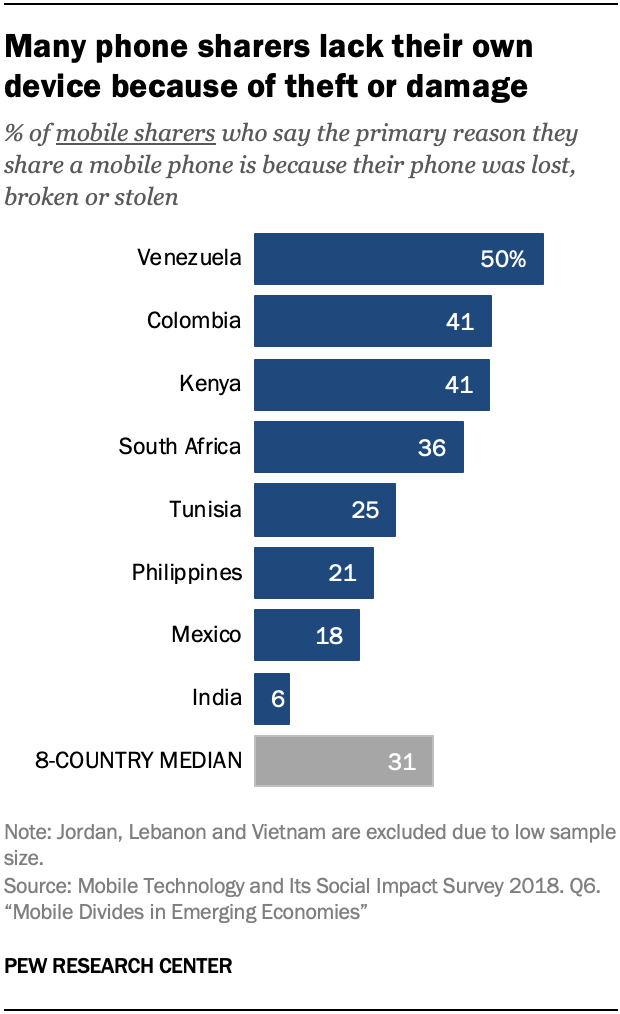 Mobile phone sharers may also opt not to have their own devices in part because of security concerns, though this is a lesser concern for most mobile phone sharers than financial or connectivity-related issues. Very few individuals report that fear of their phone being stolen is the main reason for sharing a mobile phone. These fears are highest in Colombia, where 8% say fear of their phone being stolen is the primary reason they do not have one. Elsewhere, no more than 3% cite this as their primary reason for lacking their own device.

Still, even if concerns over phones being stolen is not a dominant reason that many lack their own devices, in some countries, many sharers currently lack access because a past device of theirs was lost, broken or stolen. Half of Venezuelan mobile phone sharers say this is the primary reason they share a device. About two-in-five in Colombia (41%) and Kenya (41%) also report this reason.

I was robbed my address, my data … They enter there and see all your pictures. All that you have is taken away from you, and you don’t know who can see all that.Woman, 34, Mexico

Security concerns may also extend beyond people’s fears about theft of the device. Those worries might also apply to the information contained within the phone. Around two-thirds or more sharers from each country report concerns about identity theft. More than nine-in-ten mobile phone sharers in Colombia (94%), Mexico (94%), Venezuela (92%) and the Philippines (91%) say they are at least somewhat concerned. Further, outside of India and Kenya, at least half of mobile phone sharers in every country report being very concerned about this issue. 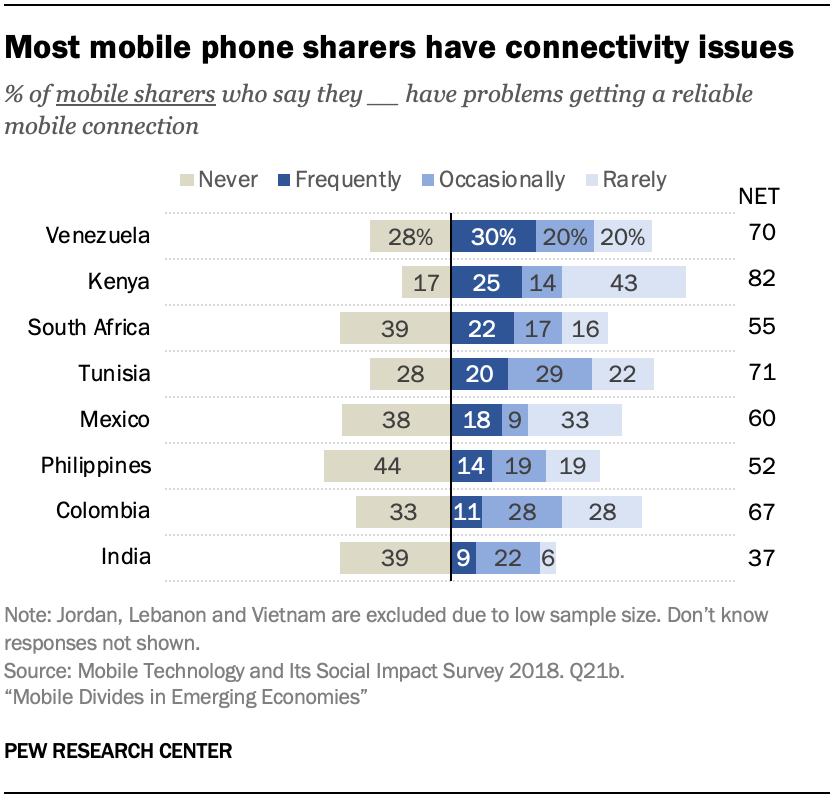 In addition to financial and security hardships, many mobile phone sharers report experiencing problems with connectivity. In every country, around half or more say they had difficulty getting a reliable mobile connection at least every so often. Those in Venezuela (30%) and Kenya (25%) are most likely to report frequently having mobile connection issues. 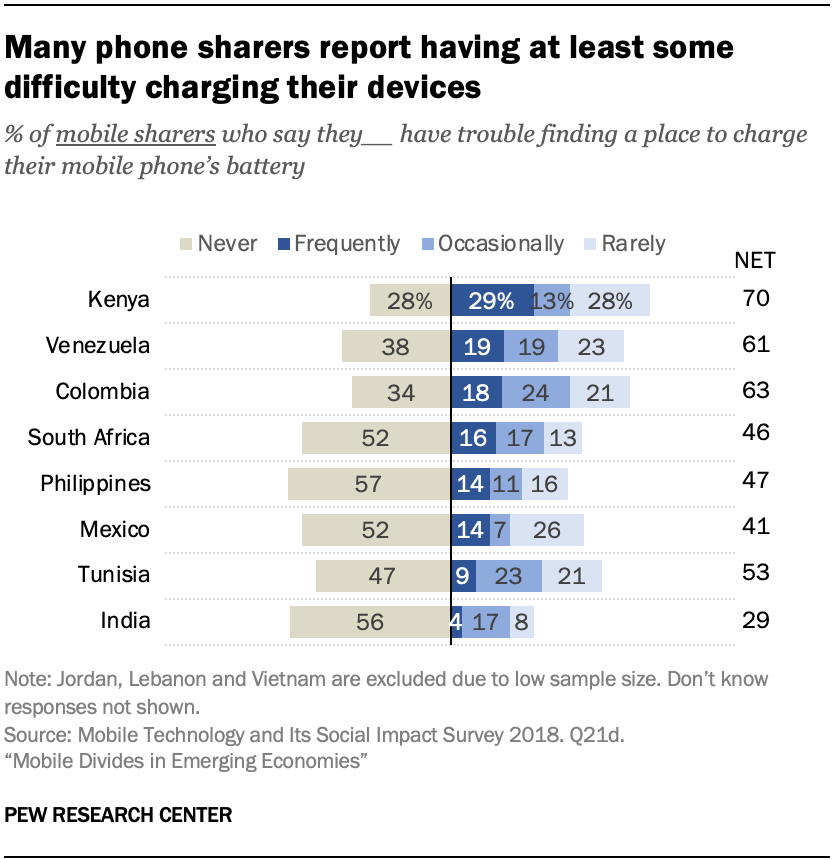 Mobile phone use may not only be restricted by these sharers’ mobile connection but also by their access to charging locations. Again, Kenyan mobile sharers (70%) are most likely to report having trouble finding a place to charge their phone, and Kenyans (29%), Venezuelans (19%) and Colombians (18%) are the most likely to report that this is a problem they frequently experience.

In some countries, an additional connectivity hurdle may be whether they are allowed to use a mobile phone due to familial or societal constraints. But, when asked whether this was the primary reason people shared, rather than owned, a phone, fewer than 5% in any country cited it as their primary reason.

Once my phone was uncharged at work and it shut down, when I put in charge to turn it on and I found like more than 10 calls from work, and that caused me trouble. Man, 43, Tunisia

Difficulties with language, technology may encumber some phone sharers 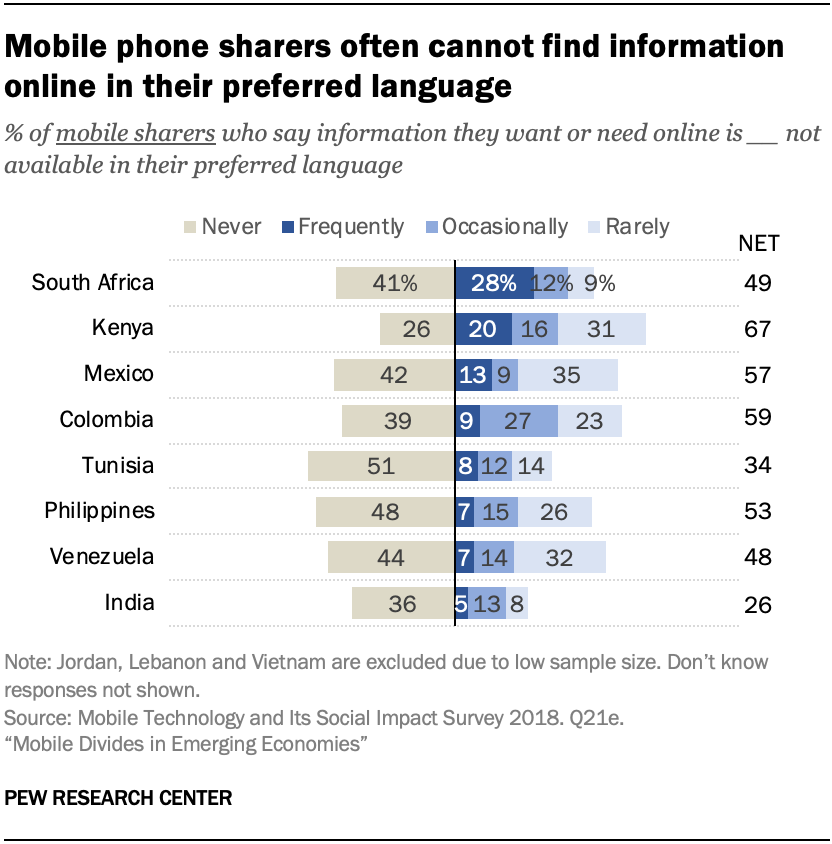 Language barriers may also be a difficulty that mobile phone sharers face when using technology. Over half of mobile phone sharers in four of eight countries report that information they want or need online is, at times, not available in their preferred language. South Africans (28%) and Kenyans (20%) are most likely to report this happening frequently, while Tunisians (51%) are most likely to say it never happens.

As a substantial portion of web content is available in English, being able to read at least some English can allow for more content to be accessible to users. However, mobile sharers are less likely to say they can read English than mobile owners in every country surveyed. For example, 44% of Venezuelan mobile owners can read at least some English, compared with 28% of Venezuelan mobile sharers. 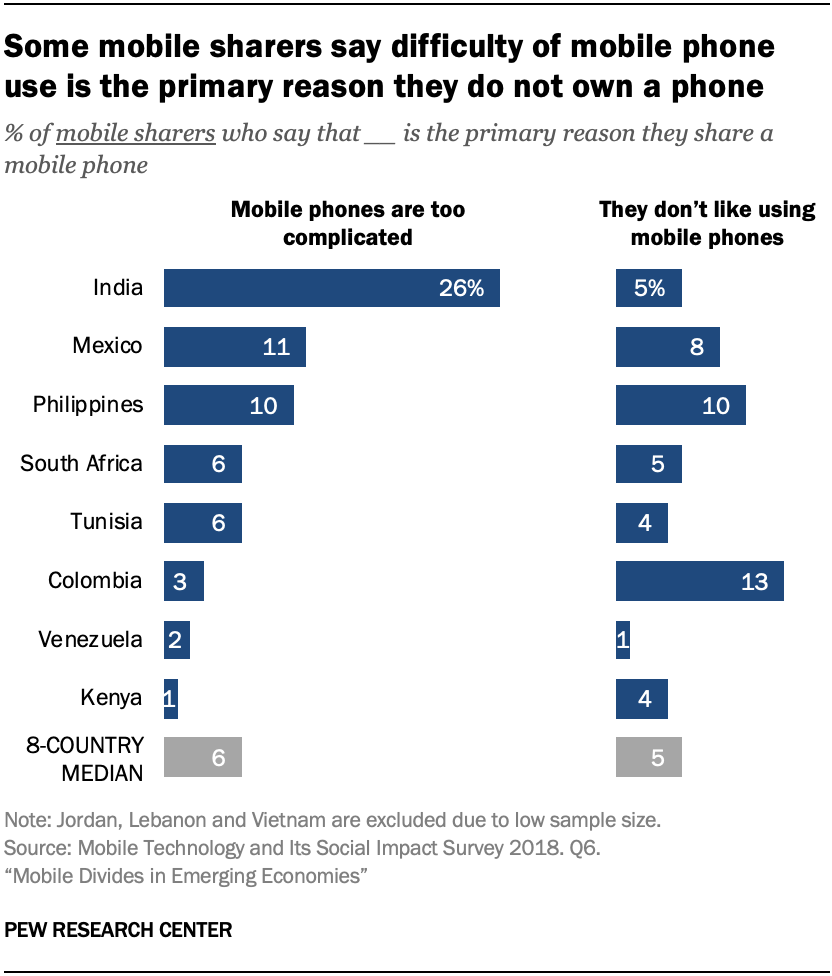 While some mobile phone sharers simply don’t like using mobile phones, this is not a dominant reason people share, rather than own, mobile technology. Colombians (13%) are most likely to cite not liking using mobile phones as their primary reason for sharing a phone, followed by Filipinos (10%). Almost no Venezuelans (1%) report this issue.

Next: 3. Mobile owners: What they struggle to do
← Prev Page
Page1Page2You are reading page3Page4Page5Page6Page7Page8Page9Page10Page11
Next Page →

Mobile Divides in Emerging Economies 1. Non-mobile phone users: What hinders their access?
2. Phone sharers: What limits their mobile use?
Few in emerging economies share mobile phonesMany share phones because of financial constraintsConcerns about security may lead some to share, rather than own, phonesLack of reliable connections also impede mobile phone sharersDifficulties with language, technology may encumber some phone sharers
3. Mobile owners: What they struggle to do 4. Obstacles to using phones Acknowledgments Methodology Appendix A: About the focus groups Appendix B: How the hardship scales were created and coded Appendix C: Co-occurrence rates for each country Appendix D: Older people, more affluent tend to have fewer hardships using mobile devices